The sixteenth century saw the evolution of modern cartography emerge out of a renaissance in Ptolemaic cartography. In the second half of the century the Netherlands played a leading role in this process. I have already blogged twice about Gerard Mercator the man most closely associated with the modern cartography, here and here, and also about his teacher Gemma Frisius, so today I want to turn my attention to Mercator’s friend and rival Abraham Ortelius.

He was born Abraham Ortel (as we most Renaissance scholars there are numerous variant spellings of the family name) in Antwerp on 14 April 1527, to where his grandfather William had moved the family from Augsburg in Southern Germany in 1460, supposedly because of religious persecution. The son of a merchant who died whilst he was still young, in about 1535. Ortelius studied mathematics, Latin and Greek as a youth and apprenticed as an engraver of maps and entered the Antwerp guild of map illuminators in 1547. He set a shop trading in books, prints and maps with his sister and became an engraver for the highly influential Plantin publishing house. Through his various activities as a trader Ortelius came to travel extensively throughout Europe, visiting all the regions of Germany, Italy, France, England and Ireland.

He met and became friends with Gerard Mercator at the Frankfurt book Fair in 1554. In 1559-1560 he accompanied Mercator on his cartographical expedition through Trier, Lorraine and Poitiers. It was during this trip that Mercator is supposed to have persuaded his friend to not just engrave and colour other people’s maps but to become a cartographer in his own right.

Following the example of his mentor, Ortelius started out producing single maps sold as prints. His first effort was an eight-sheet world map produced in 1564. This was followed by a two-sheet map of Egypt (1565), a single-sheet map of the Holy Land in 1566, a two-sheet map of Asia (1567) and a six-sheet map of Spain (1570). Ortelius’ entry into the map business was a success. Gemma Frisius, Mercator and Ortelius were all cartographers and businessmen. However, whereas it is safe to say that Gemma Frisius and Mercator were cartographers first and businessmen second in the case of Ortelius it was the other way round; he was very much a businessman first and a cartographer second.

Given the massive increase in international trade and the travel involved in it, there was a strong increase in the demand for good maps. To save themselves the trouble of carrying around large bundles of loose maps various people had started collecting together maps from various sources and binding them together in a book. However, the maps in such collections were of different styles, varying qualities and highly varying usefulness. Ortelius and his business partners came up with the idea of printing and publishing a comprehensive collection of maps of uniform size all in the same style and containing the most up to date geographical data available. Published by Ortelius and printed by Egidius Coppens van Diest the first edition of Ortelius’ Theatrum orbis terrarum (the first modern atlas!?) containing fifty-three maps appeared in 1570. 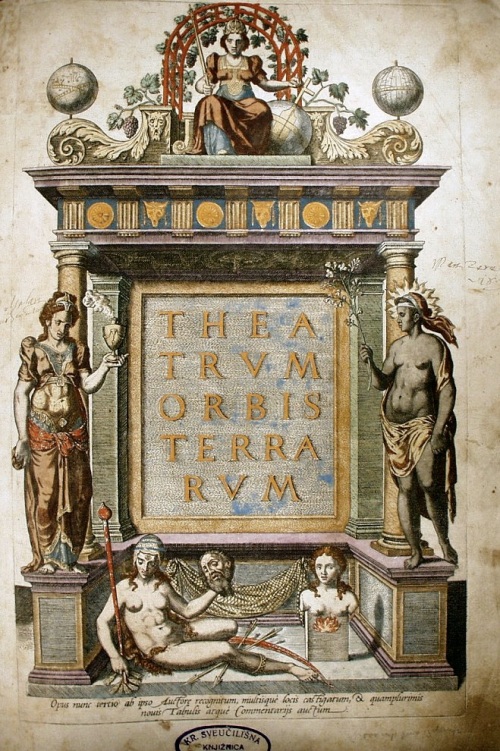 Ortelius didn’t produced the maps from scratch himself but relied on the maps of other cartographers, modifying and improving them as he reproduced them in his uniform style oft incorporating elements of several maps into his finished product. This method of working was not new but had been employed by the leading cartographers throughout the sixteenth century, where Ortelius differed was in that he included a Catlogus cartographorum, a list of eighty-seven cartographers whose work he had used to compose his Theatrum. The Theatrum was a major success going through forty editions between 1570 and 1624. As well as numerous Latin editions there were also several editions each in German, French, Italian, Spanish and English. The Theatrum was very definitely a sixteenth-century bestseller.

Map of the Persian Empire from the Theatrum Orbis Terrarum
Source: Wikimedia Commons

One of the most important features of the Theatrum was its evolution. Each new edition would be modified and updated with as much new information as Ortelius could obtain.

Of interest is a pocket sized version, or epitome, of the Theatrum that was published by Philips Galle and printed by Plantin beginning in 1577. Like the original this too went through many editions in several different languages, the first edition having been in Dutch.

The evolution of the Theatrum between its birth in 1570 and Ortelius’ death in 1589 is a wonderful example of the so-called Republic of Letters in operation in the Early Modern Period. Ortelius had connections all over Europe and even further afield amongst the scholars of his day. Through correspondence they supplied him with the information he needed to update and modernise his maps. Also supplying the geographical and historical information with which he annotated later editions of his magnum opus. This information network worked in both directions with Ortelius passing on information he had received from one member of the network to others he thought might be interested. This correspondence did not only deal in matters geographical and cartographical but also included much information from all the various branches of natural history. An impression of Ortelius’ correspondence network can be gained from his Album Amicorum (friendship book), which he maintained from 1574 to 1596. It has 130 entries that read like a who’s who of the European intellectual elite of the period. 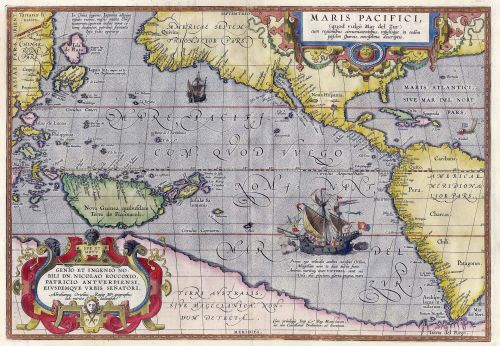 Maris Pacifici, 1589, the first dedicated map of the Pacific to be printed
Source: Wikimedia Commons

Ortelius’ second major geographical work was his Synonymia Geographica sive Popularum, Regionum, Insularum, Urbium… Appelationes et Nomina, originally an appendix in the Theatrum but then published in expanded form as a separate volume beginning in 1578. This is a list of classical place names identifying their modern locations based on Ortelius’ own historical research, an important research tool for anybody studying classical works.

Another minor claim to fame possessed by Ortelius is that he appears to be the first person to have suggested a theory of continental drift based on his recognition that the continents surrounding the Atlantic basin seemed to fit together. He suggested that the Americas had been torn away from Europe and Africa by earthquakes and floods. His theory fell on deaf ears in his own times.

We still have one rather important linguistic question to clear up. If the ‘first modern atlas’, was entitled the Theatrum orbis terrum by Ortelius, its creator, then why do we call a collection of maps an atlas?

Almost at the same time as Ortelius, his friend Mercator embarked on a very similar project if his motivation was somewhat different. I have blogged about Mercator’s map collection, which he called an atlas already here so I won’t repeat the story now. Mercator’s book only appeared in full, bearing for the first time the title Atlas, posthumously in 1595, twenty-five years after the first appearance of the Theatrum. Although Mercator’s work was without doubt superior to Ortelius’, the later was already a well-established best seller and the larger more complex work of Mercator failed to seriously challenge the market leader. Had the situation remained as it was, we would probably still refer to a bound collection of maps as a theatre. In case you are wondering Ortelius’ original title translates as something like view of the earthly globe. However at the end of the 1590s things changed. Ortelius died and although his Theatrum continued to appear until 1624 nobody took the trouble to update it. On the other hand Mercator’s son died in 1599 and Jodocus Hondius a cartographical publisher and globe maker from Amsterdam bought up the rights to Mercator’s Atlas. Hondius did update and modify Mercator’s work and so took over dominance in the market. In 1624 Hondius’ biggest rival Willem Janszoon Blaeu bought the rights to Ortelius’ Theatrum incorporating it into his own map book that he titled an atlas in imitation of Hondius. And so it is that we now call a bound collection of maps an atlas and not a theatre.

11 responses to “Abraham Ortelius and the 16th century information age.”