I was awoken this morning by the news (I have a radio alarm tuned to a news broadcast!) that 16 year old Jessica Watson had just completed her solo round the world sailing trip, thus becoming the youngest and most recent person to do so. Now as we were all taught at school the first person to circumnavigate the globe was the Portuguese explorer Ferdinand Magellan (c. 1480 – 1521). What most people don’t know or don’t realise is that Magellan personally didn’t circumnavigate the globe as he unfortunately died on route and in fact from his flotilla of five ships and 237 men only one ship and 18 sailors completed that first round trip. The Basque seaman Juan Sebastián Elcano who took over command of the expedition after Magellan’s death should actually receive the laurels for the first circumnavigation.

Even less people know that Magellan’s journey is closely linked to one of my favourite obscure Renaissance Mathematicae, the Nürnberger schoolteacher Johannes Schöner, a man who is a significant footnote in the history of science as the addressee of Rheticus’ Narratio Prima the first printed published account of Copernicus’ heliocentric theory. Before I reveal the connection to Magellan’s, or better said Elcano’s, historical feat I will set the scene with a brief survey of Schöner’s life. 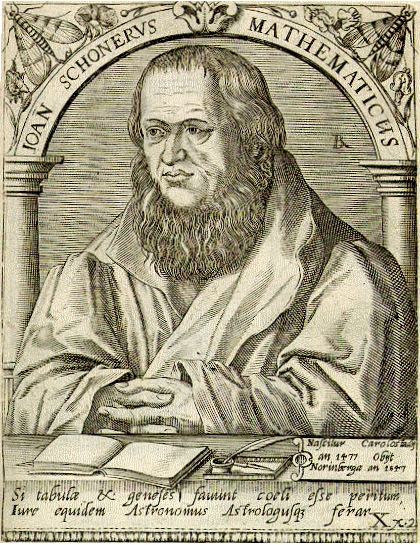 He was born on the 16th January 1477 in the Lower Franconian town of Carlstadt am Main and that is the sum total of all that is known about his origins and childhood, except that he had a brother for whom he wrote a book on do-it-yourself medicine later in life. He attended the University of Erfurt, where one of his contemporaries was the slightly better known Martin Luther. He graduated BA and around the turn of the century was anointed into the priesthood. He served in a number of minor clerical appointments in Franconia until at the latest 1511 and probably a least six years earlier he was appointed to the chapter of a religious endowment in the Cathedral City of Bamberg, then one of the most important and powerful bishoprics in Germany. The appointment was a sinecure and Schöner was almost certainly employed as court mathematicus to the Bishop of Bamberg as various church records seem to confirm. This was by no means unusual and several of Schöner’s mathematical contemporaries enjoyed similar sinecures. Sometime before 1515 Schöner acquired a printing press and the knowledge how to use it and in 1515 he produced the world’s first serial production printed terrestrial globe. There is some evidence that Martin Waldseemüller, the cartographer famous for mistakenly having given America its name, may have produced printed globes before Schöner but none of these globes exists and as the gores (of which more later) that exists obviously based on his 1507 world map are not dated it is not possible to confirm this. Now Schöner did not just produce a globe but also a cosmographia that is a book designed to be sold with the globe containing further geographical information to the maps on the globe, principle cities with population statistics, major exports etc and also instruction on how to use the globe. In 1517 he printed and published a matching celestial globe with accompanying book of instructions. Why books of instructions? Today most people regard globes as three dimension maps but from Schöner’s invention of the printed globe pair, and they were almost always produced in pairs (terrestrial/celestial), till the late 19th century globes were educational scientific instruments. They were teaching aids used to teach astronomy, astrology and applied astronomy i.e. cartography, navigation, determination of longitude, latitude, distances and time differences between geographical locations and the teaching of spherical trigonometry. With his first globe pair Schöner set norms and standards for globe design and production that remained largely unchanged until the beginning of the 20th century. Schöner’s first terrestrial globe has one remarkable feature, at the bottom of a surprisingly accurate South America it appears to display the Straits of Magellan four years before Magellan discovered them. This is actually an illusion. Schöner’s globe is largely Ptolemaic in form and he had merely added Ptolemaeus’ hypothetical southern continent Australia south of the southern tip of America thereby creating a strip of water that bears an uncanny resemblance to Magellan’s Straits.

Schöner’s globe production was very successful and he was soon established as one of the leading mathematical practitioners of Europe however in 1522 a disaster occurred in his life, his patron the Bishop of Bamberg died. Schöner did not take his clerical status seriously and apart from collecting his stipend he had nothing to do with the church. He lived together with a concubine, officially sanctioned by the Bishop, with whom he had a gaggle of children. Happy to have a mathematicus of his quality the old Bishop had ignored Schöner’s private life. The new Bishop was of a different mould and although he also respected Schöner’s mathematical ability he deprived Schöner of his appointment and banished him to the village of Kirchehrenbach. (That’s Kirchehrenbach at the foot of the Walberla in Dürer’s print Nürnberger Feldschlange) Today Kirchehrenbach is a picturesque rural town that sits at the bottom of the Ehrenberg the highest mountain in Franconian Switzerland, known locally as the Walberla because of the chapel to St. Walpurga on its summit, much loved by weekend day-trippers from the surrounding towns and cities. In the early 16th century it was the back end of beyond and Schöner hated it. This was also the period of the Peasant’s War and Schöner as one of the local Catholic clerics was three times attacked and robbed by local farmers so in 1525 he returned to Bamberg hung up his priest’s gown and left the church. In 1525 Nürnberg became the first Lutheran protestant state, at that time Nürnberg was a self governing city-state, and invited Philipp Melanchthon to create a new school for the city. Melanchthon obliged and created Germany’s first gymnasium, still today the flagship of the German secondary education, under the direction of Joachim Camerarius, Melanchthon’s friend and later biographer, and in 1526 Schöner was appointed its first professor for mathematics. Schöner’s career progressed successfully with astronomical, astrological and mathematical publications and he was generally recognised as one of the leading mathematical practitioners of the age with a European reputation. In 1533 he produced a new pair of globes incorporating the newest geographical discoveries into the cartography.

16th century globes were made of papier mâché and so very fragile and expensive to transport, because of this a printer in Leuven asked the local professor of mathematics Gemma Frisius to make copies of Schöner’s globes that he then marketed with reprints of Schöner’s books. Frisius’s assistant was Gerardus Mercator, he of the projection, who later produced his own globes based on the Schöner concepts that became the model for the Dutch globe industry in the 17th century. The Dutch manufacturers totally dominating the world market for almost 100 years and so Schöner’s invention became part of Europe’s scientific culture.

In 1538 Schöner was visited by the young Wittenberg mathematics professor Rheticus who came to study astrology at the feet of the master, Schöner being by now the leading European astrologer and so he became the addressee of the Narratio Prima. Schöner died in 1547 on his 70th birthday an honoured and respected pillar of the European scientific community.

So what does all of this have to do with Magellan and the first circumnavigation? As Schöner was in Kirchehrenbach in his banishment he tried to curry favour with his Bishop in that he dedicated his newest terrestrial globe to him, produced in 1523 this globe featured the route of Magellan’s circumnavigation only one year after those 18 seamen struggled back to Spain. At least we think he did! The accompanying cosmographia for the globe exists but none of the globes has survived the ravages of time. How did Schöner manage to transfer the knowledge of this epic voyage so quickly into a printed globe? In this day and age where the news of Ms Watson’s achievement is blasted around the globe in all form of media within seconds of her landfall we tend to forget that such news sometimes took years to permeate through Europe in the 16th century. At the instigation of Cardinal Matthäus Lang a great sponsor of science in this age Maximilianus Transylvanus interviewed the survivors in Spain and published his account of the voyage in 1523 and it was this account, which Schöner, who made sure to always acquire the latest travel reports through a network of contacts, used to make his globe. I said that none of his Magellan globes have survived but there is a set of globe gores in New York that appear to be those of Schöner’s 1523 globe. Globes were printed on gores, these are strips of paper shaped like segments of an orange that were then glued on to a papier mâché sphere and coloured by hand. The set of gores in New York have Schöner’s cartographical style and Magellan’s route printed on them and although there are some dissenting voices, in general the experts think that they are Schöner’s original.

26 responses to “Circumnavigating the Globe”