Erdapfel is the word for potato in my local Franconia dialect, in fact in most of Southern Germany and Austria. In High Germany a potato is ein Kartoffel. Don’t worry this is not a post about root vegetables or variations in German regional dialects. Der Erdapfel is also the name given to the so-called Behaim Globe, the oldest known surviving terrestrial globe, Nürnberg’s most famous historical artefact. The name, which literally translates as Earth Apple, is thought to be derived from the medieval term Reichsapfel (Empire Apple), which was the name of the Globus Cruciger, or orb, as in orb and sceptre, the symbols of power of the Holy Roman Emperor; the orb symbolising the earth. The Behaim globe, which was conceived but not constructed by Martin Behaim, is together with Behaim, the subject of many historical myths. 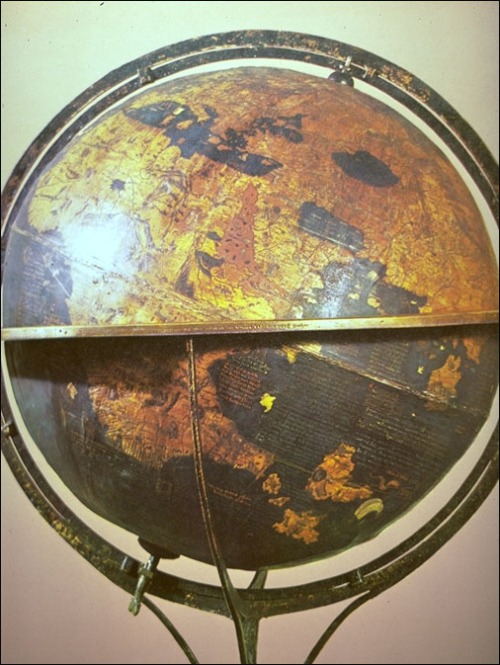 Martin Behaim was born in Nürnberg in 1459 and lived with his parent on the market place next door to the businessman Bernhard Walther (1430–1504) who was the partner to Regiomontanus in his printing and astronomical activities during the last five years of his life living in Nürnberg. Martin’s father was one of the rich traders, who dominated Nürnberg culture. In 1576 he was sent away to Flanders to apprentice as a cloth trader. In 1484 he journeyed to Portugal, which is where to mythological part of his life begins. According to the traditional version of his life story he took part in two sea voyages down the west coast of Africa with Diogo Cão. He was knighted by the Portuguese king and appointed to the Portuguese Board of Navigation. All of this took place because he was supposedly a student of Regiomontanus, whose ephemerides, the first ever printed ones and highly accurate, were well known and respected on the Iberian Peninsula. All of this information comes from Behaim himself and some of it can be read in the texts on the Behaim Globe.

Artist’s impression of Martin Behaim with his globe. Artist unknown

Between 1490 and 1493 Behaim returned to Nürnberg to sort out his mother’s testament and it was during this period that he persuaded to city council to commission him to produce a globe and a large-scale wall map of the world. It is not certain if the wall map was ever produced and if it was it has not survived but the globe certainly was and it is now, as already said, the oldest known surviving terrestrial globe. It is not however, as is often falsely claimed the oldest or first terrestrial globe. The earliest recorded terrestrial globe was constructed by Crates of Mallus in the second century BCE. Also Ptolemaeus in his Geographia, in his discussion of different methods of cartographical projection, acknowledges that a globe in the only way to accurately represent to earth. The Behaim Globe is not even the earliest European medieval globe as the Pope in known to have commissioned earlier terrestrial globes, which have not survived. Given their method of construction and the materials out of which they are made the survival rate of globes is relatively low.

The globe remained the property of the city council of Nürnberg until the middle of the sixteenth century when it was returned to the Behaim family who basically threw it into the corner of an attic and forgot about it. In the nineteenth century it was rediscovered and studied by various historians of cartography and a copy was made for a museum in Paris. Unfortunately it was also ‘restored’ several times through processes that did far more damage than good. In the early twentieth century it was lent to the Germanische Nationalmuseum in Nürnberg. In the 1930s the Behaim family considered selling the globe, most probably in America, and to prevent this Adolf Hitler bought the globe with his own private money and presented it to the German nations. It still resides in the Germanische Nationalmuseum.

I said that the globe is veiled in myths and we will start to sort them out. Firstly Behaim only conceived the globe he didn’t construct it as many people believe. The globe was made by pasting strips of linen onto a fired clay ball. The ball produced by Hans Glockengiesser (a family name that translates as bell founder) and the globe constructed by Ruprecht Kolberger. After the paste had set the globe was cut free from the clay form by a single cut around its equator and the two halves we then pasted together on a wooded frame. The actually map was painted onto the linen ball by the painter and woodblock cutter Georg Glockendon and the lettering was carried out by Petrus Gegenhart. Behaim only seems to have directed and coordinated these activities. 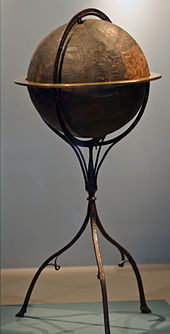 Another popular myth is that because of Behaim’s activities in Portugal the cartography of the globe is cutting edge up to the minute modern; nothing could be further from the truth. The basis of the cartography is Ptolemaeus with obvious additions from other ancient Greek sources as well as The Travels of Sir John Mandeville and The Travels of Marco Polo. Much of the cartographical work is inaccurate even by the standards of the time, including surprisingly the west coast of Africa that Behaim supposedly had explored himself, which brings us to Behaim’s personal claims. 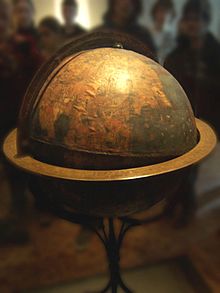 His claim to have sailed with Diogo Cão is almost certainly a lie. At the time of Cão’s first voyage along the African coast Behaim is known to have been in Antwerp. On his second voyage Cão erected pillars at all of his landing places naming all of the important members of the crew, who were on the voyage, Martin Behaim is not amongst them. They is no confirmatory evidence that Behaim was actually a member of Portuguese Board of Navigation and if he was his membership almost certainly owed nothing to Regiomontanus, as there is absolutely no evidence that he ever studied under him. The historian of navigation, David Waters, suggests that if Behaim was actually a member of this august body then it was because the Portuguese hoped to persuade the rich Nürnberger traders to invest money in their expeditionary endeavours, Behaim thus functioning as a sort of informal ambassador for the Republic of Nürnberg.

The picture that emerges is that Martin Behaim was con artist probably deceiving both the Portuguese court and the Nürnberg city council. The Behaim Globe is an interesting artefact but its historical or scientific significance is minimal. If you are in Nürnberg, I can recommend going to the Germanische Nationalmuseum to see it but when you are there also take a look at the Schöner 1520 terrestrial manuscript globe in the neighbouring room. It’s cartographically much more interesting and Schöner, as opposed to Behaim, plays a very important role in the history of globe making.