The emergence of modern astronomy – a complex mosaic: Part XXXVII

The ongoing astronomical/cosmological discussion on the nature of comets in the Early Modern Period has weaved its way continuously through our narrative. Starting with Toscanelli’s attempts to track the paths of comets, as if they were celestial objects in the mid fifteenth century, through the Europe wide discussion, amongst the leading astronomers of the period in the 1530s, leading up to the great comet of 1577 (usually called Tycho’s comet) and on to the great comet of 1618. The discussion was rekindled by two great comets in the 1660s, the great comets of 1664 (modern designation C/1644 W1)

It would not be an exaggeration to say that there was an outbreak of comet fever amongst European astronomers.

There are surviving observational reports on the appearance and path of these comets not just from Europe but also from China, Japan and North America. The earliest reported siting for C/1664 W1 was from Spain on 17 November. Samuel Pepys, who observed it together with Robert Hooke, mentions it in his famous diary and Daniel Defoe (1660–1731) included it in his fictional account of the bubonic plague in London, A Journal of the Plague Year (1722). This comet was, of course, regarded as the harbinger of both the plague and the Great Fire of London.

The Great Comet of 1664 from an anonymous pamphlet Source: Wikimedia Commons

Christiaan Huygens observed it in Leiden beginning on 2 December and his observations were included in a dissertation by the French astronomer, mathematician, physicist and instrument maker Pierre Petit (1594–1677). Giovanni Domenico Cassini (1625–1712), Geminiano Montanari (1633–1687) and Giovanni Borelli (1608-1679) all observed both comets in Italy, and Pierre Petit and Adrien Auzout (1622–1691) in Paris. Johannes Hevelius observed the comets in Danzig and published a report of his 1664 observations, Prodromus cometicus in 1665, 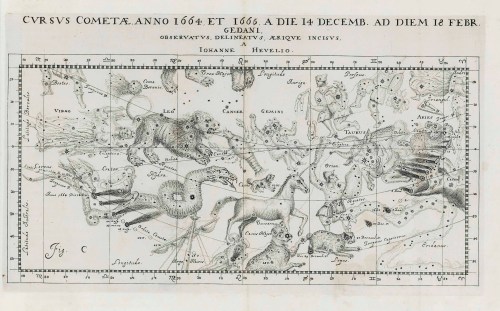 and then later a book on his observations of both comets, Cometographia (1668).

The Polish theologian, historian and astronomer, Stanisław Lubieniecki (1623–1675) observed both comets from his house in Hamburg.

Source: The theatre of cosmic and human history

He corresponded with Ismäel Boulliau (1605–1694) in Paris and Henry Oldenburg (1618–1677), secretary of the Royal Society in London about the 1664 comet. In 1668 he published a three-part work on both comets, his Theatrum cometicum. Part one contained his correspondence on the topic with other European astronomers including Oldenburg, Hevelius and Athanasius Kircher (1602–1680), professor for mathematics and astronomy on the Jesuit University in Rome, including their observations. The first part also contained an impressive collection of copper plate prints of many historical comets.

The second part consisted of criticism by other scholars of his cometary theories and his answers to his critics, whilst the third part contained his astrological interpretations, including his opinion that the Great Fire of London was a punishment from God announced by the 1664 comet.

The French Jesuit, François-Joseph Le Mercier (1604–1690), reported observing the comet of 1664 for the first time in Québec on 29 November and continued observing it until 15 January 1665. He also observed the 1665 comet from 29 March until 17 April. In New England the Puritan minister and amateur astronomer Samuel Danforth (1626–1674) observed both comets. The author of three almanacs for the years 1647, 1648 and 1649, he wrote and published a book on the comets, which is considered one of the earliest printed astronomy publication in America.

By the 1660s there was no doubt amongst astronomers that comets were supralunar bodies and that they were real solid objects and not some sort of optical phenomena. This being the case the debate that raged throughout Europe concerned the flight path that comets were thought to take. One reference work consulted by most of the participants in this discussion was Johannes Kepler’s De cometis libelli tres I. astronomicus, theoremata continens de motu cometarum … II. physicus, continens physiologiam cometarum novam … III. astrologicus, de significationibus cometarum annorum 1607 et 1618 / autore Iohanne Keplero … (1609), which was regarded as an authoritative work on the subject. Of interest is that Kepler expressed the opinion that the flight paths of comets were rectilinear and explained than any apparent curvature observed in the flight path was due to the movement of the Earth, the observation platform. Others argued that the fight paths were curved and began to reference Kepler’s laws of planetary motion to support this position.  Sir William Lower (1570–1615), friend and student of Thomas Harriot, had already suggested in a letter 1610, having read Kepler’s Astronomia Nova (1609) and based on his and Harriot’s observation of Comet Halley in 1607 that the flight path was elliptical. 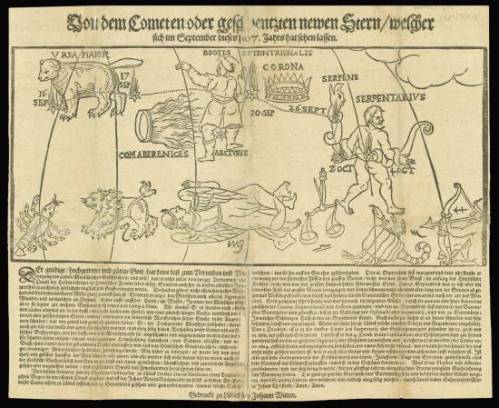 The discussion about the flight paths of comets in the 1660s can be regarded as a defining moment, together with Nikolaus Mercator’s reformulation of Kepler’s second law in 1664, for the acceptance of Kepler’s elliptical heliocentric model of the cosmos over its rival the Tychonic geo-heliocentric model. This of course didn’t happen overnight but 1664 can be regarded as the turning point in the battle of the systems.

In the 1660s opinions varied. Some, such as Christopher Wren (1632–1723) Savillian Professor of astronomy at Oxford, and John Wallis (1616–1703) Savillian Professor of geometry at Oxford, stuck to the traditional rectilinear flight paths, whilst others suggested various curved flight paths ranging from circles over parabolas to ellipses. Cassini had already, in a work about comets from the 1650s, following the Tychonic theory, committed to circular orbits a view he maintained based on his observations of the 1664 comet. Auzout in Paris voted for ellipses, as did Hevelius. Borelli criticised both Cassini and Auzout and suggested that the flight paths were parabolas.

Danforth’s account is interesting because it comes very close to being the current accepted view of comets. In his An Astronomical Description of the Late Comet or Blazing Star; As it appeared in New-England in the 9th, 10th, 11th, and in the beginning of the 12th Moneth, 1664. Together with a Brief Theological Application thereof (1665) he states that comets are supralunar bodies, that the bright tail was sunlight reflected off exhalations from the head of the comet and the tail always points away from the sun. He thought that its flight path was possibly an ellipse but in this case he was wrong. Modern calculations suggest that both the 1664 and 1665 are either extremely long period elliptical comets or had parabolic flight paths and were thus not periodic. Although the proof that some comets were, in fact, periodical still lay in the future some astronomers already speculated in the 1660s that this was the case. Robert Hooke, for example, thought the 1664 comet was a return of the 1618 great comet, whilst Cassini speculated that the comets of 1577, 1665 and 1680 were periodical.

In 1664, Isaac Newton (1642–1726 os) was still an undergraduate student at Cambridge University. Up till then an indifferent student in 1664 he had embarked on a six-year period of study in mathematics and natural philosophy that would lay the foundations for his life’s work. To record the results of his reading in natural philosophy he started a notebook that he had titled, Questiones quaedam Philosophicae. On 29 December 1664 and on the following day he made and entered observations of a comet. On 31 August 1726, in a conversation with John Conduitt (1688-1737) he mentioned his extended observations of this comet. Another Cambridge student, Nicholas Wickins, who shared chambers with Newton at that time, told Conduitt, “He sate up so often long in the year 1664 to observe a comet that appeared then.” This is probably Newton’s first activity as an astronomer. As we shall see, comets and their orbits would come to play an important roll in Newton’s future theory of universal gravitation and in his magnum opus, the Principia.

8 responses to “The emergence of modern astronomy – a complex mosaic: Part XXXVII”