The emergence of modern astronomy – a complex mosaic: Part XXV

One single occurrence in the year 1618 played a significant role in the history of astronomy, the appearance of a great comet. In fact there were three comets in 1618 but only one of them, a so-called great comet, made history. Great comets are those that are not just visible to astronomers but those that put on a spectacular display for the general public, the most well known being Comet Halley. The great comet of 1618 is important for the emergence of modern astronomy for three different reasons. 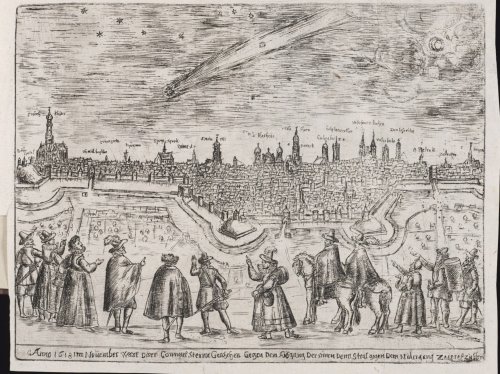 The first is that the Swiss, Jesuit Johann Baptist Cysat (c. 1587–1657), a student of Christoph Scheiner (1573–1650), who had assisted Scheiner with his sunspot observations, 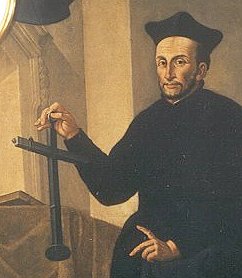 became the first astronomer to observe a comet with a telescope giving the first ever description of a comet’s nucleus in his Mathemata astronomica de loco, motu, magnitudine et causis cometae qui sub finem anni 1618 et initium anni 1619 in coelo fulsit. Ingolstadt Ex Typographeo Ederiano 1619 (Ingolstadt, 1619). He followed Tycho Brahe in believing that comets orbited the sun. He also demonstrated the orbit was parabolic not circular. 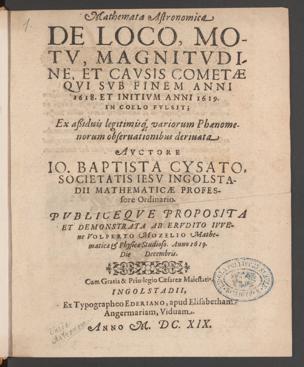 Johannes Kepler visited Cysat in Ingolstadt and the two astronomers corresponded, however only one of their letters is extant. Kepler, naturally, also observed the great comet of 1618 and wrote and published one of his, often overlooked but actually important books, on it and comets in general in 1619, his De cometis libelli tres I. astronomicus, theoremata continens de motu cometarum … II. physicus, continens physiologiam cometarum novam … III. astrologicus, de significationibus cometarum annorum 1607 et 1618 / autore Iohanne Keplero … 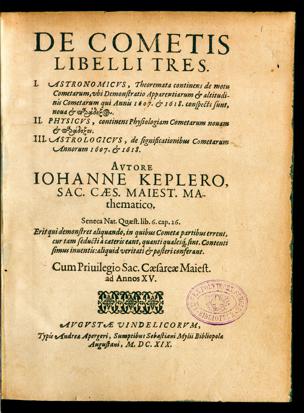 This is one of the most important publications on comets in the seventeenth century and became a standard reference work in the 1680s, when a very major and very important debate was launched by the appearance of several bright comets. Unlike Cysat, Kepler thought that the trajectory of comets was rectilinear and only appeared curved because of the movement of the earth, he of course being a supporter of heliocentricity whereas Cysat supported geo-heliocentricity.

Kepler’s view on the trajectory of comets is interesting because already in 1610, having read Astronomia Nova, Sir William Lower (1570-1615), English landowner, member of parliament, and student and friend of Thomas Harriot, who together with Harriot had made careful observations of Comet Halley in 1607, suggested that comets also follow an elliptical orbit. However, his very perceptive views on the topic remained largely unknown at the time. 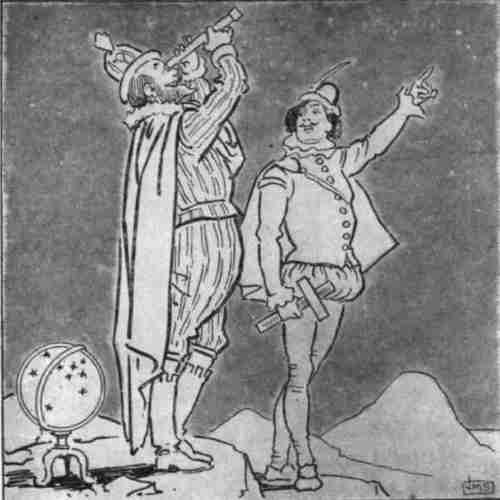 Cartoon of Sir William Lower with telescope John Prydderch his neighbour and observing companion with a Jacob staff Artist: The initials “JMS” appear in the corner of the cartoon. The front cover of the Journal of the Astronomical Society of Wales in the late 1890’s, also hand drawn, bore this insginia and stood for J. M. Staniforth, the artist-in-chief of the Western Mail newspaper

Another astronomer who made careful observations of all three of the 1618 comets was the Jesuit Orazio Grassi (1583–1654). 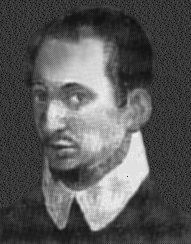 Grassi published his views, which he had expounded as a lecture at the Collegio Romano, the Jesuit university, as De Tribus Cometis Anni MDCXVIII also in 1619. 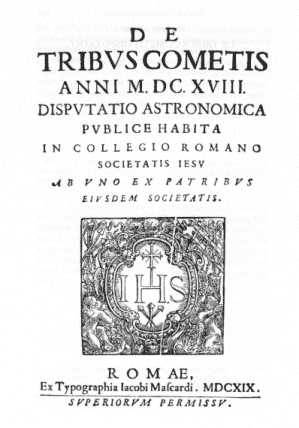 Like Cysat and Kepler he concluded that the comets were definitely supralunar and like Cysat, following Tycho, he concluded that they orbited the sun, like Tycho seeing this as a confirmation of the geo-heliocentric hypothesis. Grassi’s publication is notorious in the history of astronomy because it unintentionally launched one of the most infamous disputes in the history of astronomy, infamous because his opponent was none other than Galileo Galilei.

Galileo had not actually observed the comets of 1618 being confined to his bed by illness but was asked for his opinion on them by one of his fellow members of the Accademia dei Lincei, Virginio Cesarini (1595–1624). 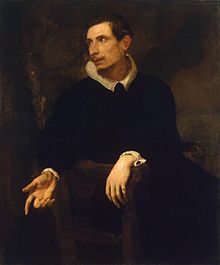 Galileo published his views, as a pernicious attack on Grassi’s De Tribus Cometis under the title Discorso delle Comete also in 1619 with a student of his, Mario Guiducci (1583–1646), as the named author, although it was an open secret that Galileo was the main author. Although Galileo always maintained that Guiducci and not he was the author, the manuscript that is still extant is largely in Galileo’s own hand and those paragraphs written by Guiducci have been corrected by Galileo. 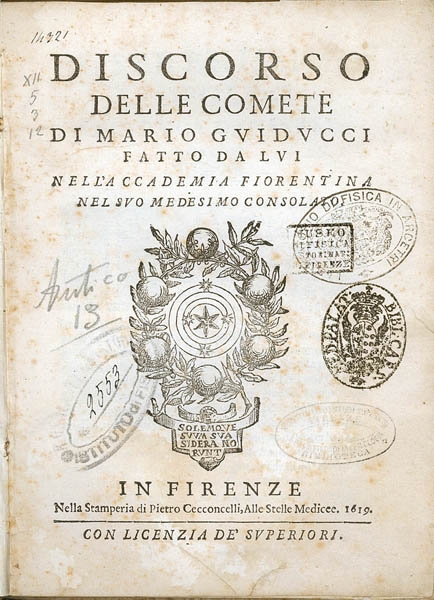 Surprisingly in Discorso delle Comete Galileo turns against the, in the meantime, general consensus amongst astronomers formed over the best part of one hundred years of comet observations that comets are supralunar celestial phenomena and argues instead, with Aristotle, that they are sublunar meteorological phenomena. He argued that the failure to determine parallax was not because comets were distant objects but because they were simply optical phenomena that like rainbows display no parallax. This theory, of course, directly contradicts the telescopic observations of the comet made by Cysat. Galileo might not of known of Cysat’s observations or he might simply have ignored them. It should be remembered that in all his writings on heliocentricity, Galileo totally ignored the writings of Kepler, although he was well aware of them. What Galileo is actually arguing against is the correct view expressed by both Cysat and Grassi that comets orbit the sun, as they use this to bolster a Tychonic geo-heliocentric model of the cosmos, which is unacceptable to Galileo. Galileo also took the opportunity in the Discorso to take another swing at Scheiner on the subject of sunspots.

Under the pseudonym Lotario Sarsi Sigensanso, an anagram of his Latin name (his original lecture had been published anonymously, as was usual for Jesuits), Grassi published an answer to the Galileo/Guiducci Discorso delle Comete, his Libra astronomica ac philosophica also in 1619. 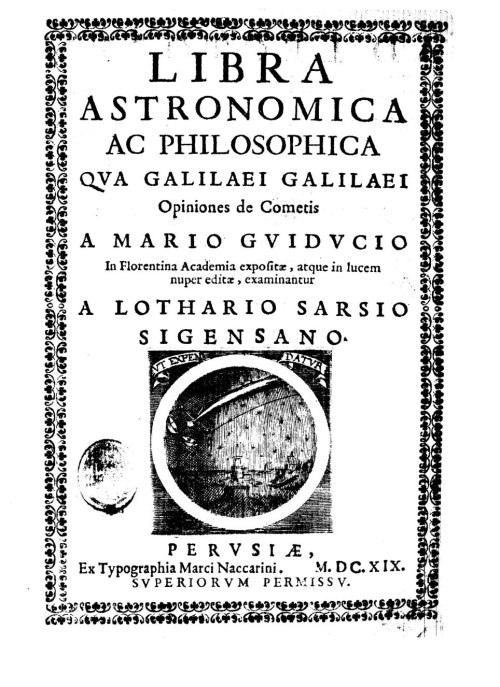 Here he presented scientific arguments and experimental tests to show that comets were definitely not optical phenomena. This of course further angered Galileo, who responded with one of his most famous publications Il Saggiatore, put out by the Accademia dei Lincei in 1623. Here we see a famous historical play on words. Grassi’s title Libra astronomica translates as The Astronomical Balance, i.e. weighing up the arguments, and Galileo’s answer Il Saggiatore translates as The Assayer. 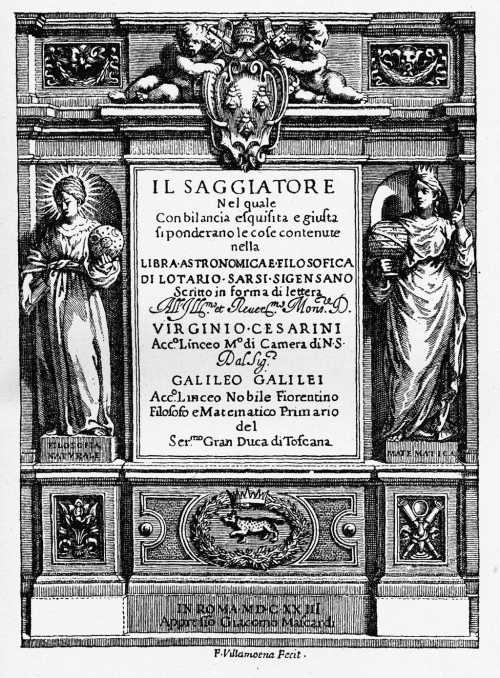 One general point that has to be made in this dispute is that although Grassi fought his corner energetically, even going so far as to suggest that some of Galileo’s arguments were theologically suspect, his tone was always correct and courteous. Opposed to this, Galileo was constantly aggressive, abusive and insulting not only towards Grassi but also towards all the others such as Tycho and Scheiner, who appeared in his polemical crosshairs. This continued, in fact was even amplified, in Il Saggiatore, where he took on all those he considered to be his intellectual adversaries. As well as viciously attacking Grassi he openly accused both Simon Marius and Christoph Scheiner of plagiarism, false accusations in both cases.

Il Saggiatore is famous for its ‘Two Books’ passage and Galileo’s statement that ‘the book of nature is written in the language of mathematics’. One should point out that Galileo actually wrote geometry not mathematics, as it is usually translated. The two books topos was not new with Galileo but goes back to the Middle Ages. People get all excited by the language of mathematics quote but by the time Galileo wrote it in 1623 it was a commonplace. Copernicus’ De revolutionibus has the statement, “Let no one untrained in geometry enter here.” Copernicus very definitely wanted to take the explanation of the cosmos away from the philosophers and give it to the mathematicians. This sentiment was certainly shared amongst others by Gerolamo Cardano (1501–1576), Niccolò Fontana Tartaglia (1499–157), Giambattista Benedetti (1530–1590), who anticipated much of Galileo’s work on the laws of fall, Tycho Brahe (1546–1601), Christen Longomontanus (1562–1647), John Dee (1527–1608), Thomas Digges (c. 1546–1595), Thomas Harriot (c. 1560–1621), Johannes Kepler (1571–1630), Simon Stevin (1548­–1620) as well as Christoph Clavius (1538–1612) and all the excellent Jesuit mathematical scholars who came out of his programme of mathematical education at the Collegio Romano. When Galileo coined his phrase in 1623 he was rather stating the obvious and not something spectacularly new. The so-called scientific revolution has been explicitly referred to as the mathematization of science, a process that was well underway before Galileo dropped his platitude into the debate. This was even acknowledged by some of the prominent opponents to this development such as the occultists Giordano Bruno (1548–1600) and Robert Fludd (1574–1637), who both explicitly rejected it.

The other point to note, which gets over looked by most people, is that Galileo’s statement was made in the specific dispute that I have just sketched above. In this dispute it was Grassi, who argued scientifically and mathematically, whereas Galileo didn’t.

One thing that Galileo could do better than any of his rivals was write and Il Saggiatore is a masterpiece of invective and polemic, leading people to oversee or ignore the fact that Galileo was actually in the wrong. The text was immensely popular, which led to two developments. Firstly, because of his attacks on Grassi and Scheiner he alienated the Jesuits the most mathematically competent scholars, not only in the Catholic Church but also in the whole of Europe. It should be remembered that it was the Jesuits at the Collegio Romano, who had provided the very necessary confirmation of all of Galileo’s telescopic discoveries and also celebrated him for them. He would no longer be able to rely on their support in the future. Secondly it found favour with Maffeo Barberini (1568–1644), who in 1623 was elected Pope Urban VIII. Barberini was an old friend and supporter of Galileo’s and a close associate of the Accademia dei Lincei, who celebrated his election and amongst other things presented him with a copy of Il Saggiatore, which he enjoyed immensely. He granted Galileo a couple of private audiences, an unusual honour for a mere mathematicus, and Galileo became a Papal favourite, something that would prove to be a two edged sword.

4 responses to “The emergence of modern astronomy – a complex mosaic: Part XXV”