It’s all a question of angles.

Thomas Paine (1736–1809) was an eighteenth-century political radical famous, or perhaps that should be infamous, for two political pamphlets, Common Sense (1776) and Rights of Man (1791) (he also wrote many others) and for being hounded out of England for his political views and taking part in both the French and American Revolutions.

So I was more than somewhat surprised when Michael Brooks, author of the excellent The Quantum Astrologer’s Handbook, posted the following excerpt from Paine’s The Age of Reason, praising trigonometry as the soul of science:

My first reaction to this beautiful quote was that he could be describing this blog, as the activities he names, astronomy, navigation, geometry, land surveying make up the core of the writings on here. This is not surprising as Ivor Grattan-Guinness in his single volume survey of the history of maths, The Rainbow of Mathematics: A History of the Mathematical Sciences, called the period from 1540 to 1660 (which is basically the second half of the European Renaissance) The Age of Trigonometry. This being the case I thought it might be time for a sketch of the history of trigonometry.

Trigonometry is the branch of mathematics that studies the relationships between the side lengths and the angles of triangles. Possibly the oldest trigonometrical function, although not regarded as part of the trigonometrical cannon till much later, was the tangent. The relationship between a gnomon (a fancy word for a stick stuck upright in the ground or anything similar) and the shadow it casts defines the angle of inclination of the sun in the heavens. This knowledge existed in all ancient cultures with a certain level of mathematical development and is reflected in the shadow box found on the reverse of many astrolabes. 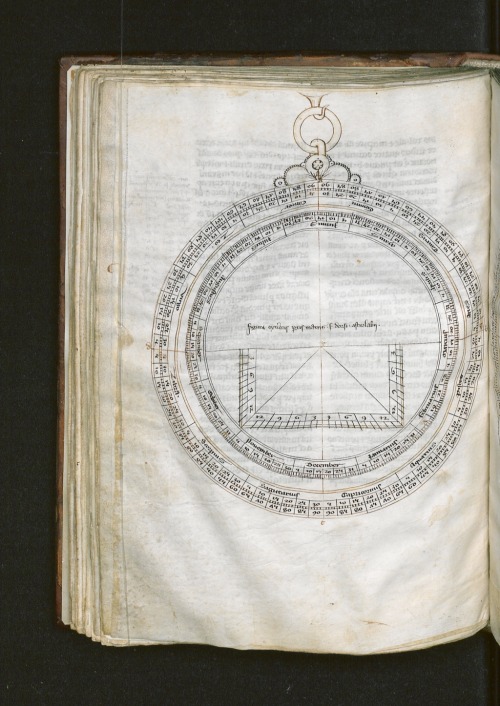 Shadow box in the middle of a drawing of the reverse of Astrolabium Masha’Allah Public Library Bruges [nl] Ms. 522. Basically the tangent and cotangent functions when combined with the alidade

Trigonometry as we know it begins with ancient Greek astronomers, in order to determine the relative distance between celestial objects. These distances were determined by the angle subtended between the two objects as observed from the earth. As the heavens were thought to be a sphere this was spherical trigonometry[1], as opposed to the trigonometry that we all learnt at school that is plane trigonometry. The earliest known trigonometrical tables were said to have been constructed by Hipparchus of Nicaea (c. 190–c. 120 BCE) and the angles were defined by chords of circles. Hipparchus’ table of chords no longer exist but those of Ptolemaeus (fl. 150 CE) in his Mathēmatikē Syntaxis (Almagest) still do.

The chord of an angle subtends the arc of the angle. Source: Wikimedia Commons

With Greek astronomy, trigonometry moved from Greece to India, where the Hindu mathematicians halved the Greek chords and thus created the sine and also defined the cosine. The first recoded uses of theses function can be found in the Surya Siddhanta (late 4th or early 5th century CE) an astronomical text and the Aryabhatiya of Aryabhata (476–550 CE).

Statue depicting Aryabhata on the grounds of IUCAA, Pune (although there is no historical record of his appearance). Source: Wikimedia Commons

Medieval Islam in its general acquisition of mathematical knowledge took over trigonometry from both Greek and Indian sources and it was here that trigonometry in the modern sense first took shape.  Muḥammad ibn Mūsā al-Khwārizmī (c. 780–c. 850), famous for having introduced algebra into Europe, produced accurate sine and cosine tables and the first table of tangents.

Statue of al-Khwarizmi in front of the Faculty of Mathematics of Amirkabir University of Technology in Tehran Source: Wikimedia Commons 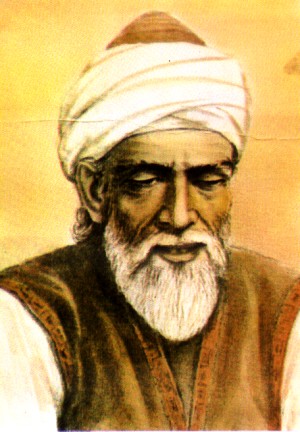 Trigonometry came into Europe along with astronomy and mathematics as part the translation movement during the 11th and 12th centuries. Levi ben Gershon (1288–1344), a French Jewish mathematician/astronomer produced a trigonometrical text On Sines, Chords and Arcs in 1342. Trigonometry first really took off in Renaissance Europe with the translation of Ptolemaeus’ Geōgraphikḕ Hyphḗgēsis (Geographia) into Latin by Jacopo d’Angelo (before 1360–c. 1410) in 1406, which triggered a renaissance in cartography and astronomy.

The so-called first Viennese School of Mathematics made substantial contributions to the development of trigonometry in the sixteenth century. John of Gmunden (c. 1380–1442) produced a Tractatus de sinibus, chodis et arcubus. His successor, Georg von Peuerbach (1423–1461), published an abridgement of Gmunden’s work, Tractatus super propositiones Ptolemaei de sinibus et chordis together with a sine table produced by his pupil Regiomontanus (1436–1476) in 1541. He also calculated a monumental table of sines. Regiomontanus produced the first complete European account of all six trigonometrical functions as a separate mathematical discipline with his De Triangulis omnimodis (On Triangles) in 1464. To what extent his work borrowed from Arabic sources is the subject of discussion. Although Regiomontanus set up the first scientific publishing house in Nürnberg in 1471 he died before he could print De Triangulis. It was first edited by Johannes Schöner (1477–1547) and printed and published by Johannes Petreius (1497–1550) in Nürnberg in 1533.

At the request of Cardinal Bessarion, Peuerbach began the Epitoma in Almagestum Ptolomei in 1461 but died before he could complete it. It was completed by Regiomontanus and is a condensed and modernised version of Ptolemaeus’ Almagest. Peuerbach and Regiomontanus replaced the table of chords with trigonometrical tables and modernised many of the proofs with trigonometry. The Epitoma was published in Venice in 1496 and became the standard textbook for Ptolemaic geocentric astronomy throughout Europe for the next hundred years, spreading knowledge of trigonometry and its uses.

In 1533 in the third edition of the Apian/Frisius Cosmographia, Gemma Frisius (1508–1555) published as an appendix the first account of triangulationin his Libellus de locorum describendum ratione. This laid the trigonometry-based methodology of both surveying and cartography, which still exists today. Even GPS is based on triangulation.

With the beginnings of deep-sea exploration in the fifteenth century first in Portugal and then in Spain the need for trigonometry in navigation started. Over the next centuries that need grew for determining latitude, for charting ships courses and for creating sea charts. This led to a rise in teaching trigonometry to seamen, as excellently described by Margaret Schotte in her Sailing School: Navigating Science and Skill, 1550–1800.

One of those students, who learnt their astronomy from the Epitoma was Nicolaus Copernicus (1473–1543). Modelled on the Almagest or more accurately the Epitoma, Copernicus’ De revolutionibus, published by Petreius in Nürnberg in 1543, also contained trigonometrical tables. WhenGeorg Joachim Rheticus (1514–1574) took Copernicus’ manuscript to Nürnberg to be printed, he also took the trigonometrical section home to Wittenberg, where he extended and improved it and published it under the title De lateribus et angulis triangulorum (On the Sides and Angles of Triangles) in 1542, a year before De revolutionibus was published. He would dedicate a large part of his future life to the science of trigonometry. In 1551 he published Canon doctrinae triangvlorvm in Leipzig. He then worked on what was intended to be the definitive work on trigonometry his Opus palatinum de triangulis, which he failed to finish before his death. It was completed by his student Valentin Otho (c. 1548–1603) and published in Neustadt an der Haardt in 1596. 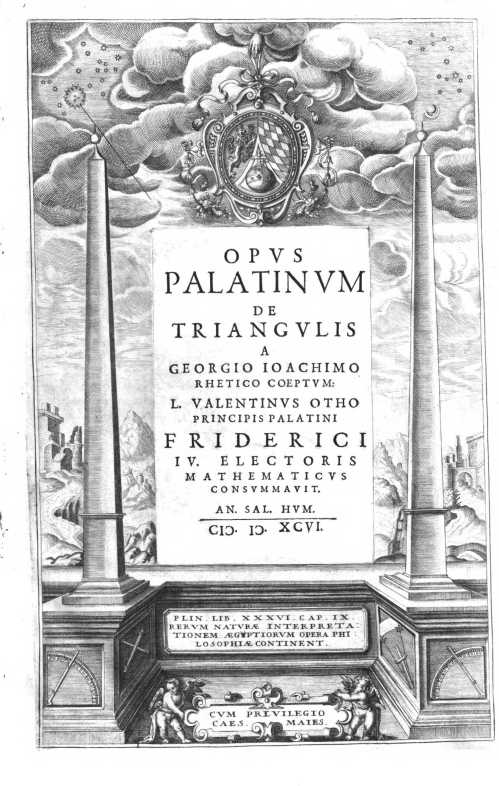 In the meantime Bartholomäus Pitiscus (1561–1613) had published his own extensive work on both spherical and plane trigonometry, which coined the term trigonometry, Trigonometria: sive de solutione triangulorum tractatus brevis et perspicuous in 1595.

This work was republished in expanded editions in 1600, 1608 and 1612. The tables contained in Pitiscus’ Trigonometria were calculated to five or six places, where as those of Rheticus were calculated up to more than twenty places for large angles and fifteenth for small ones. However, on inspection, despite the years of effort that Rheticus and Otho had invested in the work, some of the calculations were found to be defective. Pitiscus recalculated them and republished the work as Magnus canon doctrinae triangulorum in 1607. He published a second further improved version under the title Thesaurus mathematicus in 1613. These tables remained the definitive trigonometrical tables for three centuries only being replaced by Henri Andoyer’s tables in 1915–18.

We have come a long way from ancient Greece in the second century BCE to Germany at the turn of the seventeenth century CE by way of Early Medieval India and the Medieval Islamic Empire. During the seventeenth century the trigonometrical relationships, which I have up till now somewhat anachronistically referred to as functions became functions in the true meaning of the term and through analytical geometry received graphical presentations completely divorced from the triangle. However, I’m not going to follow these developments here. The above is merely a superficial sketch that does not cover the problems involved in actually calculating trigonometrical tables or the discovery and development of the various relationships between the trigonometrical functions such as the sine and cosine laws. For a detailed description of these developments from the beginnings up to Pitiscus I highly recommend Glen van Brummelen’s The Mathematics of the Heavens and the Earth: The Early History of Trigonometry, Princeton University Press, Princeton and Oxford, 2009.

6 responses to “It’s all a question of angles.”