John Dee, the ‘Mathematicall Praeface’ and the English School of Mathematics.

I have written about John Dee several times in the past but always in reaction to someone making stupid statements about him so I thought that today on his birthday, he was born 13  July 1527, I would write something positive without prior provocation.

The world into which Dee was born was one in which mathematics did not play a very significant role and this was particularly true of England, which in this sense lagged severely behind the continent. During the High Middle Ages the European universities virtually ignored mathematics although the introductory degree was theoretically based on the seven liberal arts including the quadrivium consisting of arithmetic, geometry, music (theory of proportions) and astronomy. These subjects were only treated in a very superficial manner and there were no dedicated chairs for the study of mathematics.

When Melanchthon took over responsibility for establishing the education system in the new Lutheran parts of Germany and Scandinavia, starting in 1525, he introduced chairs for mathematical studies in all the schools and universities to further his own interest in astrology. Filling the positions thus created with his own, often excellent, mathematical protégés. Although individual Catholic universities such as Vienna and Ingolstadt had chairs for mathematics, the Catholic education system as a whole had to wait until the last quarter of the sixteenth century before Christoph Clavius established a comprehensive system of mathematical studies at Catholic schools and universities similar to that established for the Lutheran ones by Melanchthon. Whilst this was all going on England slept.

At the beginning of the sixteenth century England was a mathematical desert. There were no dedicated chairs for mathematical studies at Oxford or Cambridge and mathematics was not taught at all in the schools. Whereas the city of Nürnberg in the first quarter of the century could boast a whole group of excellent instrument and globe makers selling their wares throughout Europe. Henry VIII’s court had only one, Nicolaus Kratzer, an import from Southern Germany, as was the man who painted his portrait, his friend, Hans Holbein. 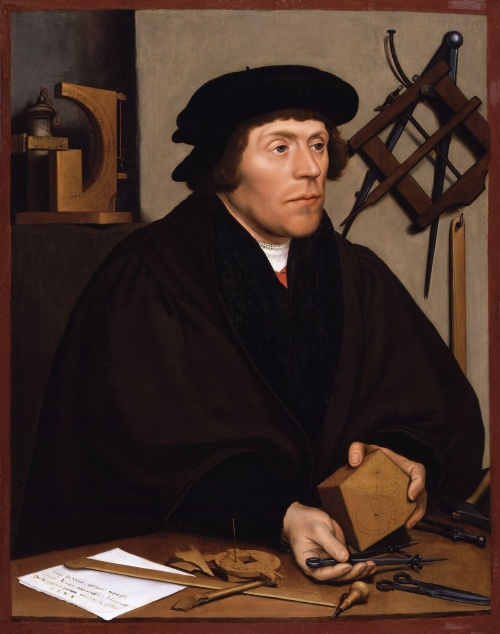 Unfortunately the upheavals of the reigns of Edward and Mary did nothing to improve this situation and it is first under Elizabeth that things began to improve but even here the first commercial instrument maker in London, Thomas Gemini, a pupil of Gemma Frisius, was an import from the Netherlands. There were some dedicated lectureships for basic mathematics at some of the Oxbridge colleges but nothing to compare with the continental provisions. Anybody who wanted a serious mathematical education had to go to the continents, as did, for example, Henry Savile, who established the Savilian Chairs for Geometry and Astronomy to Oxford in 1619, shortly before his death, the first university chairs for mathematical studies in England.

In the second half of the sixteenth century it became increasingly obvious that mathematics was becoming more and more important and as there was no initiative coming from either the Royal Court or the Oxbridge universities a group of mathematical scholars took things into their own hands and began to promote mathematical learning. This group has been dubbed by historians of mathematics the English School of Mathematics. It should be pointed out that this is not a school in any formal sense by rather an informal group of scholars spread over several generations who shared a common interest in promoting the mathematical sciences outside of the system, so to speak, and did so largely in the vernacular, the English referring to the language used rather than the nationality of those involved. This school in considered to have begun with Robert Recorde and John Dee and to have ended around the time of Isaac Newton’s rise to fame. Newton’s older contemporary John Wallis being considered a member.

The principle members of the initial group, Robert Recorde, Leonard Digges and John Dee, were all self-taught mathematicians, although Dee like Savile travelled and studied on the continent to deepen his mathematical knowledge. Dee studied under Frisius and Mercator in Leuven but also travelled extensively throughout Europe meeting and working with as well as learning from other leading continental mathematicians such as Federico Commandio in Italy.

Recorde set the ball rolling with a set of mathematical textbooks written in English covering introductory courses in arithmetic, geometry and astronomy. The last his Castle of Knowledge, published in 1556, even including a fairly positive reference to Copernican heliocentric astronomy.

Recorde died in 1558 and subsequent improved editions of his books were edited and published by Dee. Dee also brought up and taught mathematics to Leonard Digges’ son, Thomas, another prominent member of the School, following Leonard’s untimely demise. I will save a full history of the school for another post but wish to close with Dee’s “Mathematicall Praeface”.

One of the important early products of the English School was the first English translation of the Elements of Euclid. This translation was carried out by The Lord Mayor of London Sir Henry Billingsley and not from a Latin translation but direct from the Greek. Published in 1570 this mathematical milestone contained a preface as well as copious notes and supplementary material from John Dee and this preface is considered to be one of Dee’s most important mathematical works.

In this period where mathematics was still regarded with suspicion, disregard and even with some disdain by many of the educated it was common practice for authors of mathematical texts to preface their works with some form of justification for their efforts stressing the utility of their subject. Dee’s “Mathematicall Praeface” to the Billingsley Euclid is of this genre but it is an entirely different beast. Whereas the other mathematical authors might defend their products with a few well chose paragraphs or even a couple of pages on the usefulness of their exercises Dee’s work is a book length essay on the philosophy of mathematics.

In this work, which is a masterpiece of erudition, Dee sets out the whole range of the Renaissance mathematical sciences as Stephan Johnston an expert on the subject put it:

Dee enumerated and described an extraordinarily long list of arts, drawing on the riches of his library to present a digested treasury of Renaissance mathematics. Nor was Dee content with mere compilation; he sought to extend the mathematical pantheon, coining his own neologisms to identify topics and raise them to the status of independent arts. However, this intellectually imperialist expansion was not just an anarchic proliferation; in the ‘groundplat’ which diagrammatically summarised his discourse, Dee gave a powerfully graphic demonstration of the hierarchy and structure of the mathematical arts and their dependence on geometry and arithmetic as twin foundations[1].

[1] Stephen Johnston, The identity of the mathematical practitioners in 16th-century England.

[2] John Dee, The mathematicall praeface to the Elements of geometry of Euclid of Megara (1570), with introduction by Allen Debus, New York, History of Science Publications, 1975

24 responses to “John Dee, the ‘Mathematicall Praeface’ and the English School of Mathematics.”