Cosmographer to a Grand Duke and a Pope

Egnatio Danti is not a name that is known outside the circle of Renaissance historians of science. If you mention his name people often think you are talking about Dante the Italian medieval poet. Even Wikipedia asks, “Did you mean Dante?” when you type in his family name. But Egnatio Danti (1536-1586) an Italian friar, who was an artist, mathematician, astronomer and cartographer, was involved in several important mathematical projects in the sixteenth century.

Danti was born in Perugia in April 1536 into a family that basically predetermined his life and his career. His grandfather was Pier Vincenzo Rinaldi a goldsmith from profession and a poet, architect and astronomer by inclination. Nicknamed Dante by his friends he styled himself Dante de Rinaldi, which became shortened to Danti. Pier Vincenzo produced an Italian translation of Sacrobosco’s Sphere in the early 1490s the contents of which he passed on to his children, Teodora and Guilo along with his artistic talents. Teodora studied painting under Pietro Perugino, who also taught Raphael. She went on to become a successful artist in her own right. Guilo became an architect and the father of Vincenzo (born 1530) and Egnatio.

Egnatio learnt drawing from his father and mathematics from his aunt. His elder brother became a student of Michelangelo and went on to become a successful sculptor. In 1555, aged 19, having attended Perugia University Egnatio joined the Dominican order, where he continued his studies of mathematics, philosophy and theology. As a Dominican he was consistently conservative in his views: an Aristotelian in physics, a Ptolemaic astronomer and a Thomistic astrologer.

One of the Vasari’s projects was the Guardaroba Nuova a room conceived to house Cosimo’s chamber of curiosity or wunderkammer. 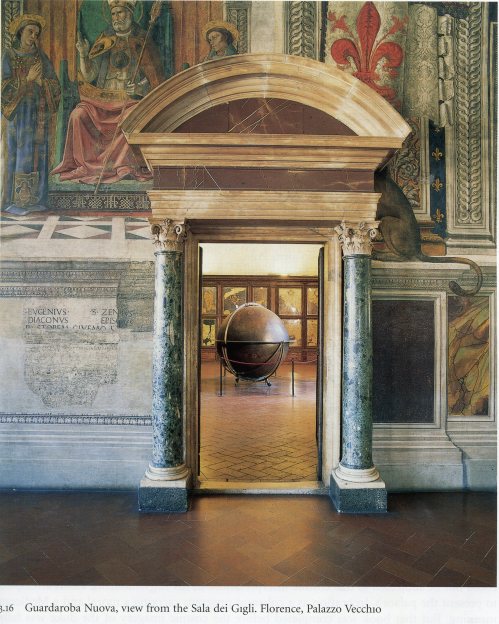 The room was furnished with carved walnut cabinets constructed by the master carpenter, Dionigi di Matteo Nigetti. The doors of the cabinets were to be decorated with mural maps depicting the whole world. When Vasari came to look for an artist-cartographer to complete this commission, Vincenzo Danti, who was also working in the Palazzo recommended his younger brother and Egnatio was hired.

Fifty-seven maps were commissioned, one for each cabinet door; Egnatio produced the cartoon for all of the maps but only painted thirty-one of them between 1563 and 1575; Stefano Bonsignori painted twenty-seven between 1577 and 1586. Egnatio also designed and constructed a large terrestrial globe that stands in the centre of the room.

A matching celestial globe that was planned to be lowered from the ceiling was never realised. The maps are ordered according to the principle of Ptolemaeus’ Geographia and the original concept was that each cabinet would house the treasures from that part of the world depicted by the map on its door.

As can be seen the maps are three dimensional pictorial maps but where possible the latitude and longitude for the picture location are accurate. 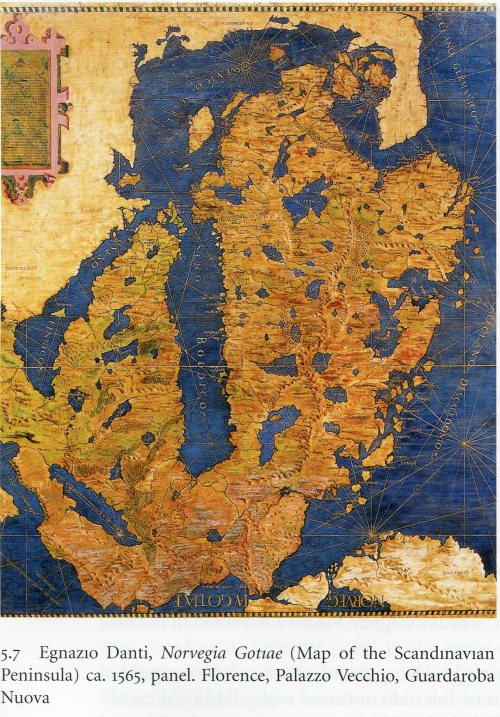 Source: Fiorani The Marvel of Maps p. 110 Note that the map is up side down!

Much pleased with his cartographical-artist  friar Cosimo appointed Danti ‘Cosmographer to the Grand Duke of Tuscany’ and assigned him a chair in mathematics at the university with minimal teaching obligations in 1571. Danti moved into the Palazzo, a move that did not please his superiors in the Dominican Order and began life as court cosmographer. He was required to teach cosmography–cartography, astronomy, and mathematics–to the Duke’s children, both male and female, and other assorted courtiers. A duty that he took very seriously writing and publishing a series of textbooks, many of them translations, in Italian for his pupils. A second requirement of his position was the creation and construction of mathematical and astronomical instruments for Cosimo. He also became the go-to instrument maker for the upper classes of Tuscany using the status of his position to bestow his favours in this area on carefully chosen customers for rather large sums; the money going to his order and not to him personally. 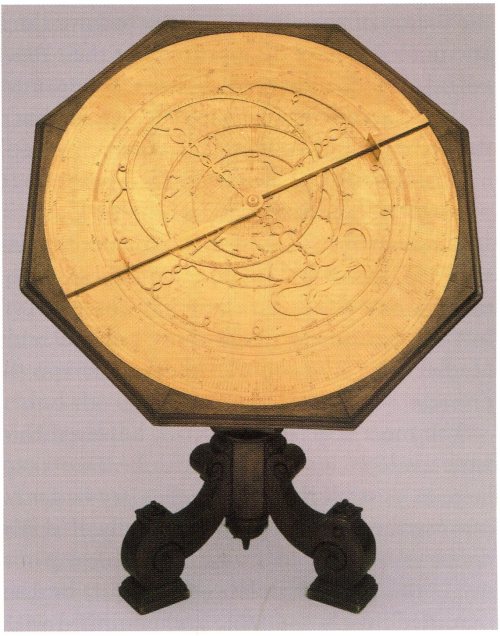 Many of Cosimo’s activities were intended to project his image as a great Renaissance Prince and to this end he offered his support and sponsorship to the Catholic Church in the question of the necessary calendar reform; in this role he saw himself as Caesar and Danti as his Sosigenes. Sosigenes of Alexander was the Greek astronomer, who, according to Pliny the Elder, was consulted by Julius Caesar on the design of the Julian calendar. To this end Cosimo sponsored the instillation of an armillary sphere and a quadrant on the façade of the Santa Maria Novella church in Florence by Danti in 1574 to better determine the length of the year, a necessary prerequisite for a calendar reform.

Along with the two instruments mounted on the façade of the church Danti drew up plans for and began the construction of a meridiana within the building. This is a straight line scale laid out on the floor of the building along which a beam of sunlight. projected through a hole high up in the wall, travels throughout the year, which can be used to exactly mark the times of the equinoxes. In Florence this project remained incomplete.

This exercise gained Danti the patronage of Cosimo’s son Cardinal Ferdinando de’ Medici for whom he procured an excellent Mercator astrolabe.

To help the Cardinal understand to workings of his fine gift, Danti wrote a treatise on the astrolabe dedicated to the Cardinal. However, even Ferdinando’s patronage could not avert the disaster looming on the horizon in Danti’s live. Already too ill to attend the inauguration of the armillary sphere at the vernal equinox on 11 March 1574, Cosimo died on 21 April in the same year to be succeeded by his eldest son Francesco I de’ Medici.

Francesco did not share his father’s interest in cosmography and appears to have had a personal antipathy towards the Dominican astronomer. Following pressure from Francesco, Danti was ordered by the Dominican General on 23 September 1575 to repair to a convent outside of Tuscany within 24 hours. This was just two weeks after the autumn equinox, suggesting that there had been an agreement to allow Danti to measure the equinoxes of 1575 before his banishment. Danti was sent to San Domenico in Bologna.

The civic authorities of Bologna were delighted to have a mathematicus of Danti’s rank in their city and immediately planned a second chair of mathematics for him at the local university. However, the Superior of the Dominican Order initially blocked the move, on the one hand disturbed by Danti’s increasing celebrity status and on the other wishing to retain his services as a teacher for their own monks. However the recently elected Pope, Gregory XIII, who was Bolognese, a great admirer of cartography and having himself been a professor at the university, supported the appointment. His illegitimate son Giacomo Boncompagni intervened on Danti’s behalf and he became professor for mathematics at the University of Bologna on 28 November 1576. 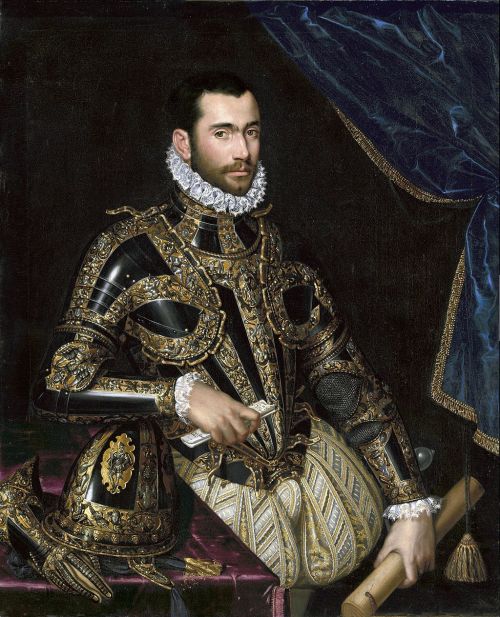 Here he taught courses in cosmography similar to those that he had taught in the de’ Medici palace in Florence. In Bologna Danti constructed a small meridiana in the Inquisition chamber of the San Domenico, which was too short to fulfil the desired function, so he constructed a full length one in the San Petronio Basilica. During his time in Bologna Danti continued to win influential patrons by the selective construction of high quality astronomical instruments as gifts. 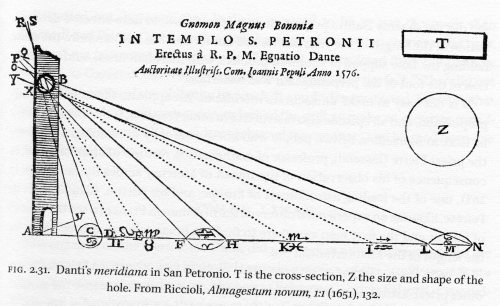 In 1577 he returned to his hometown of Perugia to attend to his brother Vincenzo, who was ailing. Whilst in the town he was commissioned by the town authorities to carry out a survey and cadaster (public register showing the details of ownership and value of land; made for the purpose of taxation) of Perugia, a task that he completed in a month making all of his measurements from horseback using a radio latino. 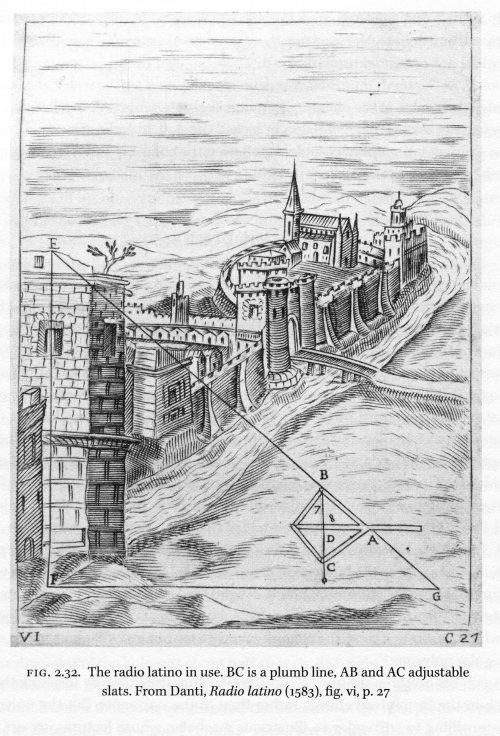 Danti presented the results of his labours in the form of a fifteen feet square mural map on the governor’s palace. 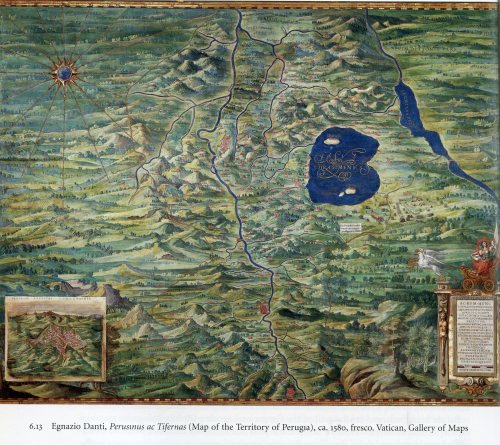 He also presented a copy of the map to the Pope’s illegitimate son Giacomo Boncompagni, who then commissioned him to carry out a similar survey of the Papal States supplying him with the necessary finances and manpower to complete the task. Once more he distinguished himself with the speed and quality with which he carried out the work.

Danti was now brought to the Vatican to work directly for Pope Gregory.

In 1579 he was commissioned to produce his second great gallery of maps along the walls of the recently constructed upper gallery on the east wing of the Belverdere. This time the theme was not the world, as in Florence, but the whole of Italy. At the top end of the gallery were two complete maps of Italy, Italia antiqua and Italia nova. 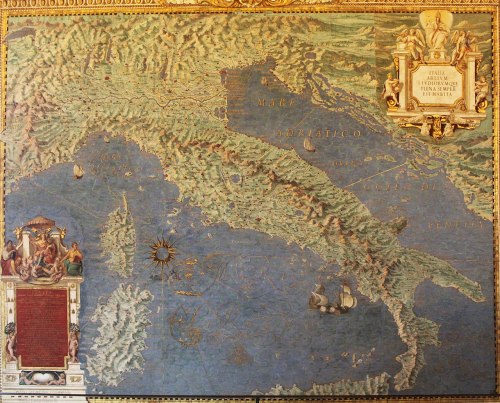 As one proceeded down the gallery the states on the east coast were presented on the left-hand west wall and those on the west coast on the right-hand east wall. This created the illusion of a walk along the Apennine ridge from Northern Italy to Sicily in the south. Danti planned and designed all of the maps but they were painted by a team of artists. The whole project took just two years to complete.

Each of the murals not only contains the map of its given district but also contains illustrations of significant historical happenings that took place there. 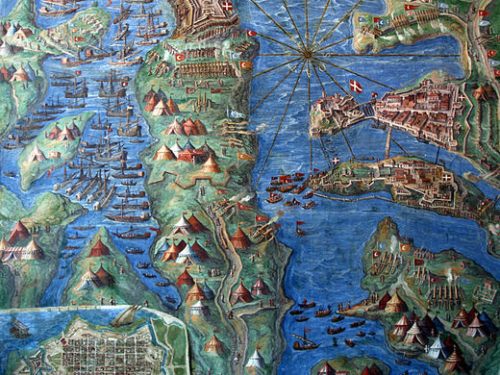 Fiorani (see below) says that this was the first ever atlas of Italy. Given that Italy as a country didn’t exist at this time but was an uneasy collection of independent states the project throws up some interesting questions as to Gregory’s intentions in commissioning it. Did he envisage a united Italy under his leadership?

In 1580 Danti was officially appointed Papal Cosmographer and at the same time appointed astronomical advisor to the Papal commission on calendar reform. His is one of the nine signatures on the final recommendations as presented to the Pope.

Whilst working in the Vatican Danti also created a new meridiana in the Tower of Winds.

On 14 November 1583 in recognition of his services Gregory appointed him Bishop of Altari. Gregory’s successor Pope Sixtus V summoned back to Rome in 1586 to assist in the re-erection of the Vatican Obelisk.

Re-erection of the Vatican Obelisk by the Renaissance architect Domenico Fontana in 1586 Source: Wikimedia Commons

Egnatio Danti died on 19 October 1586, today he is largely forgotten but, although often restored and modified over the centuries, Danti’s two great galleries of maps still exist as a monument to a great Italian Renaissance artist, cosmographer, mathematician, astronomer, instrument maker, textbook author and teacher.

This blog post is largely based on two excellent books: John Heilbron’s The Sun in the Church[1]a fascinating history of the construction of meridiana in the Early Modern Period and Francesca Fiorani’s The Marvel of Maps[2]a beautiful book on the Renaissance map galleries. Heilbron’s book is really a must read for anybody interested in the history of Early Modern astronomy and is available as a good value paperback. Fiorani’s book is one of the best books that I have read in recent years. It covers an extensive range of historical aspects of the central theme, all of them excellently researched and presented. The book is a real pleasure to read and the illustrations are first class. The only drawback is the price, weighing in at $150 on Amazon.com and more expensive elsewhere. I got lucky and picked up a ridiculously cheap second hand copy in perfect condition.

4 responses to “Cosmographer to a Grand Duke and a Pope”