Repeat after me! – They knew it was round, damn it!

Last week saw various reports about a rare stolen copy of a Columbus letter that had turned up in the Library of Congress and has now been restored to its Italian owners; a comparatively happy end to one of a series of recent stories about the theft of precious books and documents from archives and libraries. Unfortunately the report on the website of NPR (that’s National Public Radio a non-commercial public American educational radio network) opened with the following paragraph:

The heist of a major historical document apparently went undiscovered for more than 20 years. Now, a stolen letter from Christopher Columbus spreading the news that the world isn’t flat has been returned from the U.S. to Italy.

As some readers might already have guessed the second sentence, specifically the phrase spreading the news that the world isn’t flat, had me screaming and banging my head against the wall to relieve the pain. This is just horrendously wrong in several different ways. 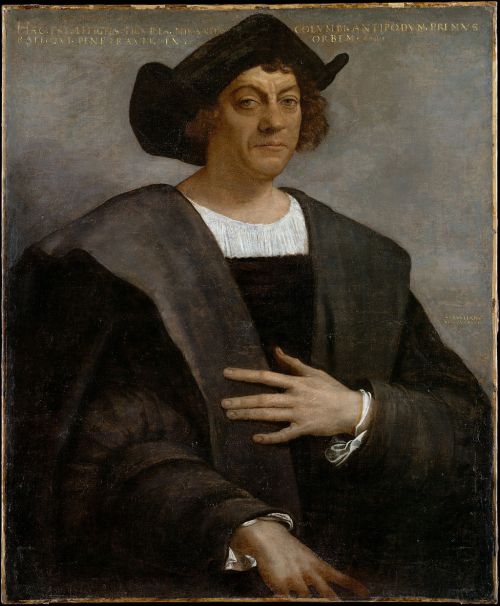 Posthumous portrait of Christopher Columbus by Sebastiano del Piombo, 1519. There are no known authentic portraits of Columbus.
Source: Wikimedia Commons

On his first voyage Columbus set sail from Spain in September 1492 and after approximately a month of sailing westward he landed on a set of previous unknown islands, unknown to the Europeans that is. This voyage proves or disproves absolutely nothing about the shape of the earth. To even contemplate a voyage proving the earth to be spherical and not flat we would have to fast forward thirty years to the return to Spain of the one ship and eighteen men from Ferdinand Magellan’s disastrous circumnavigation in 1522; just for the record Magellan was not one of the eighteen survivors, so to call him the first man to circumnavigate the world, as many people do, is simply false. Some flat-earthers could, and probably do/did, argue that Magellan’s fleet just sailed round in a circle on a flat disc and not around a spherical earth so even that is not a totally convincing proof (even if the objection is somewhat iffy).

Let us return to the good Cristoforo. One could argue that he set sail westward to reach the Spice Islands, instead of heading to the east, as was normal because he believed the earth to be a sphere and also believed that that sphere was small enough that the route west to the Spice Islands was shorter and thus quicker than the route east (A belief, as it turns out, that was based on faulty calculation, of which more later). Having reached what he erroneously believed to be the Spice Islands, leading to the equally erroneous name, the West Indies, he believed that he had proved the world to be spherical. There is however a fundamental flaw in this argument. Columbus did not sail westward because he believed the earth to be a sphere; he did so because he, like almost every other educated European, knew that it was a sphere, knowledge that had been part of the European cultural heritage for the best part of two thousand years.

This should in the meantime be well known, but for those, like the NPR reporter(s), who have been sitting at the back and not paying attention let us pass review over those two thousand years.

We have no direct records but latter authors tell us that the Pythagoreans in the sixth century BCE already accepted that the earth was spherical. Their reasons for doing so are unknown but it was possible in analogy to the celestial sphere of the so-called fixed stars. If you look up into the heavens on a clear dark night the sky appears to take the form of an inverted bowl or hemisphere. By the latest in the fourth century BCE, Aristotle, who would go on to have a massive influence on European intellectual history, knew that the earth was spherical and he offers up a series of empirical proofs for this claim. For example he wrote, “there are stars seen in Egypt and […] Cyprus which are not seen in the northerly regions.” Since this could only happen on a curved surface, he too believed Earth was a sphere “of no great size, for otherwise the effect of so slight a change of place would not be quickly apparent.” (De caelo, 298a2–10). He also pointed out that the shadow of the earth on the moon during a lunar eclipse is circular. Following Aristotle all Greek schools of philosophy accepted that the earth was spherical and following them the Romans. There was no doubt in the classical world that the earth was a sphere. Ptolemaeus, the most influential Greek astronomer, brought a series of arguments and proofs for the spherical form of the earth in his Syntaxis Mathematiké (Almagest) in the second century CE. Most notably that as ships approach over the horizon one sees the top of the mast before one sees the hull.

A lot of this specific knowledge got temporarily lost within Europe in the Early Middle Ages but still almost nobody who was educated doubted that the earth was a sphere. With the rise of the Islamic empire the astronomers writing in Arabic adopted the views of Aristotle and Ptolemaeus including the spherical form of the earth.

Back in the third century BCE the astronomer mathematician Eratosthenes from Alexandria determined the size of the sphere using the angle of the sun’s shadow and a bit of basic trigonometry. He achieved a fairly accurate result, its accuracy depends on which Stadia (an ancient measure of length) you think he used; we don’t know for certain. Other geographers and astronomers also determined the size of the earth’s sphere; all arriving at reasonable ball park figures. Ptolemaeus, in his Geōgraphikḕ (Geography) also determined that the known land area the oikoumenè, Europe, Africa and Asia, stretched over 180° of the earth’s surface from east to west.

In the High Middle Ages, Europe regained this knowledge, largely via the Islamic Empire through Spain and Sicily. The standard European university astronomy text Johannes de Sacrobosco’s De sphaera mundi, written in the twelfth century CE, contained all the standard Greek arguments for a spherical earth including the lunar eclipse shadow, ship breasting the horizon and the change in visible asterism travelling from south to north. There existed no doubt amongst the educated in the Middle Ages that the earth was a sphere.

Picture from a 1550 edition of De sphaera, showing the earth to be a sphere.
Source: Wikimedia Commons

When Columbus started making his plans at the end of the fifteenth century he knew that the world was a sphere, as did all of the people he tried to get to back his scheme. The only disputed point was how big the earth’s sphere was, how long the central landmass, Europe, Africa and Asia, was and thus how far the Spice Islands were if one sailed west from Europe. It was here that Columbus made some fundamental calculating errors. The Arabic astronomer al-Farghānī gave 562⁄3 Arabic miles (being 111.8 km) as the length of one degree of longitude, whereas Ptolemaeus gave 602⁄3 Roman miles (being 89.7 km). Columbus took al-Farghānī’s figure but multiplied it with the length of a Italian mile (much shorter than the Arabic one) to determine the circumference of the earth thus arriving at a figure that was far too small: approx. 25,255 km instead of al-Farghānī’s very accurate figure of 40,248 km. Ptolemaeus’ estimate of the spread of the main landmass was 180°, whereas it is in fact only about 130°. Columbus however took the even more inaccurate estimate of Marius from Tyre of 225°. The sum of these error meant that Columbus thought he only had about 3,700 km from the Canary Islands to Japan instead of the real 19,600 km! Having convinced his sponsors of the correctness of his calculations he set sail. If America had not been in the way Columbus and his entire crew would have  starved to death on the open ocean.

So where does the myth of the flat earth come from? There were a few European scholars in antiquity and the early Middle Ages who, against the evidence, still argued that the earth was flat. However none of them enjoyed much support. One of the ironies of history is that Copernicus probably drew attention to the most famous of them, the third century cleric Lucius Caecilius Firmianus Lactantius, by mentioning him in his De revolutionibus. The real myth of the medieval flat earth begins first in the eighteenth and nineteenth centuries and has two principal sources. Probably the most influential of these was the American author Washington Irving who in his fictional biography of Columbus claimed that Columbus had to fight against the Church’s belief that the world was flat in order to get permission and backing for his voyage, a complete fabrication. This falsehood was supported by the nineteenth centuries false interpretation of the medieval T and O Mappa Mundi. 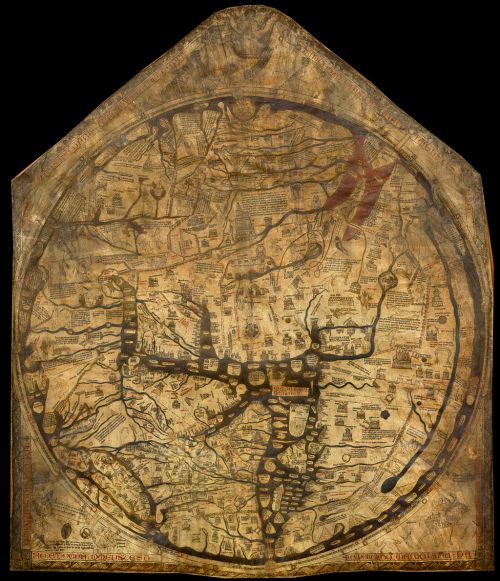 These medieval world maps were in the form of a circle, the O, with the three known continents, Europe, Africa and Asia, displayed in the form of a T with east at the top. These maps were interpreted in the nineteenth century as indicating that the medieval cartographers believed the earth to be a flat disc. This is not without irony as they were circular in order to indicate that the world in a sphere. The myth of the flat medieval world was taken up by two figures well known to readers of this blog John William Draper (1811–1882) and Andrew Dickson White (1832–1918) in their widespread myth of the eternal war between religion and science. Science believing in a spherical earth whereas the reactionary Church believed in a flat one.

That Europe in the Middle Ages believed in a flat earth is a total myth that just doesn’t seem to want to die. The next time somebody tells you that the medieval Church thought the world was flat, or that Columbus was a revolutionary for believing in a spherical earth or any other version of this nonsense, do me a favour, take a large, heavy, flat, round, metal object, such as a frying pan, and beat them around the head with it.

Filed under History of Astronomy, History of Cartography, Myths of Science