How papermaking crossed the Alps

Writing has been an important medium for recording and transmitting scientific results throughout history. In order to write you need two basic things, something to write with and something to write on. Carving words or symbols into wood or stone is one possibility that is both hard work and time consuming but does have the advantage that the finished product is highly durable especially if the material used is stone. You can actually also write with some sort of ink on sheets of wood. In fact the word ‘book’ comes from the German Buch, which in turn comes from Buche, which is the German for beech, both the tree and the wood. The ancient Babylonians wrote their Cuneiform script on clay tablets with a blunt reed stylus the result being wedge shaped symbols, the word cuneiform just coming from the Latin for wedge-shaped. The tablets baked when finished also have a relative high level of durability.

Enuma Anu Enlil text
This tablet talks about how the planet Venus will appear at certain times in the future.

Sometime in the fourth millennium BCE the ancient Egyptians invented a new material to write on, papyrus. These are mats made of the fibres of the papyrus plant. Unfortunately papyrus lacks flexibility and so can only be rolled and not folded making papyrus scrolls somewhat unwieldy in comparison to the later codex (that’s just Latin for book). Papyrus is also very susceptible to environmental influences, such as damp and excessive dryness, and is therefore not very durable. 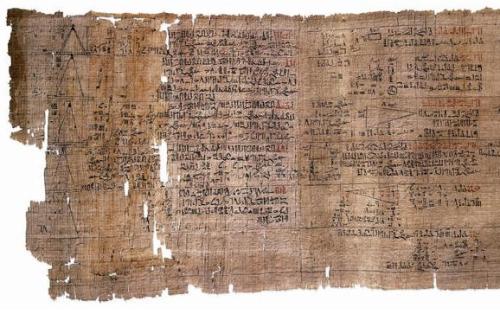 The history of parchment and vellum, that is prepared animal skins, which came to replace papyrus in antiquity especially in ancient Greece and Rome is shrouded in legend, myth and confusion but the method probably developed in ancient Egypt in the third millennium BCE. Pergamon in Greece became a major centre for the production of parchment and name of the material derives from the name of the city. Vellum is parchment made from calfskin, which is finer than that of other animals and the name derives from the Latin for calf. Parchment and vellum are difficult and expensive to produce, which amongst other things led to the habit of scraping the writing off of old documents to reuse the material thus producing so-called palimpsests a word derived from the Greek for scraped again, skins being scraped to produce parchment in the first place. If stored properly parchment is considerably less susceptible to environmental influences than papyrus and thus more durable. 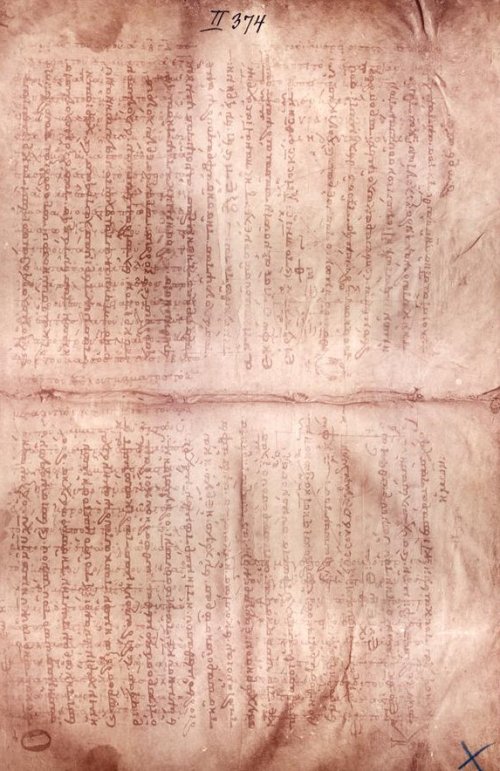 A typical page from the Archimedes Palimpsest. The text of the prayer book is seen from top to bottom, the original Archimedes manuscript is seen as fainter text below it running from left to right

In order to mass produce writing on a large scale cheaply it is obvious that a new writing material would have to be invented and that material was paper. Paper, which like papyrus is mats of plant fibre, was invented in China, sometime between the third century BCE and the second century CE, came to Europe like many things via the Islamic Empire. Paper is traditionally made of the fibres of flax or hemp, wood pulp paper is largely a product of the industrial nineteenth century, is lighter and much more flexible than papyrus. Originally it was regarded sceptically in Europe because compared to parchment it lacked durability making it, in the opinion of its critics unsuitable for important documents. However, with the invention of moveable type printing and the possibility of producing multiple copies of documents cheaply and quickly paper came into its own. But I run ahead of myself.

According to legend the Arabs discovered the secret of paper making from Chinese prisoners captured at the Battle of Telas in 751 CE. Although probably not true paper mills began to spread fairly rapidly throughout the Islamic Empire in the eighth century CE. The Arabs developed the techniques of mass paper production and introduced the first paper mills into Europe in Spain in the late eleventh century CE. From here papermaking spread to Southern France and Italy by the thirteenth century. Northern Europe relied on expensive imports to supply their paper needs. The first paper mill north of the Alps was set up by Ulman Stormer on the river Pegnitz just outside of Nürnberg in 1390 CE.

Ulman Stromer was born 6 January 1329 the twelfth of eighteen surviving children of the Nürnberger merchant Heinrich Stromer and his second wife Margarete Geusmid. He was apprenticed as a merchant and learnt his trade in Barcelona, Genoa, Madrid and Kraków. In 1370 he took over, together with two of his brothers, the management of the family’s Europe wide trading company. He also served as a local politician in Nürnberg. Stromer a shrewd trader realising the profits being made by the Northern Italian papermakers decide to set up in competition in his own home territory. According to Stromer’s own written account he set up his paper mill on 24 June (St John’s Day) 1390:

“IN the name of Christ, amen. Anno Domini 1390, I, Ulman Stromer, started at making paper on St. John’s day at the Solstice, and began to set up a wheel in the Gleissmühle, and Clos Obsser was the first who came to work.”

There being no papermakers in Germany Stromer brought in the brothers Marco and Francisco di Marchia and their boy Bartolomeo from Italy to set up and run the mill, which became known as the Hadermühle Hadern being Lumpen or in English rags, paper being made not directly from flax plants but from linen rags. 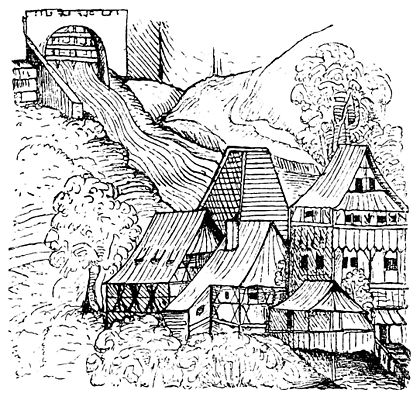 Stromer’s paper mill has been recorded for posterity in one of the most famous early books also printed in Nürnberg, the Die Schedelsche Weltchronik better known in English as the Nuremberg Chronicle.

Stromer’s paper mill in the Nuremberg Chronicle of 1493. The building complex is at the lower right corner, outside the city perimeter.
Source: Wikipedia Commons

11 responses to “How papermaking crossed the Alps”