Only 26 and already a professor!

In 1669 Isaac Newton, who was born on 25th December 1642 (OS)[1], was elected Lucasian Professor of Mathematics at Cambridge University at the tender age of 26 in 1669. This fact has led and in fact continues to lead to a series of historical myths and misunderstandings that I intend to address in this brief post in celebration of Isaac’s birthday. 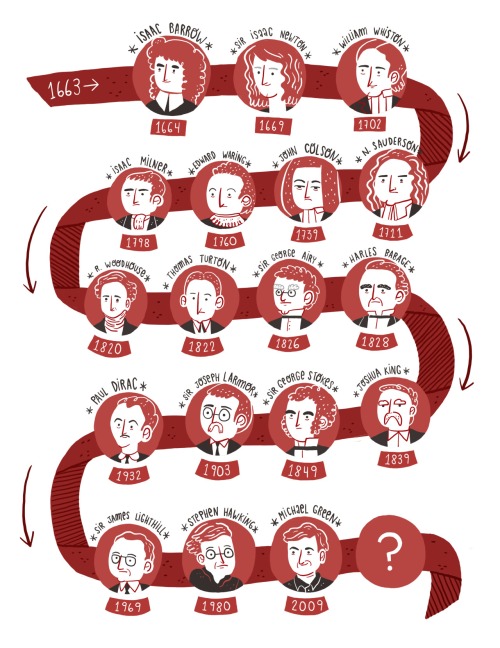 When talking of Newton’s status in his world people often refer to his having been Lucasian Professor at Trinity College, Cambridge and you can almost hear them mentally putting the words in scare quotes or writing them in block capitals out of respect for their high status. I mean Lucasian Professor, the last one was that super brilliant guy in the wheel chair who discovered black holes or something and the new one is that Green chappy who invented that string theory that nobody understands but is so terribly clever. Going back in time we have Dirac and Stokes and Babbage and Airy all super intelligent nerds who discovered important things and had things named after them. It is claimed that the Lucasian is the most prestigious chair for mathematics in the world. Then there is Trinity College. Bertrand Russell, Jawaharlal Nehru, Lord Byron, Ernest Rutherford, Sir Francis Bacon, Alfred Tennyson and many, many more makers and shakers were all Trinity men and the college has produced more Nobel laureates than the whole country of France. Cambridge of course is one of the world’s elite institutions of education part of an exclusive club of the best of the best. So Newton was Lucasian Professor at Trinity College Cambridge at the age of 26, wow! I mean double, triple or even quadruple wow! He must have been something very, very special.

This sentiment is of course a very bad case of historical presentism that is measuring things in the past according to the values and norms of the present instead of according to those that ruled in the period under discussion. Let us re-examine the phrase Lucasian Professor of Mathematics at Trinity College Cambridge in the light of what it meant in the last quarter of the seventeenth century. We will deal with the ‘aged 26’ later.

In the late seventeenth century Cambridge University’s status was very much on the ebb. It was an educational backwater on the university map of Europe. Wealthy English parents who wanted the best for their offspring would send them to universities abroad in Holland, Germany of Italy or even to Scotland rather then to trust them to the care of the Cambridge dons. If there had been university league tables in 1669 Cambridge would very definitely not have featured in the top ten and probably not even in the top twenty. First presentist illusion popped.

Regarding Trinity College I first have to explain a little bit about the Oxford and Cambridge college system and their fellowships. The Oxford and Cambridge colleges are autonomous private institutions and often very wealthy, their funds being in the form of endowments from founders and ex-fellows. These colleges are run by their fellows who are, so to speak, the shareholders of the college. Fellows are scholars who are elected by the other fellows and who receive free board and lodging as well as a grant in order to enable them to freely indulge in academic research. The head of the body of fellows of a college is the master of the college. A college can so to speak be judged on the quality of its fellows. Richard Bentley was elected Master of Trinity in 1700, two years before Newton resigned the Lucasian Professorship. Bentley was an intellectual giant on a level with Newton. A child prodigy he went on to do for the discipline of philology what Newton had done for the discipline of physics. He also edited the second edition of Newton’s Principia Mathematica in 1712. Bentley was an irascible man known for his plain speaking, a fact that won him few friends and many enemies. When he became Master of Trinity he described the current body of fellows as a pack of lazy, good for nothing drunken fools, not exactly the image of Trinity that most people have today. Second presentist illusion popped.

We now turn to the Lucasian Chair itself; surely here we can find some hint of excellence. In the early modern period England lagged way behind the rest of Europe in the question of mathematical education. In the mediaeval university, and to all intents and purposes Cambridge was still in essence a mediaeval university in the seventeenth century, mathematics had only served a very subservient role. It was not considered an important subject and was very much neglected. Mediaeval students leaving the university had a best only a very rudimentary knowledge of the mathematical syllabus, the so-called quadrivium i.e. arithmetic, geometry, music and astronomy. This began to change slowly in the fifteenth century with the rise of interest in astrology and astrological medicine. In order to study astrology one needs to understand astronomy, which in turn presupposes knowledge of arithmetic and geometry. To fill this need the humanist universities of Northern Italy and Cracow in Poland introduced dedicated chairs for the study of the mathematical sciences, principally astrology. Early in the sixteenth century the Protestant universities of Germany and Scandinavia under the guidance of Phillip Melanchthon followed suit. The Catholic universities of Europe finally caught up at the end of the sixteenth century thanks to Christoph Clavius. Only England remained devoid of specialist mathematicians. In the sixteenth century mathematical instrument makers such as Nicolas Kratzer or Thomas Gemini had to be imported from the continent and those Englishmen who wished to become mathematicians were either largely self taught or like John Dee or Henry Savile travelled on the continent to gather their mathematical knowledge. To at least try to improve this situation Thomas Gresham created chairs for geometry and astronomy when he set up Gresham College in London at the end of the sixteenth century. Gresham College whilst offering public lecture in both English and Latin was not a university. Finally in about 1620 Henry Savile set chairs for geometry and astronomy at Oxford, the first dedicated chairs for mathematics at an English university. It would be another forty years before Cambridge joined the club and Henry Lucas set up the chair named after him in 1663. However having a chair for mathematics does not mean that students automatically interest themselves for the discipline. In Cambridge things went on very much as before and almost no one took any notice of the lectures of the chair’s first incumbent Isaac Barrow. To clear another couple of myths out of the way there is absolutely no evidence that Newton was a student of Barrow’s and it would appear that they first became acquainted after Newton had been granted his MA and become a fellow of Trinity of which Barrow would later become master. However Newton did then become a protégée of Barrow’s who did everything in his power to help the budding genius. It is also not true that Barrow, recognising Newton’s superiority as a mathematician, resigned the Lucasian Chair in favour of the younger man. Although to be fair this myth was set in the world by Newton himself. Barrow realised that a chair for mathematics carried absolutely no social or academic status at that time and resigned to devote himself to divinity leading to his appointment as King’s Chaplin a couple of years later. He did however champion Newton’s cause and assist him to become elected to the now vacant Lucasian Chair. Did things improve under Newton? They did not. Very few students, and some times none at all, attended Newton’s lectures and not one single student dedicated himself to the study of mathematics under Newton in the thirty years that he occupied the chair. Status of the Lucasian Chair during Newton’s incumbency nil, third illusion popped.

We now turn to the seemingly young age at which Newton became professor again an examination of the real historical situation reveals this to be the norm rather than the exception. I have already pointed out the Cambridge was to all intents an purposes a mediaeval university and it is to these institutions that we now turn to examine their process of appointing teaching staff. Medieval universities were in the literal sense liberal arts colleges. Students studying at the university first entered the liberal arts faculty where they studied the seven liberal arts, the trivium (logic, rhetoric and grammar) and the quadrivium. As already mentioned above in reality the quadrivium was largely neglected and the students were taught the trivium on the basis of the works of Aristotle. Students closed this first set of studies with a BA where upon most of them left the university. Those that stayed proceeded to their MA with more of the same. Passing the MA exam entitled the student to two things. Firstly he could proceed to one of the higher faculties and study for a doctorate in law, medicine or theology. Secondly he was now qualified to teach; the courses in the liberal arts faculty were namely taught by freshly baked MAs. Who taught what was decided by drawing lots with the courses of the quadrivium being regarded as having drawn the short straw. It was common practice for courses to be allotted directly to especially favoured students. With time individual courses were fitted out with endowments in order to be able to pay an especially talented magister to be paid to teach it. This process is the beginning of the professorial chair system. As normal students entered university at the age of fourteen the masters who did the teaching were usually in their early twenties. As soon as they had passed their doctoral exams they moved on to other things leaving the teaching to the next generations of new masters. When the first endowments for chairs in mathematics began to emerge the procedure didn’t change much with young freshly qualified MAs being appointed to fill them. As the chairs for mathematics were the worst paid on the universities, it was not possible to take a doctorate in mathematics and mathematics had a very, very low academic and social status it was very common for the young occupants of the chairs for mathematics to move on to something better as soon as possible. Thus the professors of mathematics on the universities in the early modern period tended to be young. There were of course exception such as Peter Apian or Michael Maestlin but it was more general for professor of mathematics to move on to better things, as did Barrow. Newton’s appointment as mathematics professor at the age of 26 was before the eighteenth century really not unusual at all. What was unusual is that he stayed put for almost thirty years before moving on to become Warden of the Mint because of the higher social status the position carried.

[1] For those not in the know about standard historical abbreviations OS means old style and refers to a date on the Julian calendar that is before the calendar reform and the change to the Georgian calendar. As Newton perceived himself as having been born on Christmas day and celebrated his birthday more than eighty times on this day I refuse to indulge in the perverse habit of proclaiming that he was born on 4th January.

19 responses to “Only 26 and already a professor!”