In a recent post on John Wallis I commented on seventeenth century English mathematicians who have been largely lost to history, obscured by the vast shadow cast by Isaac Newton. One person, who has suffered this fate, possibly more than any other, was the first Lucasian Professor of Mathematics at Cambridge, and thus Newton’s predecessor on that chair, Isaac Barrow (1630 – 1677), who in popular history has been reduced to a mere footnote in the Newton mythology. 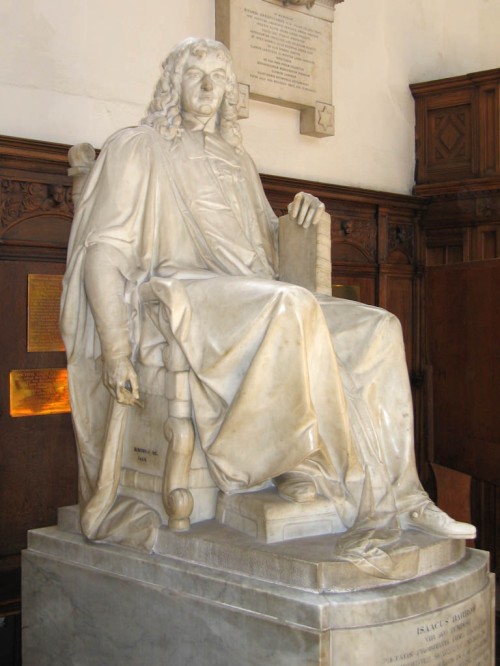 Statue of Isaac Barrow in the Chapel of Trinity College

He was born in London in 1630 the son of John Barrow a draper. The Barrow’s were a Cambridge family notable for its many prominent scholars and theologians. Isaac father was the exception in that he had gone into trade but he was keen that his son should follow the family tradition and become a scholar.  With this aim in view the young Isaac was originally sent to Charterhouse School where he unfortunately more renowned as the school ruffian than for his learning. His father thus placed him in Felsted School in Essex, where John Wallis was also prepared for university, and where he soon turned his hand to more scholarly pursuits. Barrow’s success at school can be judged by the fact that when his father got into financial difficulties, and could no longer pay his school fees, the headmaster of the school took him out of the boarding house and lodged him in his own private dwelling free of charge and also arranged for him to earn money as tutor to William Fairfax.

In 1643 he was due to go up to Peterhouse Cambridge, where his uncle Isaac was a fellow. However his uncle was ejected from the college by the puritans and so the plan came to nought. Cut loose in society young Barrow ended up in Norfolk at the house of Edward Walpole a former schoolfellow who on going up to Cambridge decided to take Barrow with him and pay his keep. So it was that Barrow was admitted to Trinity College in 1646. Following further trials and tribulations he graduated BA in 1649 and was elected fellow shortly after. He went on to graduate MA in 1652 displaying thereby a mastery of the new philosophy. Barrow’s scholarly success was all the more remarkable, as throughout his studies he remained an outspoken Anglican High Church man and a devout royalist, things not likely to endear him to his puritan tutors.

In the 1650s Barrow devoted much of his time and efforts to the study of mathematics and the natural sciences together with a group of young scholars dedicated to these pursuits that included John Ray and Ray’s future patron Francis Willughby who had both shared the same Trinity tutor as Barrow, James Duport. Barrow embraced the mathematical and natural science of Descartes, whilst rejecting his metaphysics, as leading to atheism. He also believed students should continue to study Aristotle and the other ancients for the refinement of their language.  During this period Barrow began to study medicine, a common choice for those interested in the natural sciences, but remembering a promise made to himself whilst still at school to devote his life to the study of divinity he dropped his medical studies.

It was during this period that Barrow produced his first mathematical studies producing epitomes of both Euclid’s Elements and his Data, as well as of the known works of Archimedes, the first four books of Apollonius’ Conics and The Sphaerics of Theodosius. Barrow used the compact symbolism of William Oughtred to produce the abridged editions of these classical works of Greek mathematics. His Elements was published in 1656 and then again together with the Data in 1657. The other works were first published in the 1670s.

In 1654 a new wave of puritanism hit the English university and to avoid conflict Barrow applied for and obtained a travel scholarship leaving Cambridge in the direction of Paris in 1655. He spent eight months in Paris, which he described as, “devoid of its former renown and inferior to Cambridge!” From Paris he travelled to Florence where he was forced to extend his stay because an outbreak of the plague prevented him continuing on to Rome. In November 1656 he embarked on a ship to Smyrna, which on route was attacked by Barbary pirates, Barrow joining the crew in defending the ship acquitted himself honourably. He stayed in Smyrna for seven months before continuing to Constantinople. Although a skilled linguist fluent in eight languages Barrow made no attempt to learn Arabic, probably because of his religious prejudices against Islam, instead deepening his knowledge of Greek in order to study the church fathers.  Barrow left Constantinople in December 1658 arriving back in Cambridge, via Venice, Germany and the Netherlands, in September 1659.  It should be noted that the Interregnum was over and the Restoration of the monarchy would take place in the very near future. Unfortunately all of Barrow’s possessions including his paper from his travels were lost on the return journey, as his ship went up in flames shortly after docking in Venice

Barrow’s career, strongly supported by John Wilkins, now took off. In 1660 he was appointed Regius Professor of Greek at Cambridge followed in 1662 by his appointment as Gresham Professor of Geometry at Gresham College in London. His Gresham lectures were unfortunately lost without being published so we know little of what he taught there.  On the creation of the Lucasian Chair for Mathematics in 1663 Barrow was, at the suggestion of Wilkins, appointed as it first occupant. In 1664 he resigned both the Regius and the Gresham professorships. Meanwhile Barrow had started on the divinity trail being granted a BD in 1661 and beginning his career as a preacher.

Barrow only retained the Lucasian Chair for six years and in this time he lectured on mathematics, geometry and optics. His attitude to mathematics was strange and rather unique at the time. He was immensely knowledgeable of the new analytical mathematics possessing and having studied intently the works of Galileo, Cavalieri, Oughtred, Fermat, Descartes and many others however he did not follow them in reducing mathematics to algebra and analysis but went in the opposite directions reducing arithmetic to geometry and rejecting algebra completely. As a result his mathematical work was at one and the same time totally modern and up to date in its content whilst being totally old fashioned in its execution. Whereas his earlier Euclid remained a popular university textbook well into the eighteenth century his mathematical work as Lucasian professor fell by the wayside superseded by those who developed the new analysis. His optics lectures were a different matter. Although they were the last to be held they were the first to be published after he resigned the Lucasian chair. Pushed by that irrepressible mathematics communicator, John Collins, to publish his Lucasian Lectures Barrow prepared his optics lectures for publication assisted by his successor as Lucasian Professor, Isaac Newton, who was at the time delivering his own optics lectures, and who proof read and corrected the older Isaac’s manuscript. Building on the work of Kepler, Scheiner and Descartes Barrow’s Optics Lectures is the first work to deal mathematically with the position of the image in geometrical optics and as such remained highly influential well into the next century.

As he had once given up the study of medicine in his youth Barrow resigned the Lucasian Professorship in 1669 to devote his life to the study of divinity. His supporters, who now included an impressive list of influential bishops, were prepared to have him appointed to a bishopric but Barrow was a Cambridge man through and through and did not want to leave the college life. To solve the problem his friends had him appointed Master of Trinity instead, an appointment he retained until his tragically early death in 1677, just forty-seven years old. Following his death his collected sermons were published and it is they, rather than his mathematical work, that remain his intellectual legacy. Throughout his life all who came into contact with him acknowledge Barrow as a great scholar.

Near the beginning of this post I described Barrow as, having “been reduced to a mere footnote in the Newton mythology”. What did I mean by this statement and what exactly was the connection between the two Isaacs, apart from Barrow’s Optics Lectures? Older biographies of Newton and unfortunately much modern popular work state that Barrow was Newton’s teacher at Cambridge and that the older Isaac in realising the younger Isaac’s vast superiority as a mathematician resigned the Lucasian Chair in his favour. Both statements are myths. We don’t actually know who Newton’s tutor was but we can say with certainty that it was not Barrow. As far as can be ascertained the older Isaac first became aware of his younger colleague after Newton had graduated MA and been elected a fellow of Trinity. The two mathematicians enjoyed cordial relations with the older doing his best to support and further the career of the younger. As we have already seen above Barrow resigned the Lucasian Professorship in order to devote his live to the study and practice of divinity, however he did recommend his young colleague as his successor and Newton was duly elected to the post in 1669. Barrow also actively helped Newton in obtaining a special dispensation from King Charles, whose royal chaplain he had become, permitting him not to have to be ordained in order to hold the post of Lucasian Professor[2].

[1] On Monday I wrote that I might not be blogging for a while following Sascha untimely death. However I spent some time and effort preparing this years usual Christmas Trilogy of post and I find that writing helps to divert my attention from thoughts of him and to stop me staring at the wall. Also it’s what Sascha as general manager of this blog would have wanted.

[2] Should anyone feel a desire to learn more about Isaac Barrow I can highly recommend Before Newton: The Life and Times of Isaac Barrow, ed. Mordechai Feingold, CUP, Cambridge, 1990 from which most of the content of this post was distilled.