The man who inverted and squared gravity.

It is well known the Isaac Newton was an aggressively  querulous man ready to start a scientific dispute at the drop of a bodkin. One of his favourite sparring partners was the equally cantankerous Robert Hooke with whom he disputed on more than one occasion. One of their most famous spats concerned the inverse square law of gravity with Hooke aggressively claiming priority for its discovery and demanding that Newton acknowledge this in the Principia, which he was in the process of writing. Newton of course reacted belligerently to Hooke’s claims and threatened to withdraw his masterpiece from publication. It took all of Halley’s diplomatic skill, he was at the time midwifing the book through the press, to advert disaster and persuade Newton to publish but only after Newton had removed all references to his rival from the text. This incident led to the famous correspondence between Halley and Newton that outlined the probably fictionalised account of the genesis of Newton’s book.

The story goes that Halley, Hooke and Christopher Wren were chewing the fat in a London coffee house one day (wouldn’t you just have liked to be sitting on a neighbouring table) when the discussion turned to the newest astronomical theories. The question raised was whether the assumption of an inverse square law of gravity would lead to Keplerian elliptical orbits. Wren, who was himself an excellent mathematician and an early Keplerian, offered a prize of a valuable book-token if either of the others could provide a mathematical proof that this would be the case. Hooke claimed that he could but would not reveal his solution until Halley and Wren had had time to try the problem for themselves. Halley, also a good mathematician, tried to solve the problem but failed and whilst on a visit to Cambridge posed the question to Newton who already had a reputation as a master mathematician. Newton supposedly immediately answered that under the assumption of an inverse square law of gravity the planetary orbits would be ellipses. Halley asked him how he could be so certain to which the good Isaac replied, “because I have calculated it”. Unfortunately Newton had misplaced his calculations but he promised Halley that he would supply him with the necessary proof. The end result of that promise after several intermediary stages and three years hard work was the Principia.

Now it should be clear from this story that neither Newton not Hooke could lay claim to being the father of the inverse square law of gravity as it was obvious from the original coffee house discussion that this hypothesis was common currency in the then astronomical community. This was indeed the case and the true originator of the hypothesis, as acknowledged by Newton in the Principia, was the French mathematician and astronomer Ismael Boulliau who was born on 28th September 1605. 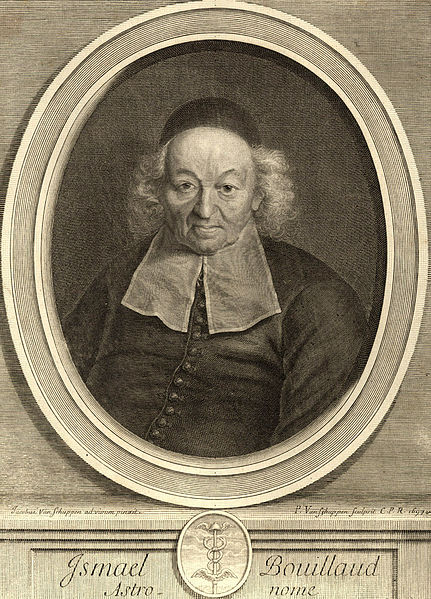 Boulliau who was born a Calvinist, converted to Catholicism and was eventually ordained a priest. Like his friend Fermat he studied law and became a public notary. Later he became a librarian in Paris where he was part of the mathematical scene counting Pascal, Huygens, Mersenne and Gassendi amongst his friends and correspondents. He corresponded with scholars throughout Europe and was one of the earliest foreign members of the Royal Society. He wrote several important mathematical works of which the most significant was his Astronomia philolaica published in 1645. In this work Boulliau, like Wren an early Keplerian, presented his version of the elliptical astronomy. It is here that we can find the earliest statement of the inverse square law.

In his own work Kepler had departed from tradition in not only describing mathematically the planetary orbits but in also suggesting a cause i.e. a driving force for those orbits. This had been previously the terrain of the philosophers and Kepler earned himself much criticism for poaching on their territory. His suggestion was that the sun rotated on its axis and sent out a force, he thought a magnetic one, that swept the planets round their orbits. In Kepler’s theory this force diminished in inverse ratio to its distance from the sun. In his version of the Keplerian astronomy Boulliau argued that if this force existed it would not diminish in direct inverse ratio but in the inverse squared ratio and thus the law of gravity first saw the light of day. It should be pointed out that Boulliau did not accept the existence of such a force but he had introduced it into the contemporary astronomical discussion and we have already seen where it led.

It is interesting to ask why Boulliau thought that the force must diminish according to the inverse square of the distance and the answer takes us back to Kepler and an important piece of methodology in the process of scientific discovery. Kepler was anything but a one trick pony making significant contributions to several areas of astronomy, physics and mathematics, one of his major areas of work being physical optics. In his work in optics Kepler formulated what is considered to be the first modern mathematical law of physics his law of light propagation. This law states that the intensity of a light ray diminishes in strength inversely to the square of the distance travelled. Boulliau argued by analogy that if Kepler’s planetary driving force existed then it too would diminish according to the inverse square of the distance travelled. History and Newton would prove him right against his own better judgement.

The process of scientific discovery is a complex and oft irrational process that nobody has, in my opinion, really succeeded in explaining. However analogy has in the history of science often played an important role in the formulation of new hypotheses and sometimes as in this case it proves fruitful.

28 responses to “The man who inverted and squared gravity.”