Not just an architect.

Today is the birthday of Britain’s most famous architect, the man who built St. Paul’s Cathedral, Sir Christopher Wren (1632 – 1723). My first knowledge of Wren was as the subject of an oft-repeated Clerihew,

Went to dine with some men

He said, “If anyone calls 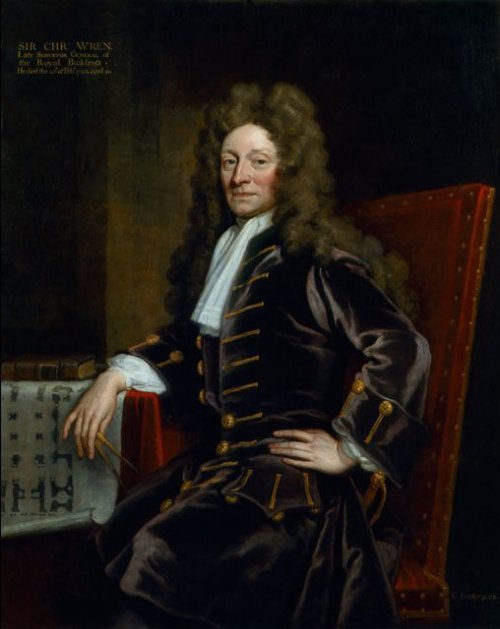 Most people don’t realise that as well as being Britain’s most famous 17th century architect, Wren was also a highly respected mathematician. In fact Isaac Newton named him along with John Wallace and William Oughtred as one of the three best English mathematicians of the 17th century. As a young man he was an active astronomer and was a highly vocal supporter of the then still relatively young elliptical astronomy of Johannes Kepler.

In 1657 he was appointed Gresham Professor of Astronomy one of the two top positions for astronomers in Britain at the time. Gresham College had been founded, at the end of the 16th century, with a bequest from Sir Thomas Gresham, he of the bad money law, and consisted of eight professorships, the holders of which were expected to hold public lectures both in English and Latin in their appointed subjects for the benefit of the artisans of London. As such the Gresham Chairs for Geometry and Astronomy were the first ever chairs for mathematics established in England. During the 17th century many notable English scientist occupied one or other of these chairs.

It was during his time as Gresham Professor that the semi-formal group of scientists came together at Gresham in the grouping that led to the founding of the Royal Society, in which Wren played a leading role serving at times as its president.

In 1661 he was appointed to the other chair for astronomy, the Savilian in Oxford, the same route taken by some of his predecessors such as Briggs and his successors such as Halley. Whilst at Oxford he developed his interest in architecture, which led to him being appointed Surveyor of Works to Charles II. Wren was a true polymath whose scientific activities covered a very wide range of bases. Both the Wikipedia and the MacTutor articles are worth a read for more details and for anyone really interested in Wren the scientist I recommend Jim Bennett’s  The mathematical science of Christopher Wren (Cambridge-New York, 1982).

In the history of astronomy Wren occupies a legendary position as the man who offered a book token as a prize for the first person who could demonstrate that an inverse square law of gravity would lead to elliptical planetary orbits. Unable to solve the challenge Edmond Halley famously asked Isaac Newton, the start of a process that would culminate  in the publication of the Principia.

11 responses to “Not just an architect.”