Looking up to Marius

One of the  principal goals of the Simon-Marius-Anniversary-2014 has been achieved. The committee of the International Astronomical Union (IAU) responsible for the naming of minor planets, comets and natural satellites has announced that the asteroid “1980 SM” will in future be known as “(7984) Marius”. The minor planet in the so-called main belt between Mars and Jupiter was first observed at the Klet’ Observatory (Hvězdárna Kleť) on 29th September 1980.

The Minor Planet Center (MPC) announced the decision of the Committee for Small-Body Nomenclature of the International Astronomical Union (IAU) at the end of March, whereby the asteroid discovered by the Czech astronomer Zdeňka Vávrová will be named after the Ansbach Court Astronomer, Simon Marius (1573–1624). The heavenly body has an orbit of 4.27 years and is 2.63 AU distance from the sun. Its average speed is 7.57 km/s. 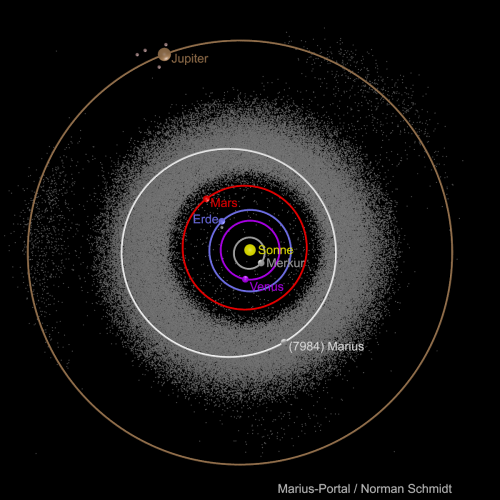 The recognition by the International Astronomical Union is a great honour for the Franconian astronomer whose magnum opus “Mundus Jovialis” was published four hundred years ago. In this work he describes the discovery of the four largest Jupiter moons, which Galileo Galilei and Simon Marius observed for the first time in January 1610. Galileo, having published first, accused Marius of plagiarism, a charge that was only shown to be unfounded at the beginning of the twentieth-century.

Various events within the framework of the Simon-Marius-Anniversary 2014 recognise his achievements and the Nürnberger Astronomische Gesellschaft has setup the 24-Language Marius-Portal, which brings together all the electronic sources as well as the secondary literature to make them available to the international research community and all other interested parties. The naming of the asteroid is the second milestone.

Filed under History of Astronomy