Over at Skull in the Stars gg has written another one of his excellent articles on 19th century optics. This time the object of his scrutiny is the Talbot effect a consequence of diffraction that was first described by Henry Fox Talbot, best know as one of the pioneers of photography. Stimulated by his post I have decided to write a few words about the origins of diffraction in the 17th century.

Diffraction was first investigated and described by the Jesuit astronomer, mathematician and physicist Francesco Maria Grimaldi (1618 – 1663) and published posthumously in his Physico mathesis de lumine, coloribus, et iride, aliisque annexis libri duo in 1665. Grimaldi was one of the prominent products of Clavius’ mathematical education programme who as well as his investigation into light also conducted empirical experiments into the laws of free fall, confirming Galileo’s results, together with another Jesuit scientist Giovanni Battista Riccioli (1598 -1671) with whom he also produced the most accurate map of the moon in the 17th century. On the basis of his optical investigation and in particular his discovery of diffraction, Grimaldi developed a wave theory of light. It was Grimaldi who gave this particular optical phenomenon its name deriving it from the Latin verb diffringere ‘break into pieces’ from ‘dis’ apart and frangere ‘to break’. 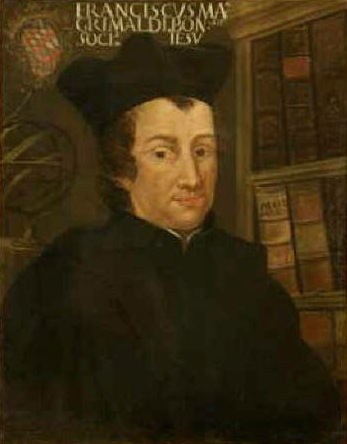 The first description of a diffraction grating appears to come from the Scottish mathematician, physicist and optician James Gregory in a letter to John Collins. It might be argued that Gregory should not get the credit as his description was in a private letter and not in a publication but this is not the case. John Collins is one of the figures in the 17th century who are described as ‘post offices’; other examples are Marin Mersenne, Henry Oldenburg, Athanasius Kircher and Nicolas-Claude Fabri de Peiresc. These men were responsible for the dissemination of scientific knowledge within the scholarly community before the invention of academic journals. They controlled vast correspondence networks with like-minded scholars throughout Europe or even the world; letters received from one correspondent were copied or digested and sent on to other correspondents working in similar or related fields. This meant that a letter sent to one of these men was meant for public consumption and can be regarded by the historian as a quasi-publication.

Collins was a maths groupie who corresponded with most of the leading mathematicians of his age. His most notable achievements was the introduction of the then unknown Isaac Newton into the English scholarly community and his bringing together of the young and unestablished Newton and Leibniz; a meeting that did not take place under a good star. That Gregory’s letter to Collins was intended for circulation is obvious from his own remarks, in a long letter, dated 13 May 1673, on various topics; he remarks on diffraction:

If ye think fit, ye may signify to Mr. Newton a small experiment, which (if he know it not already) may be worthy of his consideration. Let in the sun’s light by a small hole to a darkened house, and at the hole place a feather, (the more delicate and white the better for this purpose,) and it shall direct to a white wall or paper opposite to it a number of small circles and ovals, (if I mistake them not) whereof one is somewhat white, (to wit, the middle, which is opposite to the sun,) and all the rest severely coloured. I would gladly hear his thoughts of it.

Newton was then the new star in the optics heaven having brought his reflecting telescope and his thoughts on refraction, which he called refrangibility, to the attention of the Royal society in the preceding two years. In fact in the first part of the letter Gregory discusses technical matters concerned with his and Newton’s respective reflecting telescopes. Gregory was not the only optical physicist to draw Newton’s attention to the phenomenon of diffraction. In the disputes that followed Newton’s paper on refraction and the nature of light (which I have discussed here) one of the disputants, the Jesuit Ignace Gaston Pardies, inquired whether Grimaldi’s recent discovery, diffraction could explain the divergency in the spectrum; Newton answer is an interesting early insight into his philosophy of science:

In answer to this, it is to be observed that the doctrine, which I explained concerning refraction and colours, consists only in certain properties of light, without regarding any hypotheses by which those properties might be explained. For the best and safest method of philosophising seems to be, first to enquire diligently into properties of things, and to establish those properties by experiments and then to proceed more slowly to hypotheses for the explanation of them. For hypotheses should be employed only in explaining the properties of things, but not assumed in determining them; unless so far as they may furnish experiments. For if the possibility of hypotheses is to be the test of truth and reality of things. I see not how certainty can be obtained in any science; since numerous hypotheses may be derived, which shall seem to overcome new difficulties. Hence it has been here though necessary to lay aside all hypotheses, as foreign to the purpose…

In 1675 in the ongoing dispute over his theories of colour Newton wrote An Hypothesis explaining the properties of Light discoursed in my several Papers. This highly interesting document that contains a description of Newton’s corpuscular mechanical philosophy of light, and which I won’t go into here, contains a discussion of diffraction in its conclusion. Here Newton described diffraction, that had been demonstrated in the same year at the Royal Society by Robert Hooke (who of course claimed it as his own discovery), as only a new kind of refraction.

Given all the attention that diffraction had received in Newton’s optical activities in the 1670s it is not surprising that it resurfaced in 1704 when Newton finally published the results of his optical experiments in his Opticks. The relatively short third and final book is devoted to the subject that Newton here calls inflexion, he write:

Grimoldo has inform’d us, that if a beam of the Sun’s Light be let into a dark Room through a very small Hole, the Shadows of things in this Light will be larger than they ought to be if the Rays went on by the Bodies in straight Lines, and that these Shadows have three parallel Fringes, Bands or Ranks of colour’d Light adjacent to them. But if the hole be enlarged the Fringes grow broad and run into one another, so that they cannot be distinguished. These broad Shadows and Fringes have been reckon’d by some to proceed from the ordinary refraction of the Air, but without due examination of the Matter. For the circumstances of the Phaenomenon, so far as I have observed them, are as follows.

Obs. 1.  I made in a piece of Lead a small hole with a Pin, whose breadth was the 42d part of an Inch. For 21 of those Pins laid together took up the breadth of half an Inch. Through this Hole I let into my darken’d Chamber a beam of the Sun’s light and found the shadows of Hairs, Threds, Pins, and such slender Substances placed in this beam of Light were considerably broader than they ought to be, if the Rays of Light passed on by these Bodies in right Lines.

There then follow 18 pages of detailed description as to how Newton enquired diligently into and established the properties of inflexions or as we would say diffraction. Along the way he briefly refers to Gregory’s diffraction grating without however mentioning Gregory:

So by looking on the Sun through a Feather or black Ribband held close to the Eye, several Rainbows will appear; the Shadows which the Fibres or Threds cast on the Tunica Retina, being boarder’d with the like Fringes of Colours.

At the end of all his observation Newton goes on to make the following comment:

When I made the foregoing Observations, I design’d to repeat most of them with more care and exactness, and to make some new ones for determining the manner how Rays of Light are bent in their passage by Bodies, for making the Fringes of Colours with the dark lines between them. But I was then interrupted, and cannot now think of taking these things into farther consideration. And since I have not finish’d this part of my design, I shall be proposing only some Queries, in order to a farther search to be made by other.

Query 1. Do not Bodies act upon Light at a distance, and by their action bend its rays; and is not this action (caeteris paribus) strongest at the least distance?

Qu. 2. Do not the Rays, which differ in Refrangibility [Refractability] differ also in Flexibility [diffractability]; and are not by their different Inflexions [diffractions] separated from one another, so as after separation to make the Colours in the three Fringes above described? And after what manner are they inflected [diffracted] to make those Fringes?

Qu. 3. Are not the Rays of Light in passing by the edges and sides of Bodies, bent several times backwards and forwards, with a motion like that of an Eel? And do not the three Fringes of colour’d Light above-mention’d arise from three such bendings?

Qu. 4. Do not the Rays of Light which fall upon Bodies and are reflected or refracted, begin to bend before they arrive at the Bodies; and are they not reflected, refracted, and inflected, by one and the same Principle, acting variously in various Circumstances?

Qu. 5. Do not Bodies and Light act mutually upon one another: that is to say, Bodies upon Light in emitting, reflecting, refracting, and inflecting it, and Light upon Bodies for heating them, and putting their parts into a vibrating motion wherein heat consists?

Although he lived for another 24 years after the initial publication of his book Newton never returned to his optical studies and it was only in the 19th century after the adoption of the wave theory of light as propagated by Young and Fresnel that satisfactory answers were found for Newton’s queries.