An eighteenth-century cartographical community in Nürnberg

If you walk up Burgstraße in the city of Nürnberg in the direction of the castle, you will see in front of you the impressive Baroque Fembohaus, which from 1730 to 1852 was the seat of the cartographical publishing house Homännische Erben, that is “Homann’s Heirs” in English. But who was Homann and why was the business named after his heirs?

Johann Baptist Homann (1664–1724) was born in Öberkammlach in the south of Bavaria. He was initial educated at a Jesuit school and at some point, entered the Dominican Cloister in Würzburg, where he undertook, according to his own account, his “studia humaniora et philosophica.”

In 1687 he left the cloister moved to Nürnberg and converted to Protestantism. Over the next ten years he vacillated between Catholicism and Protestantism, leaving Nürnberg during the Catholic phases, and returning during the Protestant phases. In 1691 in Nürnberg, he was registered for the first time as a notary public. Around the same time, he started his career as a map engraver. It is not known how or where he learnt this trade, although there are claims that he was entirely self-taught. A map of the district surrounding Nürnberg, produced in 1691/92, shows Homann already as a master in cartographic engraving. From 1693 to 1695 he was in Vienna, then he returned for a time to Nürnberg, leaving again for Erlangen in 1696. Around 1696 to 1697, he was engraving maps in Leipzig.

He appears to have final settled on life as a protestant and permanent residency in Nürnberg in 1698. In 1702 he established a dealership and publishing house for cartography in the city, producing and selling maps, globes, and atlases. His dealership also produced and sold scientific instruments. The field that Homann had chosen to enter was by the beginning of the eighteenth century well established and thriving, with a lot of very powerful competition, in particular from France and Holland. Homann entered the market from a mercantile standpoint rather than a scientific one. He set out to capture the market with high quality products sold more cheaply than the competition, marketing copies of maps rather than originals. In a relatively short time, he had established himself as the dominant cartographical publisher in Germany and also a European market leader.

His dealership offered single sheet maps for sale, but he became the first German cartographer to sell atlases on a large scale and is considered the second most important German cartographer after Mercator. His first atlas with forty maps appeared in 1707. This was expanded to the Großen Atlas über die ganze Welt (The Big Atlas of the Entire World), with one hundred and twenty-six maps in 1716.

A fine example of Homann’s 1716 map of Burgundy, one of France’s most important wine regions. Extends to include Lake Geneva in the southwest, Lorraine in the north, Champaigne (Champagne) and Angers to the northwest and Bourgogne to the west. Depicts mountains, forests, castles, and fortifications and features an elaborate title cartouche decorated with cherub winemakers in the bottom right. A fine example of this rare map. Produced by J. H. Homann for inclusion in the Grosser Atlas published in Nuremberg, 1716. Source: Wikimedia Commons

By 1729 it had around one hundred and fifty maps. Johann Baptist’s success was richly acknowledged in his own lifetime. In 1715 he was appointed a member of the Preußischen Akademie der Wissenschaften (The Prussian Academy of Science) and in 1716 he was appointed Imperial Geographer by the Holy Roman Emperor, Karl VI. 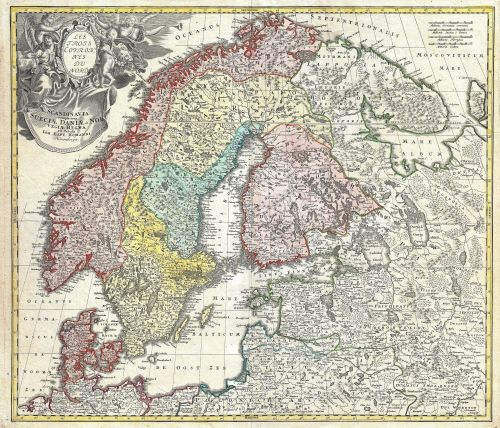 A detailed c. 1730 J. B. Homann map of Scandinavia. Depicts both Denmark, Norway, Sweden, Finland and the Baltic states of Livonia, Latvia and Curlandia. The map notes fortified cities, villages, roads, bridges, forests, castles and topography. The elaborate title cartouche in the upper left quadrant features angels supporting a title curtain and a medallion supporting an alternative title in French, Les Trois Covronnes du Nord . Printed in Nuremburg. This map must have been engraved before 1715 when Homann was appointed Geographer to the King. The map does not have the cum privilegio (with privilege; i.e. copyright authority given by the Emperor) as part of the title, however it was included in the c. 1750 Homann Heirs Maior Atlas Scholasticus ex Triginta Sex Generalibus et Specialibus…. as well as in Homann’s Grosser Atlas . Source: Wikimedia Commons

The publishing house continued to grow and prosper until Johann Baptist’s death in 1724, when it was inherited by his son Johann Christian Homann (1703–1730).

Johann Christian studied medicine and philosophy in Halle. He graduated doctor of medicine in 1725, following which he went on a study trip, first returning to Nürnberg in 1729. During his absence the publishing house was managed by Johann Georg Ebersberger (1695–1760) and later together with Johann Christian’s friend from university Johann Michael Franz (1700­–1761).

When Johann Christian died in 1730, he willed the business to Ebersberger and Franz, who would continue to run the business under the name Homännische Erben. The publishing house passed down through several generations until Georg Christoph Fembo (1781­–1848) bought both halves of the business in 1804 and 1813. Fembo’s son closed the business in 1852 and in 1876 the entire collection of books, maps, engravings, and drawing were auctioned off, thus destroying a valuable source for the history of German cartography.

Today there is a big market for fictional maps based on fantasy literature such as Lord of the Rings. This is nothing new and Early Modern fiction also featured such fictional maps, for example Thomas More’s Utopia (1516). One very popular medieval myth concerns the Land of Cockaigne, a fictional paradise of pleasure and plenty also known as The Land of Milk and Honey. The German version is Schlaraffenland (literally the Land of the Lazy Apes). The most well-known version of the myth in the seventeenth century was written by Johann Andreas Schneblins (d. 1702) and based on Schneblins’ account of his travels in the utopia of Schlaraffenland Homann produced a map his very popular Accurata Utopiae Tabula. 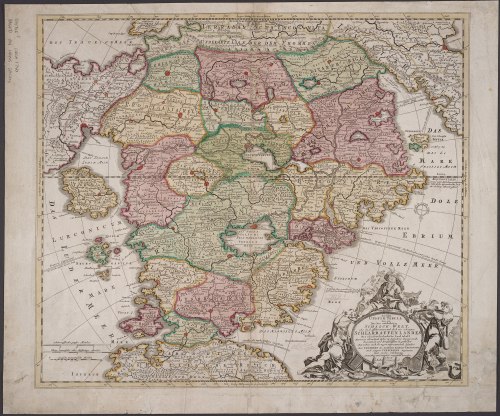 From the very beginning one distinctive feature of the publishing house was Homann’s active cooperation with other scholars and craftsmen. From the beginning Johann Baptist worked closely with the engraver, art dealer, and publisher Christoph Weigel the Older (1665–1725).

Weigel’s most significant publication was his Ständebuch (1698) (difficult to translate but Book of the Trades and Guilds).

Weigel was very successful in his own right but he cooperated very closely with Homann on his map production. 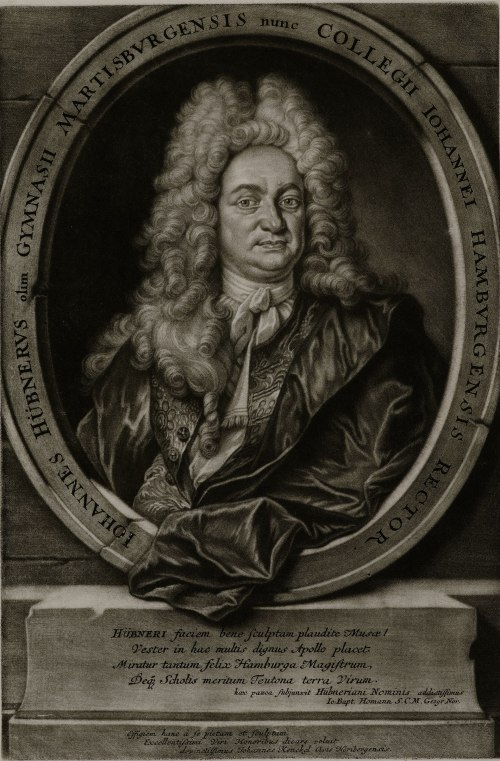 Together the two men produced school atlases according to Hübner’s pedagogical principles. In 1710 the Kleiner Atlas scholasticus von 18 Charten (Small School Atlas with 18 Maps) was published.

Johann Gottfried Gregorii (1685–1770) was a central figure in the intellectual life of eighteenth-century Germany. A geographer, cartographer, historian, genealogist, and political journalist, he put out a vast number of publications, mostly under the pseudonym Melissantes.

In his geographical, cartographical, and historical work he cooperated closely with both Johann Baptist Homann and Christoph Weigel.

One of the Homann publishing house’s most important cooperation’s was with the Nürnberg astronomer Johann Gabriel Doppelmayr (1677–1750). 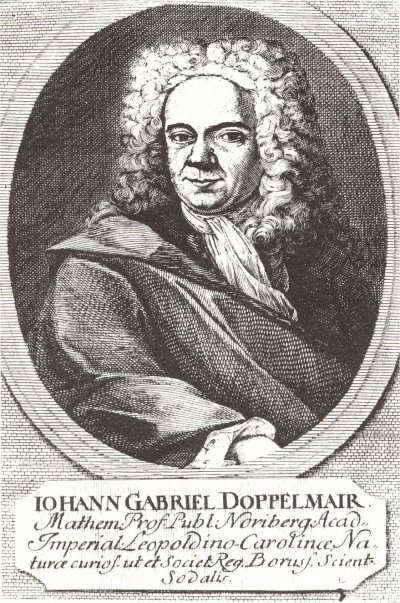 Doppelmayr was professor for mathematics at the Aegidianum, Germany’s first modern high school, and is best known for two publication his Historische Nachricht Von den Nürnbergischen Mathematicis und Künstlern (1730), an invaluable source for historian of science and his celestial atlas, Atlas Novus Coelestis (1742). Doppelmayr had been supplying celestial charts for the Homann atlases but his Atlas Novus Coelestis, which was published by Homännische Erben, contained thirty spectacular colour plates and was a leading celestial atlas in the eighteenth century. 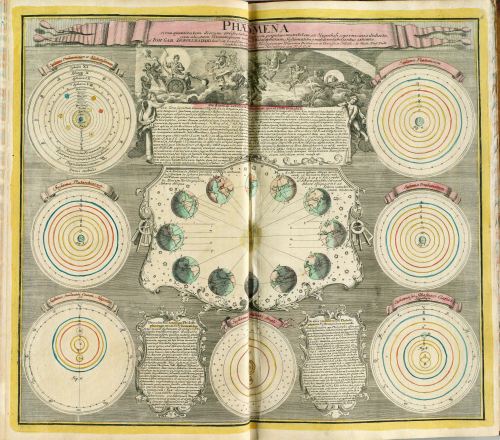 He worked together with Johann Michael Franz and produced several astronomical publications for the Homännische Erben. Franz as well as being co-manager of the publishing house was also an active geographer, who became professor in Göttingen in 1755. He also published a series of his own books on geographical themes. He sold his share of the publishing house on his younger brother Jacob Heinrich Franz (1713–1769) in 1759.

Without any doubt Homann’s most important or significant employee, at least with hindsight, was the cartographer and astronomer Tobias Mayer (1723–1762), who is these days is best known for having calculated the Moon’s orbit accurately enough to make the lunar distance method of determining longitude viable. A self-taught mathematicus he had already published a town plan of Esslingen, two books on mathematics and one on fortifications, when he was appointed to the Homännische Erben in 1746. 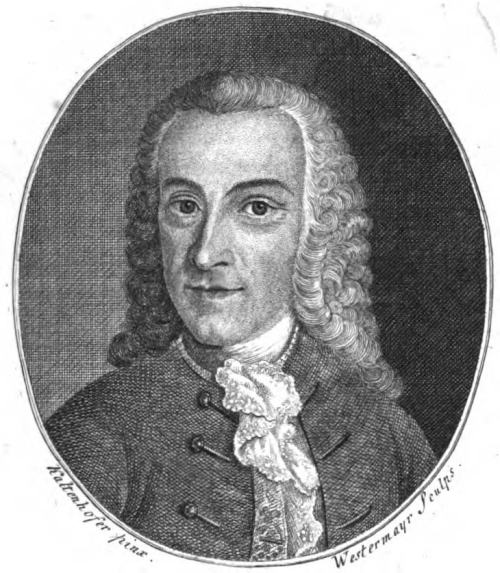 It was during his time in Nürnberg that he did his work on lunar astronomy. Like Lowitz, and Franz, Mayer also became a professor in Göttingen, in his case for economics and mathematics.

The three Göttingen professors–Lowitz, Franz, and Mayer–whilst still working for Homann in Nürnberg founded the Cosmographische Gesellschaft (Cosmographical Society), with the aim of improving the standards of cartography and astronomy. Due to lack of funding they never really got their plans of their grounds. Their only products being some propaganda publications for the society written by Franz and one publication from Mayer on his lunar research.

Each of the scholars, briefly sketched here was a leading figure in the intellectual landscape of eighteenth-century Germany and they were all to some extent rivals on the open knowledge market. However, they cooperated rather than competed with each other and in doing so increased the quality of their output.