The alchemist, who became a cosmographer

As an Englishman brought up on tales, myths and legends of Francis Drake, Walter Raleigh, Admiral Lord Nelson, the invincible Royal Navy and Britannia rules the waves, I tend not to think about the fact that Britain was not always a great seafaring nation. As an island there were, of course, always fisher boats going about their business in the coastal waters and archaeology has shown us that people have been crossing the strip of water between Britain and the continent, as long as the island has been populated. However, British sailors only really began to set out onto the oceans for distant lands in competition to their Iberian brethren during the Early Modern Period. Before the start of these maritime endeavours there was a political movement in England to get those in power to take up the challenge and compete with the Spanish and the Portuguese in acquiring foreign colonies, gold, silver and exotic spices. One, today virtually unknown, man, whose writings played a not insignificant role in this political movement was the alchemist Ricard Eden[1] (c. 1520–1576).

Richard Eden[2] was born into an East Anglian family of cloth merchants and clerics, the son of George Eden a cloth merchant. He studied at Christ’s College Cambridge (1534–1537) and then Queen’s College, where he graduated BA in 1538 and MA in 1544. He studied under Sir Thomas Smith (1533–1577) a leading classicist of the period, who was also politically active and a major supporter of colonialism, which possibly influenced Eden’s own later involvement in the topic.

Through Smith, Eden was introduced to John Cheke (1514–1557), Roger Ascham (c. 1515–1568) and William Cecil (1520–1598), all of whom were excellent classicists and statesmen. Cecil would go on under Elizabeth I to become the most powerful man in England. From the beginning Eden moved in the highest intellectual and political circles.

After leaving Cambridge Eden was appointed first to a position in the Treasury and then distiller of waters to the royal household, already indicating an interest in and a level of skill in alchemy. Eden probably acquired his interest in alchemy from his influential Cambridge friends, who were all eager advocates of the art. However, he lost the post, probably given to someone else by Somerset following Henry VIII’s death in 1547 and so was searching for a new employer or patron.

Through a chance meeting he became acquainted with the rich landowner Richard Whalley, who shared his interest in alchemy. Whalley provided him with a house for his family and an income, so that he could devote himself to both medicinal and transmutational alchemy. His activities as an alchemist are not of interest here but one aspect of his work for Whalley is relevant, as it marked the beginning of his career as a translator.

Whalley was obviously also interested in mining for metal ores, because he commissioned Eden to translate the whole of Biringuccio’s Pirotechnia into English. Although he denied processing any knowledge of metal ores, Eden accepted the commission and by 1552 he had completed twenty-two chapters, that is to the end of Book 2. Unfortunately, he lent the manuscript to somebody, who failed to return it and so the project was never finished. In fact, there was no English translation of the Pirotechnia before the twentieth century. Later he produced a new faithful translation of the first three chapters dealing with gold, silver and copper ores, only omitting Biringuccio’s attacks on alchemy, for inclusion, as we shall see, in one of his later works.

In 1552, Eden fell out with Whalley and became a secretary to William Cecil. It is probable the Cecil employed him, as part of his scheme to launch a British challenge to the Iberian dominance in global trade. In his new position Eden now produced a translation of part of Book 5 of Sebastian Münster’s Cosmographia under the title A Treatyse of the New India in 1553. As I explained in an earlier blog post Münster’s Cosmographia was highly influential and one of the biggest selling books of the sixteenth century.

This first cosmographical publication was followed in 1555 by his The Decades of the newe worlde or west India, containing the nauigations and conquests of the Spanyardes… This was a compendium of various translations including those three chapters of Biringuccio, probably figuring that most explorers of the Americas were there to find precious metals. The main parts of this compendium were taken from Pietro Martire d’Anghiera’s De orbe novo decades and Gonzalo Fernández de Oviedo y Valdés’ Natural hystoria de las Indias.

Pietro Martire d’Anghiera (1457–1526) was an Italian historian in the service of Spain, who wrote the first accounts of the explorations of Central and South America in a series of letters and reports, which were published together in Latin. His De orbe novo (1530) describes the first contacts between Europeans and Native Americans. 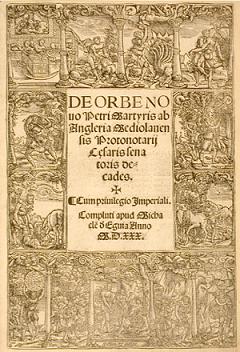 Gonzalo Fernández de Oviedo y Valdés (1478–1557) was a Spanish colonist, who arrived in the West Indies a few years after Columbus. His Natural hystoria de las Indias (1526) was the first text to introduce Europeans to the hammock, the pineapple and tobacco. 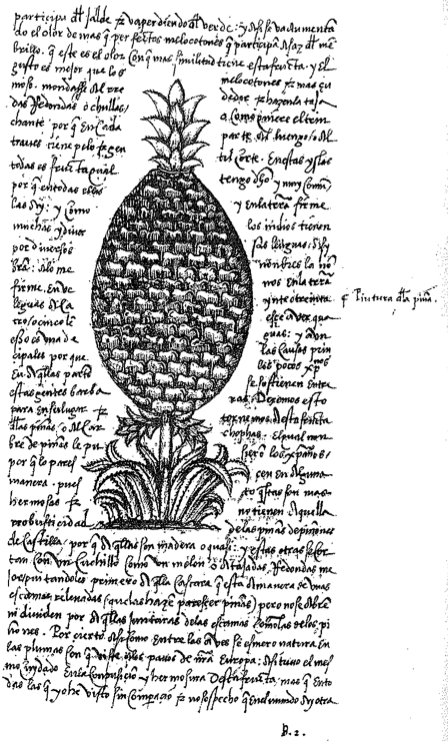 Important as these writings were as propaganda to further an English involvement in the new exploration movement in competition to the Iberian explorers, it was probably Eden’s next translation that was the most important.

As Margaret Schotte has excellently documented in her Sailing School (Johns Hopkins University Press, 2019) this new age of deep-sea exploration and discovery led the authorities in Spain and Portugal to the realisation that an active education and training of navigators was necessary. In 1552 the Spanish Casa de la Contratación established a formal school of navigation with a cátedra de cosmografia (chair of cosmography). This move to a formal instruction in navigation, of course, needed textbooks, which had not existed before. Martín Cortés de Albacar (1510–1582), who had been teaching navigation in Cádiz since 1530, published his Breve compendio de la sphere y de la arte de navegar in Seville in 1551.

In 1558, an English sea captain from Dover, Stephen Borough (1525–1584), who was an early Artic explorer, visited Seville and was admitted to the Casa de la Contratación as an honoured guest, where he learnt all about the latest instruments and the instruction for on going navigators. On his return to England, he took with him a copy of Cortés’ Breve compendio, which he had translated into English by Richard Eden, as The Arte of Navigation in 1561. This was the first English manual of navigation and was immensely popular going through at least six editions in the sixteenth century.

In 1562, Eden became a companion to Jean de Ferrières, Vidame of Chartres, a Huguenot aristocrat, who raised a Protestant army in England to fight in the French religious wars. Eden, who was acknowledged as an excellent linguist, stayed with de Ferrières until 1573 travelling extensively throughout France and Germany. Following the St. Batholomew’s Day massacre, which began in the night of 23–24 August 1572, Eden together with de Ferrières party fled from France arriving in England on 7 September 1573. At de Ferrières request, Elizabeth I admitted Eden to the Poor Knights of Windsor, a charitable organisation for retired soldiers, where he remained until his death in 1576.

This was published posthumously together with his Arte of Navigation in 1579. His final translation was of Ludovico de Varthema’s (c. 1470–1517) Intinerario a semi-fictional account of his travels in the east. This was published by Richard Willes in The History of Travayle an enlarged version of his Decades of the newe worlde in 1577.

Eden’s translations and publications played a significant role in the intellectual life of England in the sixteenth century and were republished by Richard Hakluyt (1553–1616) in his The Principal Navigations, Voiages, Traffiques and Discoueries of the English Nation (1589, 1598, 1600), another publication intended as propaganda to promote English colonies in America.

Unlike Sebastian Münster or Richard Hakluyt, Eden has been largely forgotten but he made important and significant contributions to the history of cosmography and deserves to be better known.

[1] I want to thank Jenny Rampling, whose book The Experimental Fire, which I reviewed here, made me aware of Richard Eden, although, I have to admit, he turns up, managing to slip by unnoticed in other books that I own and have read.

[2] The biographical details on Eden are mostly taken from the ODNB article. I would like to thank the three wonderful people, who provided me with a pdf of this article literally within seconds of me asking on Twitter

One response to “The alchemist, who became a cosmographer”