The solar year ends and starts with a great conjunction

Today is the winter solstice, which as I have explained on various occasions, in the past, is for me the natural New Year’s Eve/New Year’s Day rather than the arbitrary 31 December/1 January. 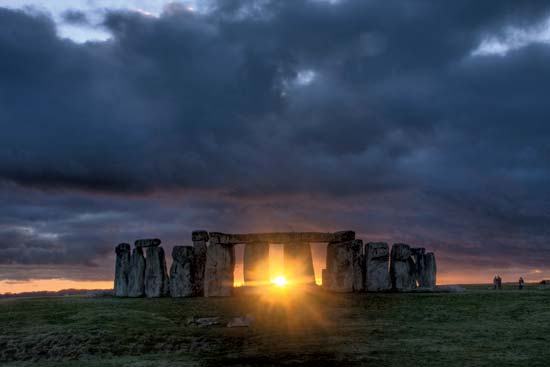 Today in also the occurrence of a so-called great conjunction in astronomy/astrology, which is when, viewed from the Earth, Jupiter and Saturn appear closest together in the night sky. Great conjunctions occur every twenty years but this one is one in which the two planets appear particularly close to each other.

Great conjunctions played a decisive role in the life of Johannes Kepler. As a youth Kepler received a state grant to study at the University of Tübingen. The course was a general-studies one to prepare the students to become Lutheran schoolteachers or village pastors in the newly converted Protestant state. Kepler, who was deeply religious, hoped to get an appointment as a pastor but when a vacancy came up for Protestant mathematics teacher in Graz, Michael Mästlin recommended Kepler and so his dream of becoming a pastor collapsed. He could have turned down the appointment but then he would have had to pay back his grant, which he was in no position to do so.

In 1594, Kepler thus began to teach the Protestant youths of Graz mathematics. He accepted his fate reluctantly, as he still yearned for the chance to serve his God as a pastor. Always interested in astronomy and converted to heliocentricity by Michael Mästlin, whilst still a student, he had long pondered the question as to why there were exactly six planets. Kepler’s God didn’t do anything by chance, so there had to be a rational reason for this. According to his own account, one day in class whilst explaining the cyclical nature of the great conjunctions in astronomy/astrology, which is when, viewed from the Earth, Jupiter and Saturn appear closest together in the night sky, he had a revelation.  Looking at the diagram that he had drawn on the board he asked himself, “What if his God’s cosmos was a geometrical construction and this was the determining factor in the number of planets?” 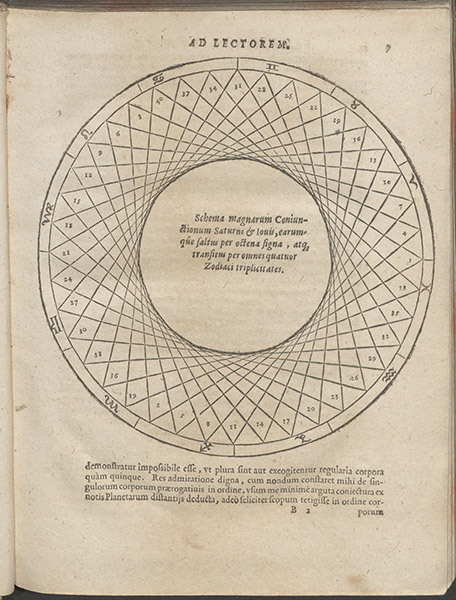 Kepler’s geometrical diagram of the cyclical nature of the great conjunctions in his Mysterium Cosmographicum Source: Linda Hall Library

Kepler determined from that point on in his life to serve his God as an astronomer by revealing the geometric structure of God’s cosmos. He first experimented with various regular polygons, inspired by the great conjunction diagram, but couldn’t find anything that fit, so he moved into three dimensions and polyhedra. Here he struck gold and decided that there were exactly six planets because their orbital spheres were separated by the five regular Platonic solids.

He published this theory in his first academic book, Mysterium Cosmographicum (lit. The Cosmographic Mystery, alternately translated as Cosmic Mystery, The Secret of the World) 1597. The book also contains his account of the revelation inspired by the great conjunction diagram. This was the start of his whole life’s work as a theoretical astronomer, which basically consisted of trying to fine tune this model.

In the early seventeenth century, Kepler was still deeply religious, a brilliant mathematician and theoretical astronomer, and a practicing astrologer. As an astrologer Kepler rejected the standard Ptolemaic sun sign i.e., Aquarius, Virgo, Gemini, etc., astrology. Normal horoscope astrology. Sun signs, or as most people call them star signs, are 30° segments of the circular ecliptic, the apparent path of the Sun around the Earth and not the asterisms or stellar constellations with the same names. Kepler developed his own astrology based entirely on planetary aspects, that is the angles subtended by the planets with each other on the ecliptic. (see the Wikipedia article Astrological aspect). Of course, in Kepler’s own astrology conjunctions play a major role.

Turning to the so-called Star of Bethlehem, the men from the east (no number is mentioned), who according to Matthew 2:2, followed the star were, in the original Greek, Magoi (Latin/English Magi) and this means they were astrologers and not the sanitised wise men or kings of the modern story telling. Kepler would have been very well aware of this. This led Kepler to speculate that what the Magoi followed was an important astrological occurrence and not a star in the normal meaning of the word. One should note that in antiquity all visible celestial objects were stars. Stars simple Asteres, planets (asteres) planētai wandering (stars) and a comet (aster) komētēs, literally long-haired (star), so interpreting the Star of Bethlehem as an astrological occurrence was not a great sketch.

His revelation in 1603 was that this astrological occurrence was a great conjunction and in fact a very special one, a so-called fiery trigon, one that links the three fire signs, Aries, Leo, Sagittarius.

Calculating backwards, Kepler the astronomer, determined that one such had occurred in 7 BCE and this was the star that the Magoi followed.

Whether Kepler’s theory was historically correct or an accepted view in antiquity is completely impossible to determine, is the Bible story of Jesus’ birth even true? In Kepler’s own time, nobody accepted his deviant astrology, so I very much doubt that many people accepted his Star of Bethlehem story, which he published in his De Stella Nova in Pede Serpentarii (On the New Star in the Foot of the Serpent Handler) in 1606.

I’m sure that a great conjunction on the date of the winter solstice has a very deep astrological significance but whether astrologers will look back and say, “Ah, that triggered this or that historical occurrence” only the future will tell.

I thank all of those who have read, digested and even commented upon my outpourings over the last twelve months and fully intend to do my best to keep you entertained over the next twelve. No matter which days you choose to celebrate during the next couple of weeks, in which way whatsoever and for what reasons, I wish all of my readers all the best and brace yourselves for another Renaissance Mathematicus Christmas Trilogy starting on 25 December.