“A sea of wild, woolly thinking!”

Today’s musings on the history of science re-examine a topic that I have already dealt with several times in the past, that of presentist judgements on the heuristic used by a historical figure to find or reach their solution to a given scientific problem. In the world of scientific investigations, a heuristic is the scaffolding consisting of assumptions and presumptions that the investigator erects to direct and guide his efforts to explain a given set of phenomena. It is not necessary for a heuristic to be factually true, whatever that may mean. What  is important is that the heuristic delivers useful developments within the phenomena under investigation. Already in the sixteenth century Christoph Clavius, an excellent logician and philosopher of science pointed out that false premisses in science can nevertheless lead to correct deductions and therefore suggested falsification as a method to check scientific hypotheses; yes, Clavius was a Popperian three and a half centuries before Popper. 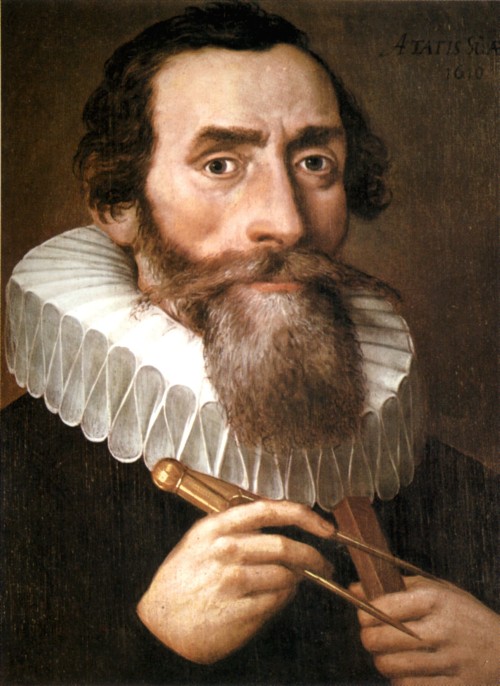 Portrait of Kepler by an unknown artist, 1610 Source: Wikimedia Commons

The particular heuristics that I’m going to examine here are those on which Johannes Kepler erected his whole astronomical planetary theories, starting with his Mysterium Cosmographicum (1596) and all the way through to his Harmonices mundi (1619) and his Epitome Astronomiae Copernicanae (1617–1621). In her Measuring the Universe, Kitty Ferguson refers to Kepler’s work as follows:

His most celebrated discoveries seem like small islands of dazzling insights in a sea of wild, woolly thinking.[1]

The sea of wild, woolly thinking that Ferguson is referring to here is the heuristic that Kepler applied to his investigations to arrive at his famous conclusions concerning the shape and laws of the cosmos and also to a large part of those conclusions, which as opposed to his three laws of planetary motions today get ignored by everybody except the historians. Let us examine the collection of assumptions and presumptions under which Kepler conducted his research. Just how wild and woolly were they?

Kepler’s first and most important assumption was his devout and unquestioning belief in his Christian God. This is, of course, like a red rag to a bull to the gnu atheists, who continue to insist that religion and science should never occupy the same building let alone the same brain. This is problematic, as his belief in his God was the principle and singular driving force in all of Kepler’s scientific work. To understand this, we need to look at some more of Kepler’s assumptions. For Kepler it was obvious that his God had created the cosmos and that he had done so specifically for mankind. In his belief that God exists, and that God had created the world, Kepler differed in no way from the vast majority of his fellow Europeans in the late sixteenth and early seventeenth centuries but Kepler and not just Kepler took it further.

What is here central to the issue is Kepler’s personal perception of his God. Kepler’s God is not one of those ancient Greek or Scandinavia goods, who seem to take great pleasure in personally dicking around in the lives of selective individuals, just for the fun of it. His God is also not the fire and brimstone god of the Old Testament, who wipes out cities or murders babies. Kepler’s God is a rational, logical entity; in fact, Kepler’s God is a mathematician, which for Kepler means he is a geometer. Kepler is by no means the only natural philosophers in the Renaissance/Early Modern Period, who held this view of God. In fact, it was a common trope in the Middle Ages that produced a corresponding iconography. 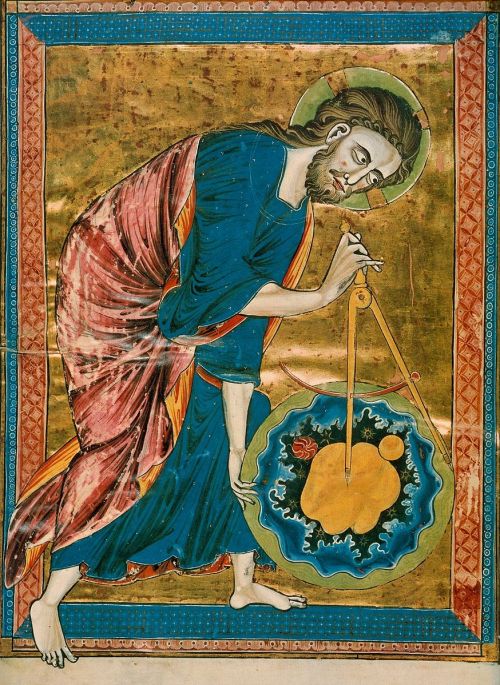 In Kepler’s opinion his mathematician God had created his cosmos according to a completely logical, mathematical construction plan and it was Kepler’s task as an astronomer and natural philosopher to reconstruct and explicate that construction plan. He shared this view with many others in the Early Modern Period including both Galileo and Newton.

Before we go into detail, we need to pause and take stock. Kepler believed that a mathematician god had created the cosmos on mathematical principles and therefore he needs to discover and expose the mathematical patterns of his god’s construction plan. Leave out Kepler’s god and you should realise that Kepler’s assumptions and approach are no different to those used by scientists today; i.e. the cosmos is fundamentally logical and can be analysed, described and explained using mathematical models. The fact that this approach works so well led historians and philosophers to describe the so-called scientific revolution, as the mathematisation of nature but on the other side led to Eugene Wigner’s infamous essay, The Unreasonable Effectiveness of Mathematics in the Natural Sciences (1960).

Kepler set out with a series of open questions about the nature of the cosmos as it was known during his lifetime. One of his questions was why are there six planets in the heliocentric system that he believed in and why did their orbits have the distances to each other that they have? At the time, on the basis of the known facts, perfectly reasonable questions. He, sort of, stumbled into his answer. Whilst discussing, with a school class, the long-term cycle of the conjunctions of Saturn and Jupiter he realised that the diagrammatic presentation of those conjunctions over time is a perfectly symmetrical geometrical diagram. 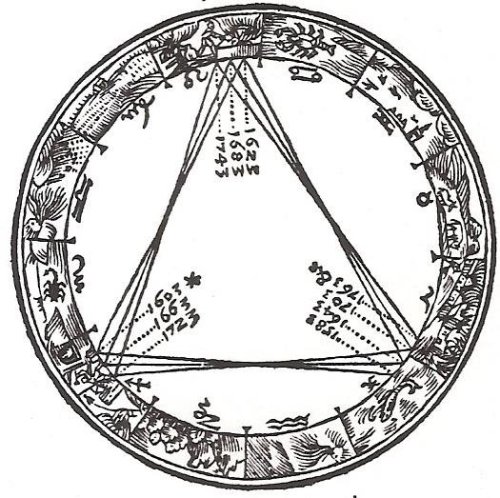 He wondered if the orbital distances of the planets also form some sort of symmetrical geometrical diagram. He tried various two-dimensional models without success then he his upon the three-dimensional, regular Euclidian solids. There are, and can only be, five of them, bingo! Six planets, five spaces, five Euclidian solids, do they fill out those spaces. Kepler positioned the five solids around and inside the spheres of the orbits of each pair of neighbouring planets and found they actually make a more than reasonable fit, not perfect but also not bad enough to immediately reject. He had the makings of a rational, geometrical construction plan for his cosmos. 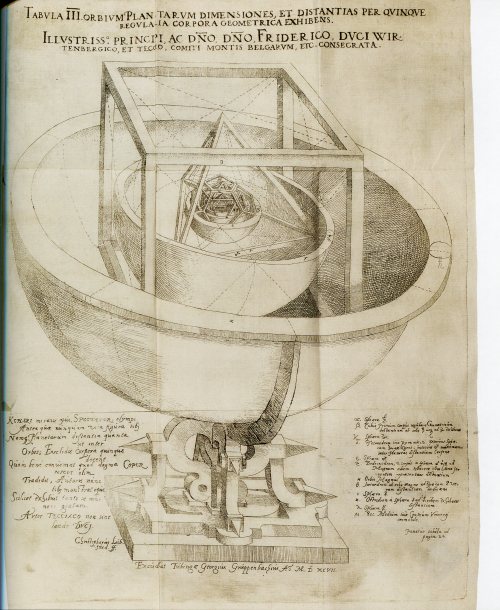 Kepler’s model was a good fit, but it wasn’t a perfect fit. In this situation the mediocre mathematical modeler simple accepts the imperfections, shrugs and moves on, but Kepler was not mediocre. In the situation, Kepler had two choices, he could abandon his model, or he could question his data. Kepler knew that the Ptolemaic/Copernican data he had inherited was inaccurate and corrupt, so he went in search of better data; a search that led him to Prague and working for Tycho Brahe, who had the best astronomical data available.

When Kepler finally got hold of some of Tycho’s data, it was to calculate the orbit of Mars that would eventually lead to his Astronomia nova. Kepler spent years trying to derive the most accurate orbit possible for Mars from Tycho’s data. His work was concentrated and precise and he developed several new approaches to orbit calculation in the process. At one point he had a circular orbit with just eight minutes of arc error in places; this was an amazing achievement in terms of the accepted levels of accuracy for the times, but it was neither accurate enough for Kepler’s personal standards, or in his opinion was it accurate enough to honour the accuracy of Tycho’s observations, so he worked further. As is well known he finally derived the correct elliptical orbit and with it his first two laws of planetary motion. The whole of this project was driven by Kepler’s desire to give accuracy to his Euclidian solids model.

In his Mysterium Cosmographicum Kepler had also floated the idea that his Euclidian solids model was fine-tuned by a second mathematical model the Pythagorean concept of celestial harmony. This is harmony in both its mathematical and musical meanings. This model said that the distances between the planetary orbits built a harmonious musical scale, the melody thus created only being audible to enlightened Pythagoreans. In choseing this particular approach Kepler was very much in tune with his times. The Pythagorean theory of celestial motion was very popular in the Middle Ages and in the Early Modern Perdiod Tycho Brahe designed and built his observatory Uraniborg entirely in Pythagorean harmonic proportions, 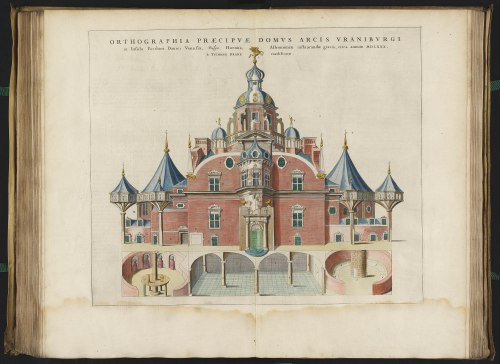 whereas Newton built the Pythagorean theory into his analysis of white light. Kepler would, once again, spend years of his life following this mathematical trail, publishing the results of his research in his magnum opus, Harmonices Mundi (1619). He had investigated the ratios between all possible position or velocities of the orbits of the planets; the most famous result being his harmony law, his third law of planetary motion:

Although the mathematical models that Kepler chose for his model of the cosmos are, from our point of view, more than somewhat bizarre, throughout his entire work, Kepler’s thinking was never even remotely a sea of wild, woolly thinking, just the opposite. Kepler’s thinking was always concentrated, exact, concise, logical, mathematical thinking, which consistently followed the chosen mathematical model of the subject of his research, the cosmos. His thinking contained no contradictions, imprecisions, deviations or internal errors. We might reject his heuristic, and in fact we do, but to dismiss it as wild and woolly, in the way that Kitty Ferguson and many other do, is to do Kepler a major injustice.

[1] Kitty Ferguson, Measuring the Universe: Our Historic Quest to Chart the Horizons of Space and Time, Walker & Company, 1999, p. 70