A book or many books?

If you count mathematics as one of the sciences, and I do, then without any doubt the most often reissued science textbook of all time has to be The Elements of Euclid. As B L van der Waerden wrote in his Encyclopaedia Britannica article on Euclid:

Almost from the time of its writing and lasting almost to the present, the Elements has exerted a continuous and major influence on human affairs. It was the primary source of geometric reasoning, theorems, and methods at least until the advent of non-Euclidean geometry in the 19th century. It is sometimes said that, next to the Bible, the “Elements” may be the most translated, published, and studied of all the books produced in the Western world.

The Elements have appeared in numerous editions from their inceptions, supposedly in the fourth century BCE down to the present day. In recent years, Kronecker-Wallis issued a new luxury edition of Oliver Byrne’s wonderful nineteenth century, colour coded version of the first six books of The Elements, extending it to all thirteen books.

There are far too many different editions of this fundamental geometry textbook to be able to name them all, but this automatically raises the question, are they all the same book? If we take a random example of a book with the title The Elements of Euclid, will we always find the same content between the covers? The simple answer to this question is no. The name of the author, Euclid, and the title of the book, The Elements, are much more a mantle into which, over a period of more than two thousand years, related but varying geometrical content has been poured to fit a particular time or function, never quite the same. Sometimes with minor variations sometimes major ones. The ever-changing nature of this model of mathematical literature is the subject of Benjamin Wardhaugh’s fascination volume, The Book of Wonder: The Many Lives of Euclid’s Elements.[1]

To write a detailed, complete, chronological history of The Elements, would probably produce something with the dimensions of James Frazer’s twelve volume The Golden Bough and Wardhaugh doesn’t attempt the task here. What he does do is to deliver a selective series of episodes out of the long and complex life of the book. These episodes rather than book chapters might best be described, as essays or even short stories. In total they sum up to a comprehensive, but by no means complete, overview of this fascinating mathematical tome. Wardhaugh’s essay collection is split up into four section, each of which takes a different approach to examining and presenting the history of Euclid’s opus magnum.

The first section opens with Euclid’s Alexandria, the geometry of the period and the man himself. It clearly shows how little we actually know about the origins of this extraordinary book and its purported author. The following essays deliver a sketch of the history of the book itself. We move from the earliest surviving fragments over the first known complete manuscript from Theon in the fourth century CE. We meet The Elements in Byzantium, in Arabic, in Latin and for the first time in print. 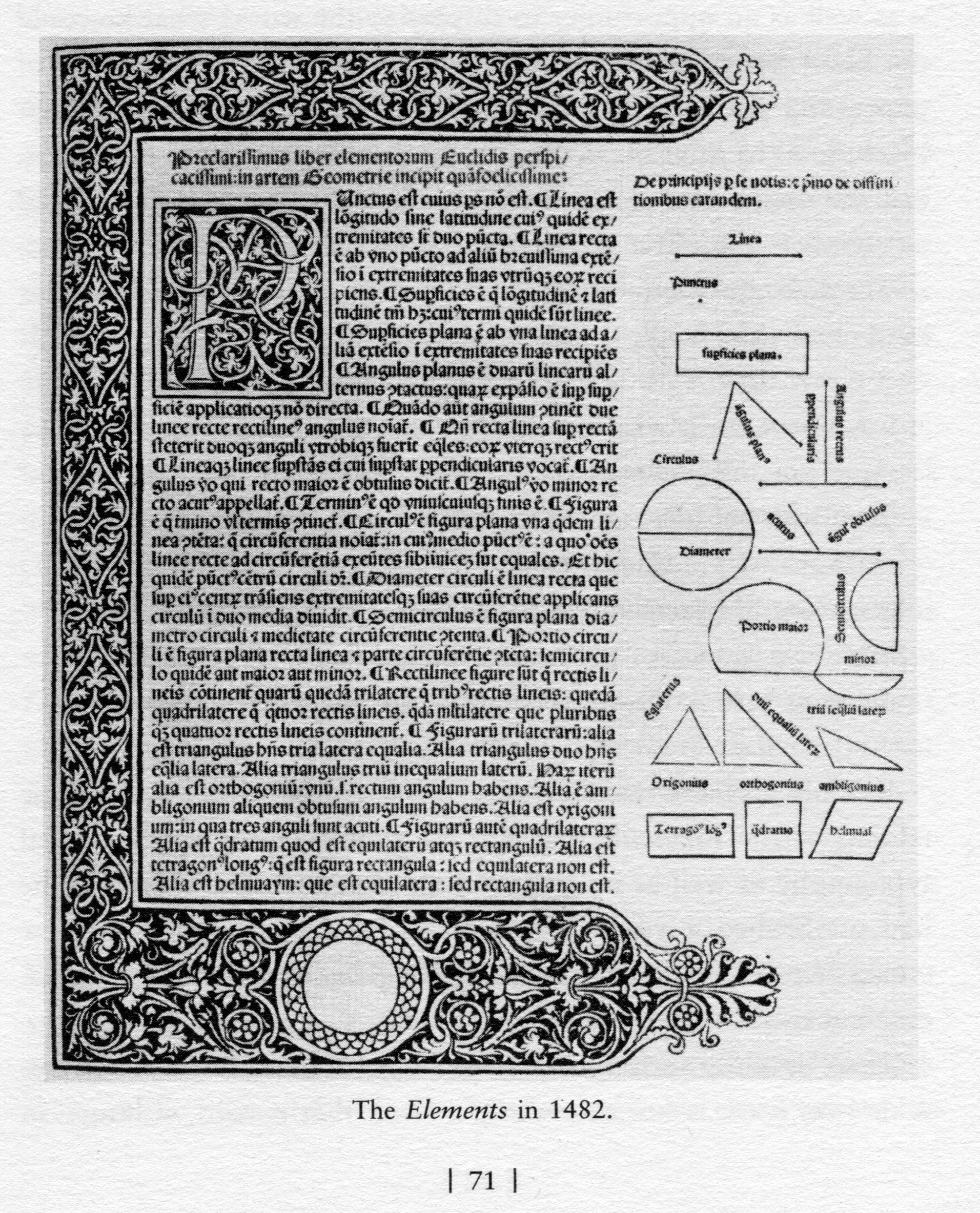 In the latter case I tripped over the only seriously questionable historical claim that I was aware of in the book. Wardhaugh repeats the nineteenth century claim that Erhard Ratdolt, the printer/publisher of that first printed edition, had been apprenticed to Regiomontanus. This claim is based on the fact that Ratdolt printed and published various manuscripts that had previously belonged to Regiomontanus, including the Euclid. However, there is absolutely no other evidence to support this claim. Regiomontanus was famous throughout Europe both as a mathematicus and as a printer/publisher, people were publishing books, which weren’t from him, more than one hundred years after his death, under his name. If Ratdolt had indeed learnt the printing trade from Regiomontanus he would, with certainty, have advertised the fact, he didn’t.

The first section closes with the flood of new editions that Ratdolt’s first printed edition unleashed in the Early Modern Period.

The second section deals with the various philosophical interpretations to which The Elements were subjected over the centuries. We start with Plato, who supposedly posted the phrase, “Let no man ignorant of geometry enter” over the entrance to his school. Up next is Proclus, whose fifth century CE commentary on The Elements was the first source that names Euclid as the author. We then have one of Wardhaugh’s strengths as a Euclid chronicler, in his book he digs out a series of women, who over the centuries have in some way engaged with The Elements; here we get the nun Hroswitha (d. c. 1000CE), whose play Sapientia included sections of Euclidian number theory. Following Levi ben Gershon and his Hebrew Euclid, we get a section that particularly appealed to me. First off Christoph Clavius’ Elements, possibly the most extensively rewritten version of the book and one of the most important seventeenth century maths textbooks. This is followed by the Chinese translation of the first six books of Clavius’ Elements by Matteo Ricci and Xu Guangqi. 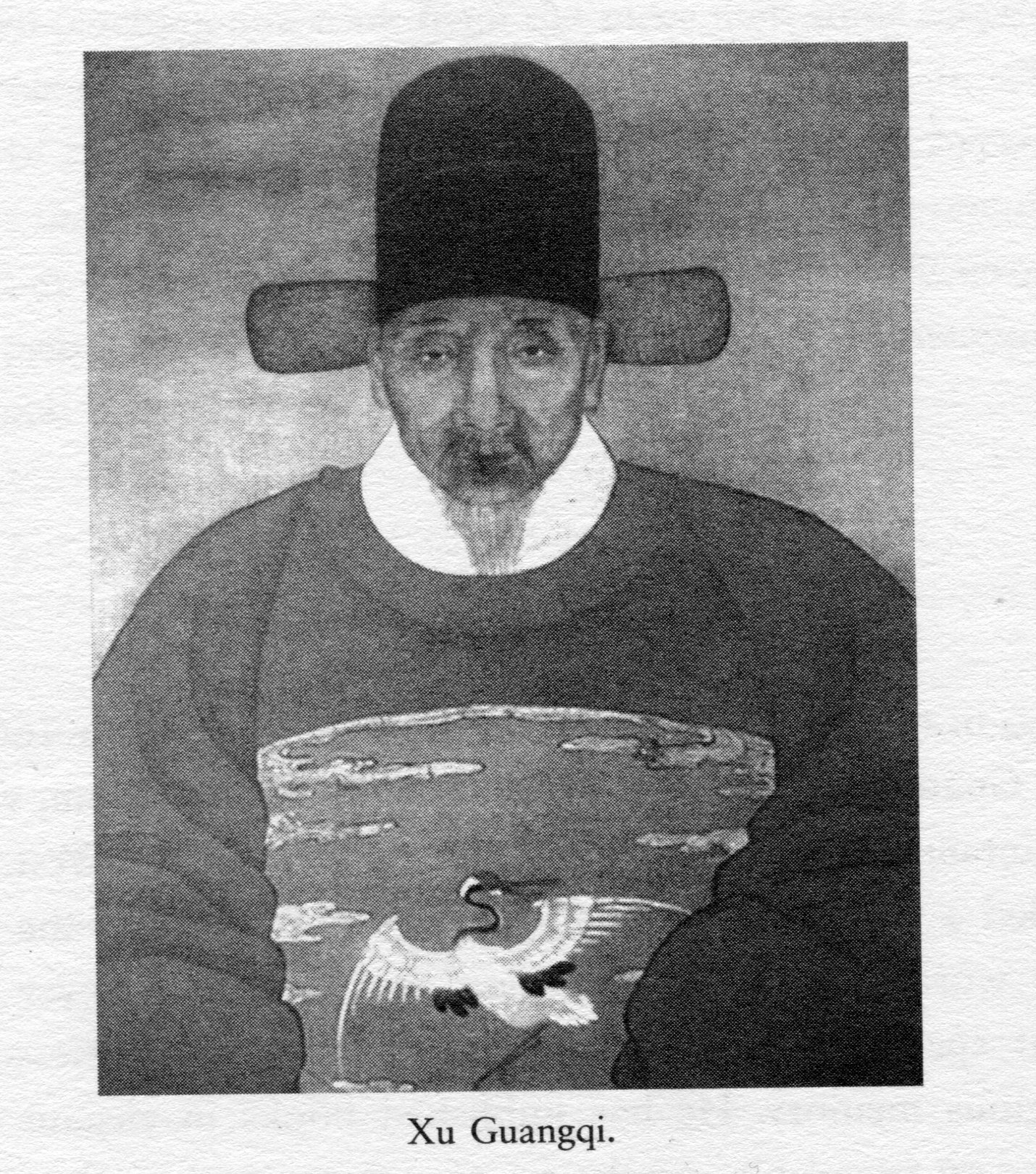 The second continues with an English stage play on geometry written for the carnival in Rome in 1635. Wardhaugh’s Euclidean research has dug very deep. Baruch Spinoza famously wrote a book on ethics in the style of Euclid’s Elements and of course it’s included here. The section closes with another woman, this time the nineteenth century landowner, Anne Lister.

The third section of the book deals with applied geometry. We start with ancient Egyptian surveyors, move onto music theory and the monochord, Roman field surveyors and the Arabic mathematician Muhammad abu al-Wafa al-Buzjani, who work on the theory of dividing up surfaces for the artisans to create those wonderful geometrical patterns so typical of Islamic ornamentation. Up next are medieval representations of the muse Geometria, which is followed by Piero della Francesca and the geometry of linear perspective. There is a brief interlude with the splendidly named seventeenth century maths teacher, Euclid Speidel before the section closes with Isaac Newton.

The fourth section of the book traces the decline of The Elements as a textbook in the nineteenth century. We start with another woman, Mary Fairfax, later Mary Sommerville, and her battles with her parents to be allowed to read Euclid. We travel to France and François Peyrard’s attempts to create, as far as possible, a new definitive text for the Elements. Of course, Nicolai Ivanovich Lobachevsky and the beginnings of non-Euclidian geometry have to put in an appearance. Up next George Eliot’s The Mill on the Floss is brought in to illustrate the stupefying nature of Euclidian geometry teaching in English schools in the nineteenth century. We move on to teaching Euclid in Urdu in Uttar Pradesh. A survey of the decline of Euclid in the nineteenth century would no be complete without Lewis Carroll’s wonderful drama Euclid and his Modern Rivals. Carroll is followed by, in his time, one of the greatest historians of Greek mathematics, Thomas Little Heath, whose superb three volume English edition of The Elements has graced my bookshelf for several decades. 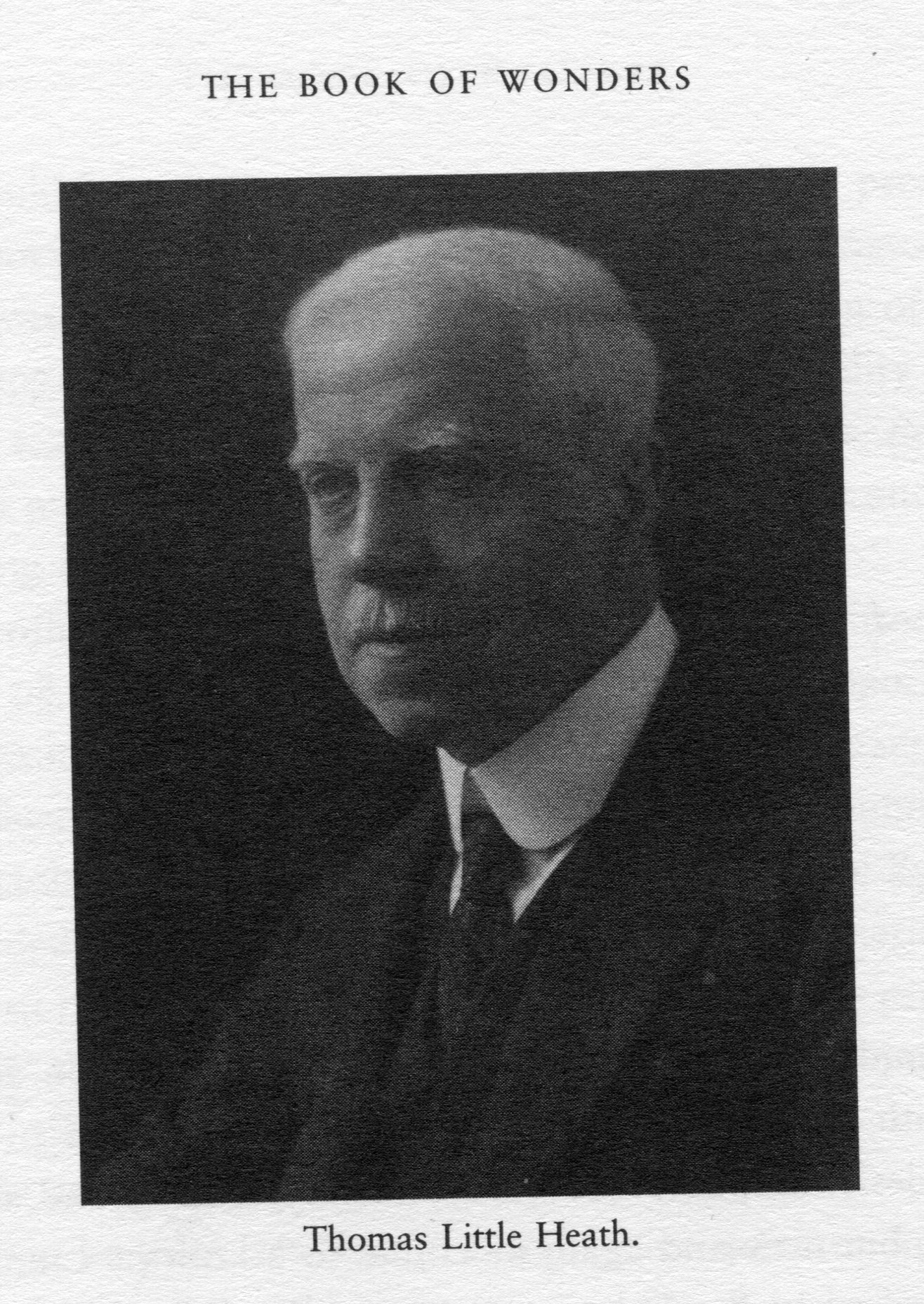 The book closes with an excursion into the arts. Max Ernst’s Euclid’s Mask morphs into a chapter on Euclidean design, including Oliver Byrne’s colour coded Elements, mentioned earlier. The final chapter is some musing on the iconic status of Euclid and his book.

There are no foot or endnotes and the book contains something that I regard as rather inadequate. Notes on Sources, which for every chapter gives a short partially annotated reading list. Not, in my opinion the most helpful of tools. There is an extensive bibliography and a good index. The book is illustrated with the now standard grey in grey prints.

Benjamin Wardhaugh is an excellent storyteller and his collected short story approach to the history of The Elements works splendidly. He traces a series of paths through the highways and byways of the history of this extraordinary mathematics book that is simultaneously educational, entertaining and illuminating. In my opinion a highly desirable read for all those, both professional and amateur, who interest themselves for the histories of mathematics, science and knowledge or the course of mostly European intellectual history over almost two and a half millennia.

[1] Benjamin Wardhaugh, The Book of Wonder: The Many Lives of Euclid’s Elements, William Collins, London, 2020

8 responses to “A book or many books?”