The emergence of modern astronomy – a complex mosaic: Part XXVIII

One of the central problems in the transition from the traditional geocentric astronomy/cosmology to a heliocentric one was that the system that the Early Modern astronomers inherited from their medieval predecessors was not just an uneasy amalgam of Aristotelian cosmology and Ptolemaic astronomy but it also included Aristotle’s (384–322 BCE) theories of terrestrial and celestial motion all tied together in a complete package. Aristotle’s theory of motion was part of his more general theory of change and differentiated between natural motion and unnatural or violent motion.

The celestial realm in Aristotle’s cosmology was immutable, unchanging, and the only form of motion was natural motion that consisted of uniform, circular motion; a theory that he inherited from Plato (c. 425 – c.347 BCE), who in turn had adopted it from Empedocles (c. 494–c. 434 BCE).

His theory of terrestrial motion had both natural and unnatural motion. Natural motion was perpendicular to the Earth’s surface, i.e. when something falls to the ground. Aristotle explained this as a form of attraction, the falling object returning to its natural place. Aristotle also claimed that the elapsed time of a falling body was inversely proportional to its weight. That is, the heavier an object the faster it falls. All other forms of motion were unnatural. Aristotle believed that things only moved when something moved them, people pushing things, draught animals pulling things. As soon as the pushing or pulling ceased so did the motion.  This produced a major problem in Aristotle’s theory when it came to projectiles. According to his theory when a stone left the throwers hand or the arrow the bowstring they should automatically fall to the ground but of course they don’t. Aristotle explained this apparent contradiction away by saying that the projectile parted the air through which it travelled, which moved round behind the projectile and pushed it further. It didn’t need a philosopher to note the weakness of this more than somewhat ad hoc theory.

If one took away Aristotle’s cosmology and Ptolemaeus’ astronomy from the complete package then one also had to supply new theories of celestial and terrestrial motion to replace those of Aristotle. This constituted a large part of the development of the new physics that took place during the so-called scientific revolution. In what follows we will trace the development of a new theory, or better-said theories, of terrestrial motion that actually began in late antiquity and proceeded all the way up to Isaac Newton’s (1642–1726) masterpiece Principia Mathematica in 1687.

The first person to challenge Aristotle’s theories of terrestrial motion was John Philoponus (c. 490–c. 570 CE). He rejected Aristotle’s theory of projectile motion and introduced the theory of impetus to replace it. In the impetus theory the projector imparts impetus to the projected object, which is used up during its flight and when the impetus is exhausted the projectile falls to the ground. As we will see this theory was passed on down to the seventeenth century. Philoponus also rejected Aristotle’s quantitative theory of falling bodies by apparently carrying out the simple experiment usually attributed erroneously to Galileo, dropping two objects of different weights simultaneously from the same height:

but this [view of Aristotle] is completely erroneous, and our view may be completely corroborated by actual observation more effectively than by any sort of verbal argument. For if you let fall from the same height two weights, one many times heavier than the other you will see that the ratio of the times required for the motion does not depend [solely] on the weights, but that the difference in time is very small. …

Philoponus also removed Aristotle’s distinction between celestial and terrestrial motion in that he attributed impetus to the motion of the planets. However, it was mainly his terrestrial theory of impetus that was picked up by his successors.

Nur ad-Din al-Bitruji (died c. 1204) elaborated it at the end of the twelfth century. Like Philoponus, al-Bitruji thought that impetus played a role in the motion of the planets. 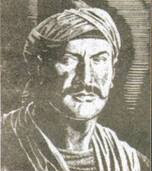 Brought into European thought during the scientific Renaissance of the twelfth and thirteenth centuries by the translators it was developed by Jean Buridan  (c. 1301–c. 1360), who gave it the name impetus in the fourteenth century:

When a mover sets a body in motion he implants into it a certain impetus, that is, a certain force enabling a body to move in the direction in which the mover starts it, be it upwards, downwards, sidewards, or in a circle. The implanted impetus increases in the same ratio as the velocity. It is because of this impetus that a stone moves on after the thrower has ceased moving it. But because of the resistance of the air (and also because of the gravity of the stone) which strives to move it in the opposite direction to the motion caused by the impetus, the latter will weaken all the time. Therefore the motion of the stone will be gradually slower, and finally the impetus is so diminished or destroyed that the gravity of the stone prevails and moves the stone towards its natural place. In my opinion one can accept this explanation because the other explanations prove to be false whereas all phenomena agree with this one.

In the sixteenth century the self taught Italian mathematician Niccolò Fontana (c. 1500–1557), better known by his nickname, Tartaglia, who is best known for his dispute with Cardanoover the general solution of the cubic equation.

published the first mathematical analysis of ballistics his, Nova scientia (1537).

His theory of projectile trajectories was wrong because he was still using the impetus theory. 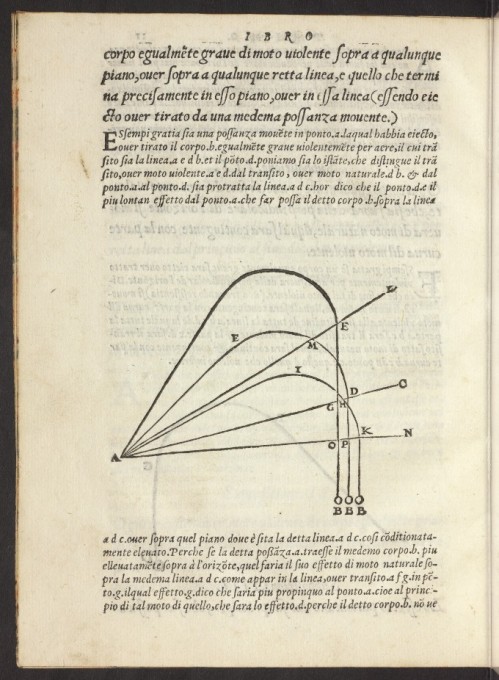 However, he was the first to demonstrate that an angle of 45° for a canon gives the widest range.

His book was massively influential in the sixteenth century and it also influenced Galileo, who owned a heavily annotated copy of the book.

We have traced the path of the impetus theory from its inception by John Philoponus up to the second half of the sixteenth century. Unlike the impetus theory Philoponus’ criticism of Aristotle’s theory of falling bodies was not taken up directly by his successors. However, in the High Middle Ages Aristotelian scholars in Europe did begin to challenge and question exactly those theories and we shall be looking at that development in the next section.