In popular presentations of the so-called scientific or astronomical revolutions Galileo Galilei is almost always presented as the great champion of heliocentricity in the first third of the seventeenth century. In fact, as we shall see, his contribution was considerably smaller than is usually claimed and mostly had a negative rather than a positive influence. The real champion of heliocentricity in this period was Johannes Kepler, who in the decade between 1617 and 1627 published four major works that laid the foundations for the eventual triumph of heliocentricity over its rivals. I have already dealt with one of these in the previous post in this series, the De cometis libelli tres I. astronomicus, theoremata continens de motu cometarum … II. physicus, continens physiologiam cometarum novam … III. astrologicus, de significationibus cometarum annorum 1607 et 1618 / autore Iohanne Keplero …, which was published in 1619 and as I’ve already said became the most important reference text on comets in the 1680’s during a period of high comet activity that we will deal with in a later post.

Chronologically the first of Kepler’s influential books from this decade was Volume I (books I–III) of his Epitome Astronomiae Copernicanae published in 1617, Volume II (book IV) followed in 1620 and Volume III (books V–VII) in 1621. This was a text book on heliocentric astronomy written in question and answer dialogue form between a teacher and a student spelling out the whole of heliocentric astronomy and cosmology in comparatively straight forward and simple terms, the first such textbook. There was a second edition containing all three volumes in 1635.

This book was highly influential in the decades following its publication and although it claims to be a digest of Copernican astronomy, it in fact presents Kepler’s own elliptical astronomy. For the first time his, now legendary, three laws of planetary motion are presented as such together. As we saw earlier the first two laws–I. The orbit of a planet is an ellipse and the Sun is at one of the focal points of that ellipse II: A line connecting the Sun and the planet sweeps out equal areas in equal times–were published in his Astronomia Nova in 1609. The third law was new first appearing in, what he considered to be his opus magnum, Ioannis Keppleri Harmonices mundi libri V (The Five Books of Johannes Kepler’s The Harmony of the World) published in 1619 and to which we now turn our attention.

Kepler’s first book was his Mysterium Cosmographicum published in 1597 with its, to our way of thinking, somewhat bizarre hypothesis that there are only six planets because the spaces between their orbits are defined by the five regular Platonic solids. 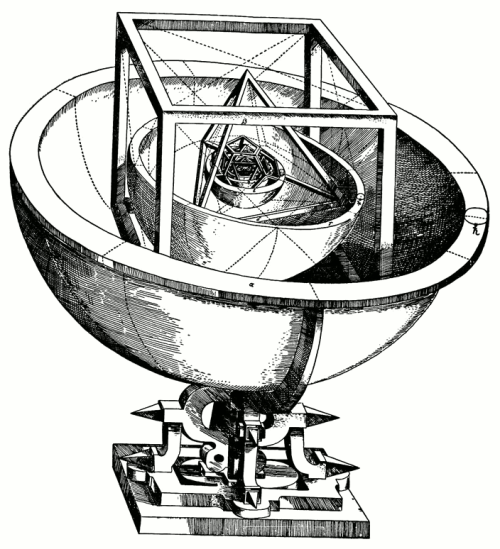 Although his calculation in 1597 showed a fairly good geometrical fit for his theory, it was to Kepler’s mind not good enough and this was his motivation for acquiring Tycho Brahe’s newly won more accurate data for the planetary orbits. He believed he could quite literally fine tune his model using the Pythagorean theory of the harmony of the spheres, that is that the ratio of the planetary orbits build a musical scale that is only discernable to the enlightened Pythagorean astronomer. The Harmonices Mundi was that fine tuning.

The first two books of the Harmonices Mundi layout Kepler’s geometrical theory of music, which geometrical constructions produced harmonious musical intervals and which disharmonious ones, based on which are constructible with straight edge and compass, harmonious, and which are not, disharmonious. The third book is Kepler’s contribution to the contemporary debate on the correct division of the intervals of the musical scale, in which Vincenzo Galilei (1520–1591), Galileo’s father, had played a leading role. The fourth book is the application of the whole to astrology and the fifth its application to astronomy and it is here that we find the third law.

In the fifth Kepler compare all possible ratios of planetary speeds and distances constructing musical scales for planets and musical intervals for the relationship between planets. It is here that he, one could say, stumbles upon his third law, which is known as the harmony law. Kepler was very much aware of the importance of his discovery as he tells us in his own words:

“After I had discovered true intervals of the orbits by ceaseless labour over a very long time and with the help of Brahe’s observations, finally the true proportion of the orbits showed itself to me. On the 8th of March of this year 1618, if exact information about the time is desired, it appeared in my head. But I was unlucky when I inserted it into the calculation, and rejected it as false. Finally, on May 15, it came again and with a new onset conquered the darkness of my mind, whereat there followed such an excellent agreement between my seventeen years of work at the Tychonic observations and my present deliberation that I at first believed that I had dreamed and assumed the sought for in the supporting proofs. But it is entirely certain and exact that the proportion between the periodic times of any two planets is precisely one and a half times the proportion of the mean distances.”

Translated into modern notation the third law is P12/P22=R13/R23, where P is the period of a planet and R is the mean radius of its orbit. It can be argues that this was Kepler’s greatest contribution to the history of the emergence of heliocentricity but rather strangely nobody really noticed its true significance until Newton came along at the end of the seventeenth century.

However they should have done because the third law gives us is a direct mathematical relationship between the size of the orbits of the planets and their duration, which only works in a heliocentric system. There is nothing comparable for either a full geocentric system or for a geo-heliocentric Tychonic or semi-Tychonic system. It should have hit the early seventeenth-century astronomical community like a bomb but it didn’t, which raises the question why it didn’t. The answer is because it is buried in an enormous pile of irrelevance in the Harmonices Mundi and when Kepler repeated it in the Epitome he gave it no real emphasis, so it remained relatively ignored.

On a side note, it is often thought that Kepler had abandoned his comparatively baroque Platonic solids concepts from the Mysterium Cosmographicum but now that he had, in his opinion, ratified it in the Harmonices Mundi he published a second edition of the book in 1621.

Ironically the book of Kepler’s that really carried the day for heliocentricity against the geocentric and geo-heliocentric systems was his book of planetary tables based on Tycho Brahe’s data the Tabulae Rudolphinae (Rudolphine Tables) published in 1627, twenty-eight years after he first began working on them. Kepler had in fact been appointed directly by Rudolph II in Prague to produce these tables at the suggestion of Tycho in 1601. Turning Tycho’s vast collection of data into accurately calculated tables was a horrendous and tedious task and over the years Kepler complained often and bitterly about this burden. 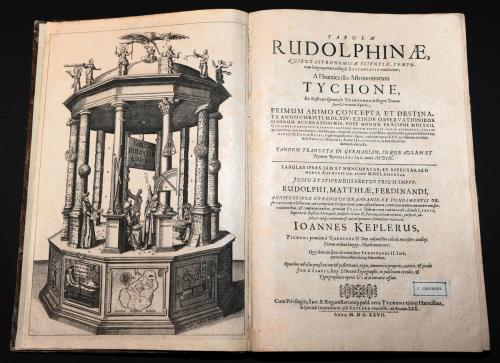 However, he persevered and towards the end of the 1620s he was so far. Because he was the Imperial Mathematicus and had prepared the tables under the orders of the Emperor he tried to get the funds to cover the printing costs from the imperial treasury. This proved to be very difficult and after major struggles he managed to acquire 2000 florins of the more than 6000 that the Emperor owed him, enough to pay for the paper. He began printing in Linz but in the turmoil of the Thirty Years War the printing workshop got burnt down and he lost the already printed pages. Kepler decamped to Ulm, where with more difficulties he succeeded in finishing the first edition of 1000 copies. Although these were theoretically the property of the Emperor, Kepler took them to the Frankfurt book fair where he sold the entire edition to recoup his costs.

The Tabulae Rudolphinae were pretty much an instant hit. The principle function of astronomy since its beginnings in Babylon had always been to produce accurate tables and ephemerides for use initially by astrologers and then with time also cartographers, navigators etc. Astronomical systems and the astronomers, who created them, were judged on the quality and accuracy of their tables. Kepler’s Tabulae Rudolphinae based on Tycho’s data were of a level of accuracy previous unknown and thus immediately won many supporters. Those who used the tables assumed that their accuracies was due to Kepler’s elliptical planetary models leading to a gradually increasing acceptance of heliocentricity but this was Kepler’s system and not Copernicus’. Supported by the Epitome with the three laws of planetary motion Kepler’s version of heliocentricity became the dominant astronomical/cosmological system over the next decades but it would be another thirty to forty years, long after Kepler’s death, before it became the fully accepted system amongst astronomers.