The emergence of modern astronomy – a complex mosaic: Part XVIII

Along with Copernicus, Galileo and Newton, Kepler is one of the historical icons of the heliocentricity story. I personally think he is the most important figure of them all but in the public perception he is the least well known of the major figures and the least acknowledged. It is often said that we live in a Copernican cosmos or universe but in fact it would be much more accurate to state that we live in a Keplerian cosmos. So who was this man and what did he contribute to the evolution of the heliocentric hypothesis and its acceptance?

Johannes Kepler (1571–1633) was born in the small town of Weil der Stadt, a Free Imperial City within the Duchy of Württemberg, the son of Heinrich Kepler, an innkeeper and sometime mercenary, and his wife Katharina Guldenmann, the daughter of an innkeeper. 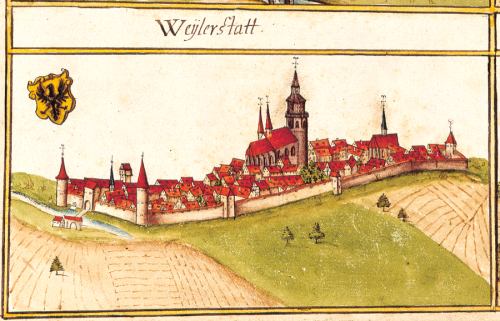 Kepler’s father disappeared when he was just five years old, not the most auspicious start in life. The young Kepler grew up in his grandfather’s inn. According to Kepler in one of his autobiographical sketches it was his mother, who first awakened his interest in astronomy. She took him outside in the night to view the Great Comet of 1577 and again in 1580 to view a lunar eclipse.

The Great comet of 1577, seen over Prague on November 12. Engraving made by Jiri Daschitzky. Source: W§Wikimedia Commons

Kepler must have been an intelligent child because he received a grant from the Duchy of Württemberg to study first at the convent-school, Adelberg, in 1584 then at the seminary at Maulbronn in 1586 he graduated BA at the University of Tübingen in 1588 but returned to Maulbronn for another year. In 1589 he entered the Tübinger Stift, the hall of residence of the Lutheran Protestant Church at the University of Tübingen. Kepler’s grant was part of scheme to train Lutheran pastors and schoolteachers to replace the Catholic ones lost through Württemberg becoming Protestant. He graduated MA in 1591.

It is a widespread myth that Kepler now studied theology but in fact he remained at the university receiving instruction in the various practical aspects of his potential future career, teaching practice, basic theology for sermons and so forth until a suitable vacancy became available. Kepler, who was deeply religious, desired to become a pastor, however, when a vacancy for a maths teacher in Graz became available he was recommended for the post and after some hesitation he accepted reluctantly his new position, which included the post of district mathematicus and beginning in 1594.

During his studies in Tübingen he came under the influence of Michael Mästlin and was one of those, who received an introduction to Copernicus’ heliocentric hypothesis, which he immediately adopted with enthusiasm. He succeeded in acquiring a second hand copy of the first edition De revolutionibus in 1598–the book was by now 55 years old–which is still extant.

Kepler was still very miffed about the fact that he was teaching teenagers mathematics rather than serving his God as a pastor when he had what could be best described as an epiphany whilst teaching astronomy to a class on 19 July 1595. At the time Kepler was trying to find a conclusive argument as to why there are only six planets thus supporting a heliocentric model against a geocentric one that has seven planets. During his teaching he drew a diagram illustrating the cyclical pattern of the occurrences of the so-called Great Conjunctions of Saturn and Jupiter, something considered very important in astrology. 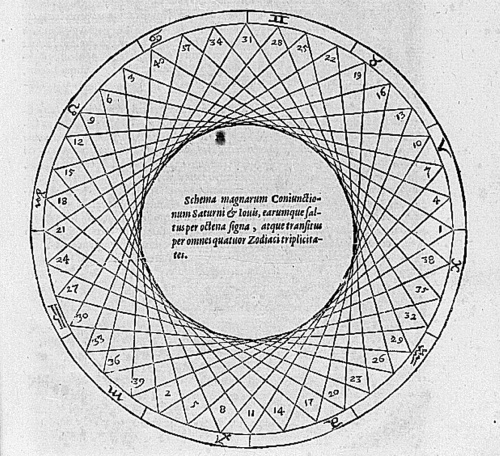 Kepler’s diagram of the Great Conjuctions of Saturn and Jupiter

Viewing his own diagram he had a revelation and thought, the orbits of the planets are separated by geometrical figures! Initially he tried various regular polygons but couldn’t get a good fit between his figures and the known distances between the planetary orbits. His next thought was that space in naturally three-dimensional and the polygons are only two-dimensional, also there are infinitely many regular polygons so not a good potential argument for a specific limited number of planets. He now turned to polyhedra; then he had his second aha moment. There are only five regular Euclidian polyhedra, so the each of the five paths between the six planets was defined by one of these:

If, for the sizes for the relations of the six heavenly paths assumed by Copernicus, five figures possessing certain distinguishing characteristics could be discovered among the remaining infinitely many, then everything would go as desired.

This astronomical epiphany led Kepler to the realisation that his God was a geometer and his call was to worship his God by revealing the geometrical structure of creation. His desire to become a pastor died and Johannes Kepler the astronomer was born.

He quickly turned his revelation into what became the first of his many books his Prodromus dissertationum cosmographicarum, continens mysterium cosmographicum, de admirabili proportione orbium coelestium, de que causis coelorum numeri, magnitudinis, motuumque periodicorum genuinis & proprijs, demonstratum, per quinque regularia corpora geometrica (Forerunner of the Cosmological Essays, Which Contains the Secret of the Universe; on the Marvelous Proportion of the Celestial Spheres, and on the True and Particular Causes of the Number, Magnitude, and Periodic Motions of the Heavens; Established by Means of the Five Regular Geometric Solids), usually known simply as the Mysterium Cosmographicum (the Cosmographic Mystery).

The fit between the Euclidian regular solids and the planetary orbits turned out to be fairly good with less that 10% error. Kepler would dedicate much of his later life to trying to eliminate that error through various strategies.

Supported by Mästlin, Kepler obtained permission from the University of Tübingen to publish this book, although the university insisted on removing some theological passages from the manuscript. Any doubts about Mästlin’s commitment to heliocentricity were removed by the publication of this book in 1596, which contains an introduction on the Copernican system written by Mästlin and his addition of Rheticus’ Narratio Prima to the book, as an appendix.

At this point in his life Kepler was a twenty-five year old schoolteacher in the Austrian provinces without any sort of reputation. To try and acquire some recognition he sent complimentary copies of his freshly printed tome to various notable European astronomers. As we shall see two of those complimentary copies played a significant roll in his future life, one of them causing him immense embarrassment the other setting him up for his future as a leading astronomer.

However, before we go down that path, there is a widespread myth that Kepler sent a copy of the Mysterium Cosmographicum to Galileo in Padua. At this point in his life Galileo was almost as unknown as Kepler and Kepler had certainly never heard of him. In fact Galileo did receive two copies of Kepler’s first book entirely by chance (you can read the full story here) and wrote a brief letter thanking the author. This letter was Galileo’s earliest known written commitment to the Copernican heliocentric hypothesis.

The two fateful copies that Kepler sent out were to Nicolaus Reimers Baer (1551–1600), known as Ursus, who was at the time Imperial Mathematicus on the court of Rudolf II in Prague and to Tycho Brahe (1546­–1601), Europe’s leading observational astronomer on his island of Hven. Kepler was unaware that the two recipients of his first efforts were at the time involved in a very public slanging match about who invented the geo-heliocentric system and whether Ursus has plagiarised it from Tycho. In fairly typical Renaissance manner Kepler had in his accompanying letter to Ursus addressed the Imperial Mathematicus in fawning heaps of praise of his abilities and achievements. Unknown to Kepler, Ursus then quoted that praise in one of his publications bitterly attacking Tycho. The result was that Kepler was in Tycho’s bad books long before he ever met him.

Graz is the capital of Styria in Austria an area that at the end of the sixteenth century was deeply Catholic with only a comparatively small Protestant minority. The Counter Reformation was in full swing and all of the Protestants were ordered to leave the province. Kepler was exempted from the ban on Protestant due to his successful astrological prognostica, part of his obligations as district mathematicus. However, as religious tensions rose the remaining Protestants were banned from the province and this time Kepler received no exemption. Now married and with children Kepler desperately needed a new position. He wrote to Mästlin in Tübingen but his one time mentor now refused to assist him in anyway. In the end he applied to Tycho, now installed in Prague as Imperial Mathematicus, for a position, any position. Due to the vagaries of the sixteenth century post system Kepler had not yet received any reply from Tycho when he set off in 1600 to Prague hoping to find a solution to his seemingly impossible situation but blissfully unaware that Tycho had a serious bone to pick with him. He also hoped to gain access to Tycho’s observational data, the most accurate available and several levels more accurate than the data Kepler had had available when he wrote his Mysterium Cosmographicum. With Tycho’s data he was convinced he would be able to remove that error in his model of the cosmos.

One response to “The emergence of modern astronomy – a complex mosaic: Part XVIII”