The emergence of modern astronomy – a complex mosaic: Part X

The publication in the spring of 1543 Copernicus’ De revolutionibus orbium coelestium (On the Revolutions of the Heavenly Spheres) had been widely advertised in advance by his own Commentariolus, distributed in manuscript from about 1510 and Rheticus’ De libris revolutionum Copernici narratio prima (1stedition Danzig 1540 and 2ndedition Basel 1541), so there was a certain level of anticipation to finally be able to view the mathematical models on which Copernicus had based his heliocentric hypothesis. The interest was particularly great as this was the first major, extensive work of mathematical astronomy since Ptolemaeus’ Syntaxis Mathematiké was published in the middle of the second century CE. The inaccuracy of the tables and ephemerides based on Ptolemaeus’ work had been grounds for concern amongst astronomers and astrologers for several centuries by the time Copernicus’ magnum opus appeared. So what did the eager reader get for his money when he finally got De revolutionibus in his hands?

De revolutionibus is closely modelled on Ptolemaeus’ Syntaxis Mathematiké or more accurately, as is clear from internal textual evidence, Peuerbach’s and Regiomontanus’ Epytoma in almagesti Ptolemei, which together with Peuerbach’s Theoricarum novarum planetarum had been the book from which Copernicus had learnt his astronomy. However unlike the Syntaxis Mathematiké and the Epytoma, which both have thirteen books, De revolutionibus only has six books.

These six books are preceded by a title page and three separate documents. As well as the title, the title page contains the following message, which almost certainly stems from the publisher, Johannes Petreius, rather than from Copernicus: 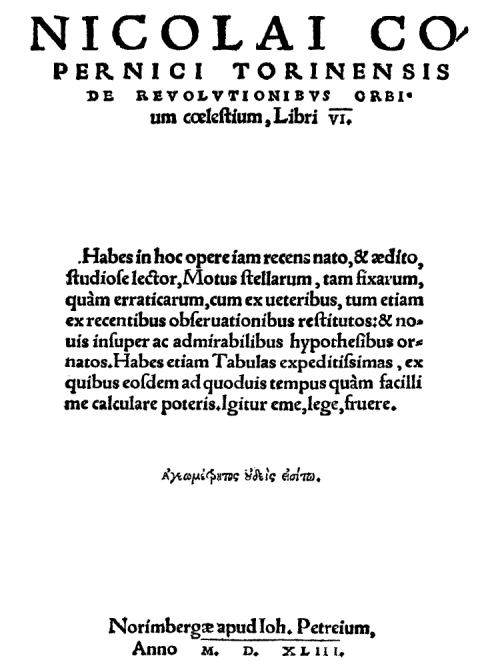 Diligent reader, in this work, which has just been created and published, you have the motion of the fixed stars and planets, as these motions have been reconstituted on the basis of ancient as well as recent observations, and have been moreover been embellished by new and marvellous hypotheses. You also have most convenient tables, from which you will be able to compute those motions with the utmost ease for any time whatever. Therefor buy, read, enjoy.[1]

This is followed by the motto, in Greek, that supposedly graced the gates of Plato’s Academy:

Let no one untrained in geometry enter here

The first opening document is the Ad lectorum added by Andreas Osiander that I dealt with in Part IX. The second is a letter that Copernicus received from Nicolas Schönberg, Cardinal of Capua, in 1536 urging him to make his new cosmology public. Publishing this display of support by a leading Church official, Schönberg was secretary to the pope, was obviously intended to deflect any potential theological objections to his work. This is very obviously also the intention of the third document, the book’s preface, a dedication to His Holiness, Pope Paul III. In this preface Copernicus defends and justifies his heterodox cosmological hypothesis. The strongest statement coming shortly before the conclusion:

Perhaps there will be babblers who claim to be judges of astronomy although completely ignorant of the subject and, badly distorting some passages of Scripture to their purpose, will dare to find fault with my undertaking and censure it. I disregard them even to the extent of despising their criticism as unfounded. For it is not unknown that Lactantius, otherwise an illustrious writer but hardly an astronomer, speaks quite childishly about the earth’s shape, when he mocks those who declared that the earth has the form of a globe. Hence scholars need not be surprised if any such person will likewise ridicule me. Astronomy is written for astronomers.

(The Latin text of the final phrase is Mathemata mathematicis scribuntur, which is often translated as mathematics is written for mathematicians, but I think Rosen is right to translate it as astronomy and astronomers because in the Renaissance the terms mathematicus, astronomicus and astrologus are actually synonyms.)

With his “astronomy is written for astronomers” Copernicus a stridently telling potential readers I will only accept criticism from people who know what they are talking about. Copernicus citing Lactantius, as an ignorant critic has a certain historical irony. Lactantius a notorious flatearther had been almost entirely forgotten and committed to the trashcan of history but was brought back into circulation by Copernicus’ citation.

The first eleven chapters of Book I give a general overview of Copernicus’ heliocentric hypothesis and present his cosmology. Here Copernicus makes very clear his strict adherence to the ancient Greek axiom that the motion of celestial bodies is uniform circular motion, which would prove to be the biggest drawback of his entire system and eventually lead to its downfall. Chapter twelve deals with the maths of cords of circles, chapter thirteen the trigonometry of plain triangles and chapter fourteen spherical trigonometry. These chapters constitute the section of the book that Rheticus had published in advance in Copernicus’ name De lateribus et angulis triangulorum (On the Sides and Angles of Triangles), which appeared in 1542.

Book II of De revolutionibus deals with the principles of spherical astronomy and closes with a catalogue of the fixed stars, which is largely Ptolemaeus’ star catalogue. Book III is devoted to the Sun, Book IV to the moon and Books V & VI deal with the motion of the planets in a heliocentric system.

De revolutionibus is a weighty, mathematical tome running to 330 large format pages in Edward Rosen’s English translation and definitely not for the casual reader or the faint of heart. Some historians have claimed that it was a bad seller and compare its publication figures with Christoph Clavius’ commentary on the Sphere of Sacrobosco, In Sphaeram Ioannis de Sacro Bosco commentaries, which went through numerous editions in the late sixteenth and early seventeenth centuries. This is an unfair comparison. Clavius’ volume is a university textbook on the basics of geocentric astronomy written for undergraduates. De revolutionibus is an advanced mathematical text written, as Copernicus said, for working astronomers. There were only a fairly small number of scholars in Europe in the second half of the sixteenth century, who possessed the necessary knowledge and level of mathematical skill to read and understand it. In the sixteenth century there were only two editions, the first in Nürnberg in 1543 and the second unchanged edition in Basel in 1566 published by Petreius’ cousin Heinric Petri. Each edition has been estimated to have been around five hundred copies.

Owen Gingerich carried out a detailed survey over many years of all the known surviving copies of both the first and second editions and it is clear that every notable mathematician/astronomer in Europe in the second half of the sixteenth century possessed a copy of De revolutionibus. Gingerich also surveyed the marginalia in all the surviving copies and one general result was that nearly all the readers ignored the first, heliocentric cosmological Book, confining themselves to the mathematical models in the other five books. We will be looking somewhat more closely at the reception history of Copernicus’ magnum opus in the next part of this series.

[1]All English quotes from De revolutionibus are taken from On the Revolutions, translated and commentary by Edward Rosen, Johns Hopkins University Press, Baltimore and London, ppb. 1992

3 responses to “The emergence of modern astronomy – a complex mosaic: Part X”