Matthew Flinders and the naming of Australia

The media, in particular the UK media, has gone into feeding frenzy mode about the discovery of the grave of the eighteenth century English seaman Matthew Flinders (1774–1814), during excavation near Euston station in London for the construction of the highly controversial HS2 railway link. Flinders was the first European to circumnavigate Australia; a feat he only managed thanks to the services of a native Australian, Bungaree (1775-1830) of the Kuringgai people. The use of local guides and navigators was common practice by European explorers, both Vasco da Gama and James cook did it, a fact too often ignored by other Europeans writing about their achievements.

Nearly all the social media reports that I have seen also give Flinders credit for having given Australia its name; this is quite simply wrong. The Latin name Terra Australis comes from the Latin auster for southern wind so literally Land of the Southern Wind. It comes from the ancient Greek cosmographers. For the Greeks their world was the oikoumenikos that is the Euro-Asian landmass with part of North Africa. As the Earth was a sphere in order to balance it, so to speak, they hypothesised an equally large southern landmass, which became in Latin Terra Australis, which one can also translate as the southern continent. Nobody knew where it was or even if it existed but the concept became a fixed feature of European culture.

Later European cartographers would often place it somewhere in the southern hemisphere. On his 1515 terrestrial globe, the first to name the newly discovered fourth part of the world America, Johannes Schöner placed it below the southern tip of the newly discovered continent leading some to speculate that he knew of the existence on the Straights of Magellan several years before they were discovered by the Portuguese.

When Flinders circumnavigated Australia the landmass was mostly known to Europeans as New Holland, the Dutch being the first Europeans to discover it. Flinders was not even the first to suggest naming it Australia. That honour appears to go to Alexander Dalrymple (1737–1808) in his 1771 book Historical Collection of the Several Voyages and Discoveries in the South Pacific Ocean, a book that Flinders knew. The name Australia was also used in 1793 by the botanists George Shaw (1751–1813) and James Smith (1759–1828) in their book Zoology and Botany of New Holland, where they wrote: “the vast island, or rather continent, of Australia, Australasia or New Holland.” 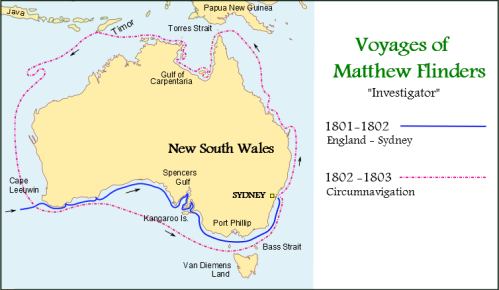 Map of the voyages of Matthew Flinders in the Investigator. Drawn using Inkscape. Base map AUS_locator_map.svg by user:Yarl.* Adapted from illustrations in Australian Navigators by Robert Tiley ISBN 0731811186 Source: Wikimedia Commons

Flinders explained his use of the name Australia in a letter to Joseph Banks, who had been on Cooks expedition when he discovered the east coast of the continent and was now President of the Royal Society.

The propriety of the name Australia or Terra Australis, which I have applied to the whole body of what has generally been called New Holland, must be submitted to the approbation of the Admiralty and the learned in geography. It seems to me an inconsistent thing that captain Cooks New South Wales should be absorbed in the New Holland of the Dutch, and therefore I have reverted to the original name Terra Australis or the Great South Land, by which it was distinguished even by the Dutch during the 17th century; for it appears that it was not until some time after Tasman’s second voyage that the name New Holland was first applied, and then it was long before it displaced T’Zuydt Landt in the charts, and could not extend to what was not yet known to have existence; New South Wales, therefore, ought to remain distinct from New Holland; but as it is requisite that the whole body should have one general name, since it is now known (if there is no great error in the Dutch part) that it is certainly all one land, so I judge, that one less exceptionable to all parties and on all accounts cannot be found than that now applied.

Banks did not approve of Flinders’ suggestion and in the preface to Flinders’ 1814 book A Voyage to Terra Australis, effectively published posthumously, Banks wrote:

It was not until after Tasman’s second voyage, in 1644, that the general name Terra Australis, or Great South Land, was made to give place to the new term of New Holland; and it was then applied only to the parts lying westward of a meridian line, passing through Arnhem’s Land on the north, and near the Isles St Peter and St Francis on the south: All to the eastward, including the shores of the Gulph of Carpentaria, still remained Terra Australis. This appears from a chart by Thevenot in 1663, which he says “was originally taken from that done in inlaid work upon the pavement of the new Stadt House at Amsterdam”. It is necessary, however, to geographical precision that the whole of this great body of land should be distinguished by one general term, and under the circumstances of the discovery of the different parts, the original Terra Australis has been judged the most proper. Of this term, therefore, we shall hereafter make use when speaking of New Holland and New South Wales in a collective sense; and when using it in an extensive signification, the adjacent isles, including that of Van Diemen, must be understood to be comprehended.

A Complete map of the Southern Continent survey’d by Capt. Abel Tasman & depicted by order of the East India Company in Holland in the Stadt House at Amsterdam; E. Bowen Created 1774 Source: Wikimedia Commons

However Lachlan Macquarie, the Governor of New South Wales from 1810 till 1820 began to use the name Australia in his dispatches to England. In 1817 he recommended to the Colonial Office that the name should be adopted and in 1824 the British Admiralty agreed to the continent being officially known as Australia. Flinders certainly played an important role in the southern continent receiving the name Australia but he did not name it. It should be also noted that politics, the denying of Holland’s role in the European discovery of Australia, played a central role in the story.

A few days ago I stumbled across this cartoon on Facebook, which I think makes for a suitable comment on the whole discussion on the discovery and naming of Australia. 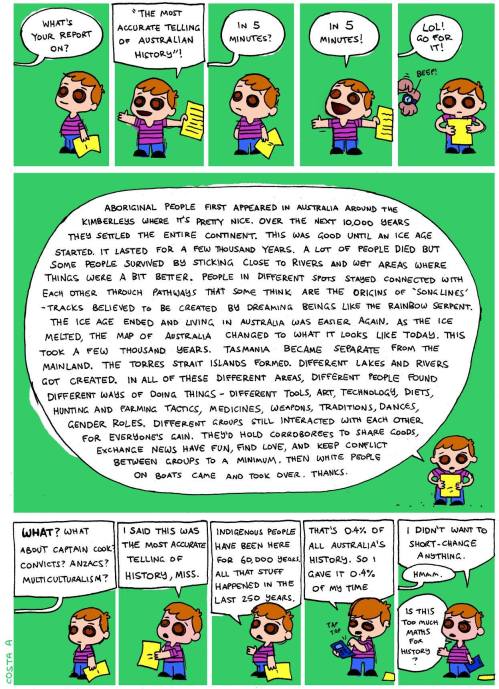 Filed under History of Cartography

5 responses to “Matthew Flinders and the naming of Australia”