California, preaching on the burning shore

California, I’ll be knocking on the golden door

Like an angel, standing in a shaft of light

Rising up to paradise, I know I’m gonna shine.

So, as regular readers are well aware I have just spent ten days in the Golden State and as is my wont this is a brief blog post about that journey. I went to California principally to attend scifoo18 in Mountain View. Scifoo is an exclusive, invitation only unconference held once a year at Google in Mountain View by Digital Science, Google, Nature and O’Reilly; foo is short for Friends of O’Reilly. For reasons that I don’t understand I got invited to scifoo15 and had an amazing, once in a lifetime or so I thought, experience. You can read about it here. For reasons that I understand even less I got invited back this year and after some hesitation decided to go, supported by my very generous readers.

Once again the experience of almost nonstop conversations for two days with three hundred people, all of them experts in their diverse scientific fields, proved to be an exhilarating, mind warping experience that defies description. I will however just mention two things. Firstly, I got to meet and briefly to talk with Stewart Brand, Merry Prankster and man behind both The Whole Earth Catalog and The WELL. I owned a copy of the 1971 Last Whole Earth Catalog and meeting Stewart Brand was for me like meeting one of your favourite rock stars.

The second thing concerns my very generous sponsoring readers. At the end of scifoo there is a general session and during this people were asked to relate any special experience that they had had during the weekend. After some hesitation I got up and took a microphone and said the following, “ I attended scifoo15 and had a truly mind blowing experience and never expected to get invited back. However, I did get invited back and initially thought I would have to reject the invitation because I’m a freelance historian of science and a retiree and don’t have very much money. Then I set up a GoFundMe and asked my readers to help me come here. I got €1700 in a few days and so I’m here. I want to publicly thank my unbelievably generous readers, who made it possible for me to come here and to meet all of you.” When I finished I got a thunderous round of applause and for the next half an hour people kept coming up to me and saying that was a wonderful story. So I say one last time thank you to all the wonderful people who helped make my scifoo visit possible.

On the Saturday evening I met up with Travis, who used to live in Prague and is responsible for the History of Alchemy podcast. We had met previously when he and his friends visited me in Nürnberg. He now lives in Santa Clara just down the road from my hotel in Sunnyvale. It was a very pleasant evening.

In 2015 having flown all the way to San Francisco I spent several days playing the tourist in San Francisco and Oakland. This time I decided to travel down to Los Angeles. For some time I have been acting as an advisor to an interdisciplinary group of art historians in LA called project AWE. When I said that I would come and visit them in LA they immediately said I could hold a lecture, so I did.

I flew to LA on the Monday morning and spent the day doing very little, recovering from the weekend. On Tuesday I visited Gypsy, a master’s student from the Western Esoteric Institute of Amsterdam University, who was the first person from project AWE to contact me and who had also visited me in Nürnberg. Gypsy cooked me a great meal and then drove me to Venice Beach where I spent a nice afternoon playing at being a tourist including seeing the Pacific ocean for the first time in my life and consuming my first milkshake in about ten thousand year.

On Wednesday I went to The Huntington, a museum, library and botanical garden in San Marino, where Internet friend Joel A Klein is Molina Curator of the History of Medicine and Allied Sciences. Met up with Joel and had a great chat before spending the day seeing as much of the Huntington as is possible in one day, highly recommended.

Thursday was another lazy day before I held my lecture in the evening on Albrecht Dürer as a Renaissance Mathematicus to an audience of art historians and artists, who received my offering with much enthusiasm. 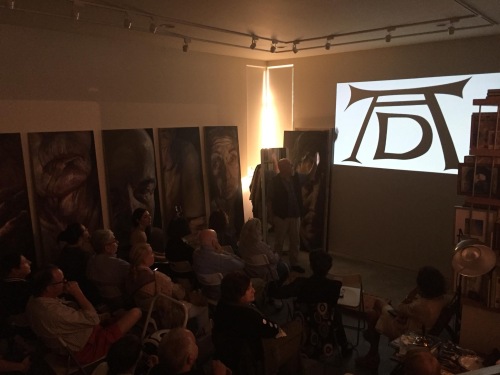 You can view your friendly neighbourhood blogger stumbling and stuttering his way through that lecture here.

On Friday Zhenya Gershman, art historian and founder of project AWE, took me round the art galleries of the Getty Centre, where she had worked for eleven years. I can tell you that to go round an art gallery with an art historian, who is intimately acquainted with that gallery, is the only way to do it. You can find photos and brief biographies of both Gypsy and Zhenya here.

I would like to thank the people at scifoo, especially the truly amazing Cat Allman, Travis, Gypsy, Joel and Zhenya for making my visit to California a very memorable experience.

And so ends the 2018 adventures of the Renaissance Mathematicus in the Golden State.