There is a widespread, highly erroneous, popular perception in the world, much loved by gnu atheists and supporters of scientism, that as soon as Petreius published Copernicus’s De Revolutionibus in 1543 the question as to which was the correct astronomical/cosmological system for the cosmos was as good as settled and that when Galileo published his Dialogo[1] everything was finally done and dusted and anybody who still persisted in opposing the acceptance of the heliocentric world view, did so purely on grounds of ignorant, anti-science, religious prejudice. Readers of this blog will know that I have expended a certain amount of energy and several thousand words over the years countering this totally mistaken interpretation of the history of astronomy in the early modern period and today I’m going to add even more words to the struggle.

Galileo is held up by his numerous acolytes as a man of great scientific virtue, who preached a gospel of empirical scientific truth in the face of the superstitious, faith based errors of his numerous detractors; he was a true martyr for science. The fact that Galileo was capable of scientific skulduggery does not occur to them, but not only was he capable of such, his work is littered with examples of it. One of his favourite tactics was not to present his opponents true views when criticising them but to create a strawman, claiming that this represents the views of his opponent and then to burn it down with his always-red-hot rhetorical flamethrower.

Towards the end of The First Day in the Dialogo, Galileo has Simplicio, the fall guy for geocentricity, introduce a “booklet of theses, which is full of novelties.” Salviati, who is the champion of heliocentricity and at the same time Galileo’s mouthpiece, ridicules this booklet as producing arguments full of “falsehoods and fallacies and contradictions” and as “thinking up, one by one, things that would be required to serve his purposes, instead of adjusting his purposes step by step to things as they are.” Galileo goes on to do a polemical hatchet job on what he claims are the main arguments in said “booklet of theses.” Amongst others he accuses the author of “setting himself up to refute another’s doctrine while remaining ignorant of the basic foundations upon which the whole structure are supported.”

The “booklet of theses”, which Galileo doesn’t name, is in fact the splendidly titled: 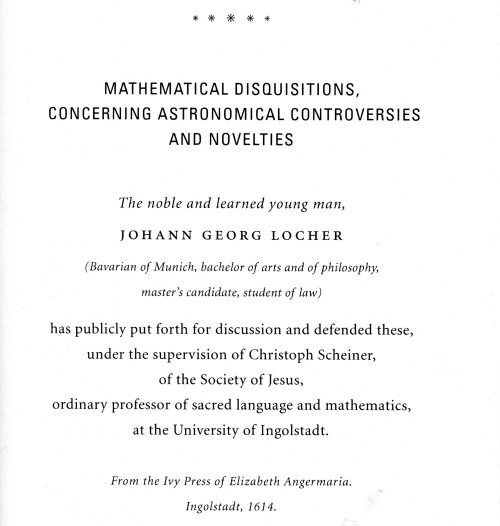 Now most of the acolytes who fervently praise Galileo as the great defender of science against superstition probably have no idea who Johann Georg Locher was but they might well have heard of Christoph Scheiner, who was famously embroiled in a dispute with Galileo over the nature of sunspots and who first observed them with a telescope. In fact the authorship of the Mathematical Disquisitions has often falsely attributed to Scheiner and Galileo’s demolition of it seen as an extension of that dispute and it’s sequel in the pages of his Il Saggiatore.

Whereas Galileo’s Dialogo has been available to the general reader in a good English translation by Stillman Drake since 1953, anybody who wished to consult Locher’s Mathematical Disquisitions in order to check the veracity or lack thereof of Galileo’s account would have had to hunt down a 17th century Latin original in the rare books room of a specialist library. The playing field has now been levelled with the publication of an excellent modern English translation of Locher’s booklet by Renaissance Mathematicus friend, commentator and occasional guest contributor Chris Graney[2]. 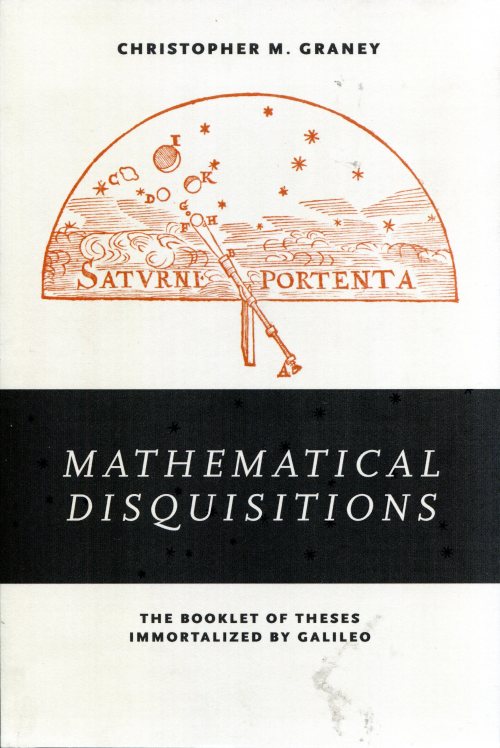 Graney’s translation (Christopher M. Graney, Mathematical Disquisitions: The Booklet of Theses Immortalised by Galileo, University of Notre Dame Press, Notre Dame, Indiana, 2017)  presents a more than somewhat different picture of Locher’s views on astronomy to that served up by Galileo in the Dialogo and in fact gives us a very clear picture of the definitely rational arguments presented by the opponents to heliocentricity in the early part of the seventeenth century. The translation contains an excellent explanatory introduction by Graney, extensive endnotes explaining various technical aspects of Locher’s text and also some of the specific translation decisions of difficult terms. (I should point out that another Renaissance Mathematicus friend, Darin Hayton acted as translation consultant on this volume). There is an extensive bibliography of the works consulted for the explanatory notes and an excellent index. 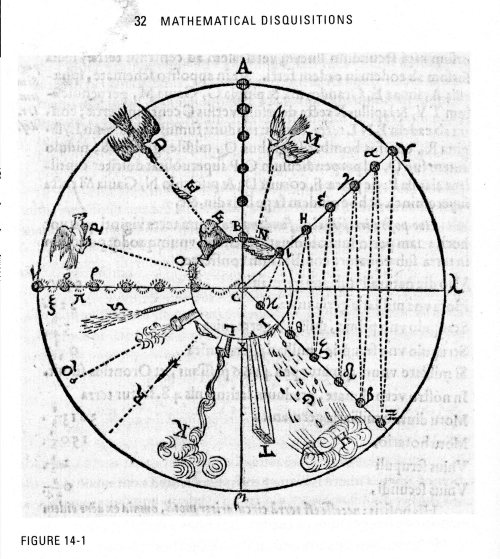 Locher’s illustration to his discussion of diurnal rotation p. 32

Graney’s translation provides a great addition to his previous Setting Aside All Authority, which I reviewed here. Graney is doing sterling work in adjusting the very distorted view of the astronomical system discussion in the first half of the seventeenth century and anybody, who is seriously interested in learning the true facts of that discussion, should definitely read his latest contribution.

[1] By a strange cosmic coincidence the first printed copy of the Dialogo was presented to the dedicatee Ferdinando II d’Medici, Grand Duke of Tuscany 386 years ago today on 22 February 1632.

[2] At the end of my review of Setting Aside All Authority I wrote the following, which applies equally to this review; in this case I provided one of the cover blurbs for Chris’ latest book.

Disclosure; Chris Graney is not only a colleague, but he and his wife, Christina, are also personal friends of mine. Beyond that, Chris has written, at my request, several guest blogs here at the Renaissance Mathematicus, all of which were based on his research for the book. Even more relevant I was, purely by accident I hasten to add, one of those responsible for sending Chris off on the historical trail that led to him writing this book; a fact that is acknowledged on page xiv of the introduction. All of this, of course, disqualifies me as an impartial reviewer of this book but I’m going to review it anyway. Anybody who knows me, knows that I don’t pull punches and when the subject is history of science I don’t do favours for friends. If I thought Chris’ book was not up to par I might refrain from reviewing it and explain to him privately why. If I thought the book was truly bad I would warn him privately and still write a negative review to keep people from wasting their time with it. However, thankfully, none of this is the case, so I could with a clear conscience write the positive review you are reading. If you don’t trust my impartiality, fair enough, read somebody else’s review.

Addendum: The orthography of the neologism in the title was change—23,02,18— following a straw pole on Twitter