Bringing the heavens down to earth

The Frisian Protestant pastor and amateur astronomer, David Fabricius, was beaten to death by one of his parishioners on 7 May 1617. Because he corresponded with both Tycho Brahe and Johannes Kepler and was quite a significant figure in Early Modern astronomy the Society for the History of Astronomy had a short post on Facebook commemorating his death on last Sunday, which contained the following claim:

David Fabricius was, following Galileo’s lead, one of the early users of the telescope in astronomy[1]

This claim contains two factual errors. The first is that it was Johannes, David’s son, who introduced the telescope into the Fabricius household and not David, although David soon joined his son in his telescopic observations. I’ll explain further later. 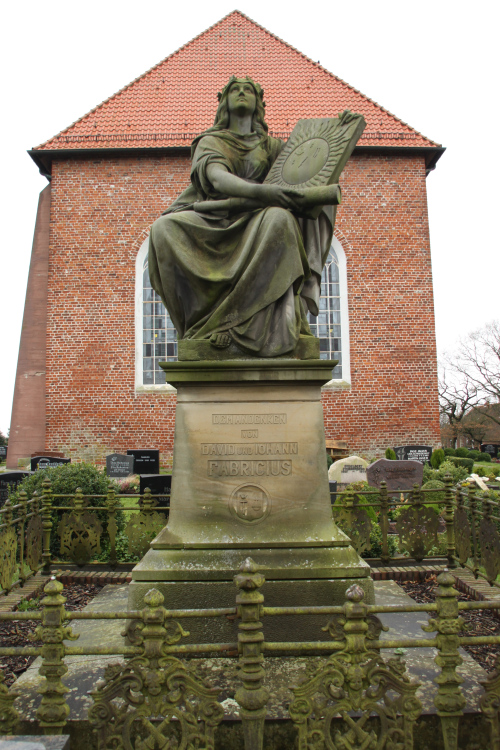 The Fabricii, father and son, remain largely unknown to the world at large but a monument to them both was erected in the churchyard in Osteel, where David had been village pastor, in 1895.

The second error is more serious because it indirectly perpetuates a widespread myth concerning the introduction of the telescope into astronomy and Galileo’s role in it. There is a popular perception that Galileo, and only Galileo, had the genius, the wit, the vision to realise that the newly invented telescope could be used as an astronomical instrument and that he singlehandedly pioneered this new discipline, telescopic astronomy. This is of course complete rubbish and seriously distorts the early history of the telescope in astronomy and does a major disservice to all of the others who contributed to that early history. I will admit to having done a small fist pump when I read the following in John Heilbron’s Galileo biography:

The transformation of the Dutch gadget into an instrument powerful to discover novelties in the heavens did not require a Galileo. His unique strength lay in interpreting what he saw.[2]

That the telescope could be used as an astronomical instrument was recognised during its very first public demonstration by its inventor, the German/Dutch spectacle maker Hans Lipperhey, which took place at the court of Prince Maurice of Nassau in Den Haag during the Dutch-Spanish Peace Conference on an unknown day between 25 and 29 September 1608. We have a detailed account of this demonstration from a French flyer or newsletter describing the first visit of the Ambassador of Siam to Europe, the Ambassador being present at the demonstration. Through this flyer the news of the new invention spread rapidly throughout Europe. Amongst the other descriptions of the wonderful abilities of this “…device by means of which all things at a very great distance can be seen as if they were nearby, by looking through glasses…” we can read the following:

The said glasses are very useful at sieges & in similar affairs, because one can distinguish from a mile’s distance & beyond several objects very well, as if they are near & even the stars which normally are not visible for us, because of the scanty proportion and feeble sight of our eyes, can be seen with this instrument. [my emphasis] 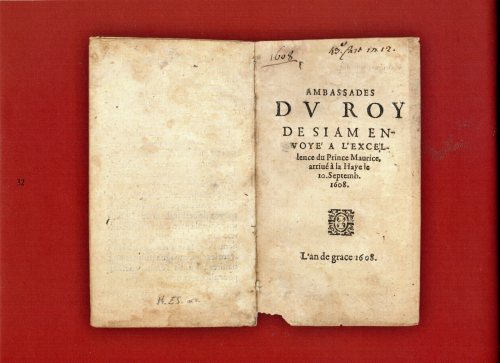 The first astronomer to build and use a telescope as an astronomical instrument was Thomas Harriot, who drew a sketch of the moon using a telescope on 26 July 1609 before Galileo even had a telescope.

This of course raises the question where Harriot obtained his knowledge of this instrument. In the early phase of the telescopes existence it became a common habit to present heads of state and other worthies telescopes as presents. In England James I (VI of Scotland) was presented with one at the end of an elaborate masque created for the occasion by Ben Jonson, the Renaissance playwright. The telescope was obtained from the United Provinces through the offices of Cornelis Drebbel, the Dutch inventor and scholar, who was employed at James’ court. This telescope was probably Harriot’s, who enjoyed good connections to court circles, introduction to the instrument.

Harriot did not observe alone. In London he observed together with his instrument maker Christopher Tooke in London, whilst Harriot’s pupil the landowner and MP, Sir William Lower observed in Wales, together with his neighbour John Prydderch, with a telescope made by Harriot and Tooke. Each pair took turns in observing comparing their results and then Harriot and Lower compared results by letter. This meant that they could be reasonably certain that what they had observed was real and not some optical artefacts produced by the poor quality of the lenses they were using. So here we have four telescopic astronomical observers independent of Galileo’s activities.

A cartoon of Lower and Prydderch on page 265 of Seryddiaeth a Seryddwyr. [4] Lower looks through a telescope while Prydderch holds a cross-staff. The cartoon had been used earlier by Arthur Mee in his book The Story of the Telescope in 1909. [5] The artist was J. M. Staniforth, the artist-in-chief of the Western Mail newspaper.

In Franconia Simon Marius also built and used telescopes in 1609, at the time unaware of the similar activities of Galileo in Padua. As I have written in another blog post Marius discovered the four largest moons of Jupiter just one day later and independently of Galileo. Marius also made the first telescopic observations of the Andromeda Nebula, significant because the Andromeda Nebula would later become the first galaxy to be recognised as a galaxy outside of our galaxy.

Another telescopic pioneer in Southern Germany was the Jesuit astronomer in Ingolstadt, Christoph Scheiner, who famously became embroiled in a dispute with Galileo over who had first observed sunspots with a telescope and what exactly they were.

The dispute was rather pointless, as Harriot had actually observed sunspots earlier than both of them and Johannes Fabricius, to whom we will turn next, had already published a report on his sunspot observations unknown to the two adversaries. Christoph Scheiner and his assistant, another Jesuit astronomer, Johann Baptist Cysat, would go on to make several important contributions to telescopic astronomy.

Johannes Fabricius brought his telescope home from the University of Leiden, where he had almost certainly learnt of this instrument through the lectures of Rudolph Snel van Royan, professor of mathematics and father of the better know Willibrord Snel of Snell’s law of refraction fame. Rudolph Snel van Royan was probably the first university professor to lecture on the telescope as a scientific instrument already in 1610.

It is also known that Cort Aslakssøn and Christian Longomontanus acquired lenses and built their own telescopes in the first couple of years of telescopic astronomy in Copenhagen, but unfortunately I haven’t, until now, been able to find any more details of activities in this direction. If any of my readers could direct me to any literature on the subject I would be very grateful.

Turning to Italy we find the astronomers on the Collegio Romano under the watchful eye of Christoph Clavius making telescopic astronomical observations before Galileo published his Sidereus Nuncius in 1610, using a Dutch telescope sent to Odo van Maelcote by one of his earlier students Peter Scholier. Grégoire de Saint-Vincent would later claim that he and Odo van Maelcote were probably the very first astronomers to observe Saturn using a telescope. It was the astronomers of the Collegio Romano, most notably Giovanni Paolo Lembo and Christoph Grienberger, who would then go on to provide the very necessary independent confirmation of the discoveries that Galileo had published in the Sidereus Nuncius.

As can be seen Galileo was anything but the singlehanded pioneer of telescopic astronomy in those early months and years of the discipline. What is interesting is that those working within the discipline were not isolated lone warriors but a linked network, who exchanged letter and publications with each other.

What we have here is not Galileo Galilei as singlehanded pioneer of telescopic astronomy but a loosely knit European community of telescopic astronomers who all recognised and utilised the potential of this new instrument shortly after it appeared. They would soon be joined by others, in this case mostly motivated by Galileo’s Sidereus Nuncius, a few of them even supplied with telescopes out of Galileo’s own workshop. However what is very important to note is that although Galileo was without doubt the best telescopic observer of that first generation and certainly won the publication race, all of the discoveries that he made were also made independently and contemporaneously by others, so nothing would have been lost if he had never taken an interest in the spyglass from Holland.

6 responses to “Bringing the heavens down to earth”