God said “Let Newton be” and all was light.

Alexander Pope’s epitaph sets the capstone on the myth of Newton’s achievements that had been under construction since the publication of the Principia in 1687. Newton had single-handedly delivered up the core of modern science – mechanics, astronomy/cosmology, optics with a side order of mathematics – all packed up and ready to go, just pay at the cash desk on your way out. We, of course, know (you do know don’t you?) that Pope’s claim is more than somewhat hyperbolic and that Newton’s achievements have, over the centuries since his death, been greatly exaggerated. But what about the mechanics? Surely that is something that Newton delivered up as a finished package in the Principia? We all learnt Newtonian physics at school, didn’t we, and that – the three laws of motion, the definition of force and the rest – is all straight out of the Principia, isn’t it? Newtonian physics is Newton’s physics, isn’t it? There is a rule in journalism/blogging that if the title of an article/post is in the form of a question then the answer is no. So Newtonian physics is not Newton’s physics, or is it? The answer is actually a qualified yes, Newtonian physics is Newton’s physics, but it’s very qualified. 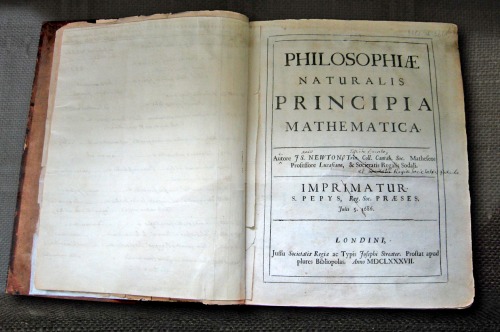 Newton’s own copy of his Principia, with hand-written corrections for the second edition
Source: Wikimedia Commons

The differences begin with the mathematics and this is important, after all Newton’s masterwork is The Mathematical Principles of Natural Philosophy with the emphasis very much on the mathematical. Newton wanted to differentiate his work, which he considered to be rigorously mathematical, from other versions of natural philosophy, in particular that of Descartes, which he saw as more speculatively philosophical. In this sense the Principia is a real change from much that went before and was rejected by some of a more philosophical and literary bent for exactly that reason. However Newton’s mathematics would prove a problem for any modern student learning Newtonian mechanics.

Our student would use calculus in his study of the mechanics writing his work either in Leibniz’s dx/dy notation or the more modern F’(x) = f(x) notation of the French mathematician, Lagrange (1736–1813). He won’t be using the dot notation developed by Newton and against which Babbage, Peacock, Herschel and the Analytical Society campaigned so hard at the beginning of the nineteenth century. In fact if our student turns to the Principia, he won’t find Newton’s dot notation calculus there either, as I explained in an earlier post Newton didn’t use calculus when writing the Principia, but did all of his mathematics with Euclidian geometry. This makes the Principia difficult to read for the modern reader and at times impenetrable. It should also be noted that although both Leibniz and Newton, independently of each other, codified a system of calculus – they didn’t invent it – at the end of the seventeenth century, they didn’t produce a completed system. A lot of the calculus that our student will be using was developed in the eighteenth century by such mathematicians as Pierre Varignon (1654–1722) in France and various Bernoullis as well as Leonard Euler (1707­1783) in Switzerland. The concept of limits that are so important to our modern student’s calculus proofs was first introduced by Bernard Bolzano (1781–1848), Augustin-Louis Cauchy (1789–1857) and above all Karl Theodor Wilhelm Weierstrass (1815–1897) in the nineteenth century.

Turning from the mathematics to the physics itself, although the core of what we now know as Newtonian mechanics can be found in the Principia, what we actually use/ teach today is actually an eighteenth-century synthesis of Newton’s work with elements taken from the works of Descartes and Leibniz; something our Isaac would definitely not have been very happy about, as he nursed a strong aversion to both of them.

A notable example of this synthesis concerns the relationship between mass, velocity and energy and was brought about one of the very few women to be involved in these developments in the eighteenth century, Gabrielle-Émilie Le Tonnelier de Breteuil, Marquise du Châtelet, the French aristocrat, lover of Voltaire and translator of the first French edition of the Principia. 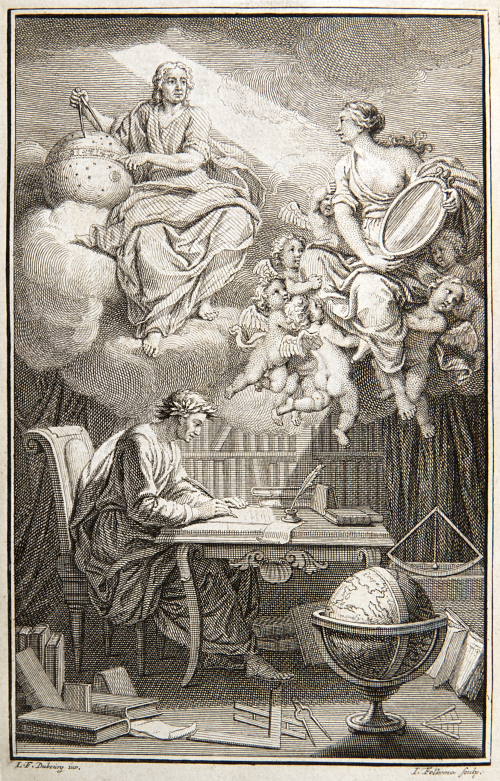 One should remember that mechanics doesn’t begin with Newton; Simon Stevin, Galileo Galilei, Giovanni Alfonso Borelli, René Descartes, Christiaan Huygens and others all produced works on mechanics before Newton and a lot of their work flowed into the Principia. One of the problems of mechanics discussed in the seventeenth century was the physics of elastic and inelastic collisions, sounds horribly technical but it’s the physics of billiard and snooker for example, which Descartes famously got wrong. Part of the problem is the value of the energy[1] imparted upon impact by an object of mass m travelling at a velocity v upon impact.

Newton believed that the solution was simply mass times velocity, mv and belief is the right term his explanation being surprisingly non-mathematical and rather religious. Leibniz, however, thought that the solution was mass times velocity squared, again with very little scientific justification. The support for the two theories was divided largely along nationalist line, the Germans siding with Leibniz and the British with Newton and it was the French Newtonian Émilie du Châtelet who settled the dispute in favour of Leibniz. Drawing on experimental results produced by the Dutch Newtonian, Willem Jacob ‘s Gravesande (1688–1742), she was able to demonstrate the impact energy is indeed mv2.

The purpose of this brief excurse into eighteenth-century physics is intended to show that contrary to Pope’s epitaph not even the great Isaac Newton can illuminate a whole branch of science in one sweep. He added a strong beam of light to many beacons already ignited by others throughout the seventeenth century but even he left many corners in the shadows for other researchers to find and illuminate in their turn.

Filed under History of Physics, History of science, Myths of Science, Newton, Uncategorized