The Goddess, her husband and his lovers

In recent days the science sections of the media have been full of the successful entering of orbit around Jupiter by the NASA probe Juno after its five-year, 2.8 billion kilometre journey from the Earth. Many of the reports also talk about the so-called Galilean moons, Jupiter’s four largest moons (there are currently 67 known moons of Jupiter), and Galileo’s discovery of them with the recently invented telescope in early 1610.

Juno was even carrying Lego models of the god Jupiter, the goddess Juno and Galileo holding a telescope. 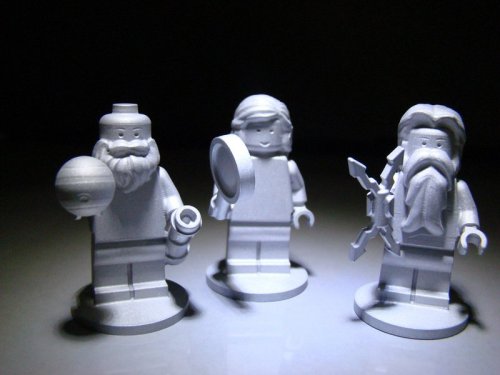 With the notable exception of the New York Times none of the reports mentioned that the Ansbach court mathematicus, Simon Marius, independently discovered the Galilean moons just one day later than Galileo. However, whereas Galileo rushed into print with his telescopic discoveries in his Sidereus nuncius in 1610, Marius waited until 1614 before publishing his discoveries in his Mundus Iovialis.

The four moons are named Io, Europa, Ganymede and Callisto after four of the lovers of Zeus, the Greek equivalent to Jupiter, and many people have made a joke about the fact that Juno, his wife, was on her way.

Once again what none of the reports, with the exception of the New York Times, mention is that the names were not given to the moons by Galileo. Wishing to use his telescopic discoveries to leverage a position at the Medici court in Florence Galileo wrote a letter to Grand Duke Cosimo’s secretary on 13 February 1610 asking if the Grand Duke would prefer the moons to be called Cosmania after his name or, rather, since they are exactly four in number, dedicate them to all four brothers with the name Medicean Stars (All heavenly bodies were referred to as stars in the Renaissance). The secretary replied that Cosimo would prefer the latter and so the moons became the Medicean Stars in the Sidereus nuncius.

The New York Times report attributed the names Io, Europa, Ganymede and Callisto to Simon Marius and they did indeed first appear in print in his Mundus Iovialis. However the names were not thought up by Marius.

In the Mundus Iovialis Marius makes several naming suggestions. His first suggestion is to just number the moons I to IV, a system that was actually used by astronomers. His second suggestion follows Galileo in that he wishes to name them after his employer/patron the Margrave of Ansbach’s family and call them the Brandenberger Stars. Marius’ third suggestion is more than somewhat bizarre as he suggests naming them in analogy to the solar system planets, so the moon with the smallest orbit would be the Jupiter Mercury, the next the Jupiter Venus, the third the Jupiter Jupiter and the fourth the Jupiter Saturn. As I said bizarre. It is with Marius’ fourth suggestion that we finally arrive at Zeus’ lovers. After talking about Jupiter’s reputation for a bit on the side and describing his most notorious affairs Marius write the following:

appealed all too much to the lascivious Jove

In the next paragraph Marius goes on to explain that the idea for using these names for the moons was suggested to him by Johannes Kepler[1] when the two of them met at the Imperial Parliament in Regensburg in October 1613. He then names Kepler as co-godfather of these four stars. Marius closes his list of suggestions by saying that the whole thing should not be taken too seriously and everybody is free to adopt or reject his suggestions as they see fit.

Addendum 7 July 2016: My attention has been drawn to a delightful pop song about the lascivious Jupiter, his dalliances with his satellites and the impending arrival of his wife, She’s Checking In (The NASA Juno Song) by Adam Sakellarides  h/t Daniel Fischer (@cosmos4u)

[1] It should be noted that Johannes Kepler loved coining names and terms for all things scientific. It is to him, for example, that we owe the term satellite, coined specifically for the Jupiter moons, and also the term camera obscura, which in shortened form is our modern camera.

13 responses to “The Goddess, her husband and his lovers”