The village all declared how much he knew,

‘Twas certain he could write, and cipher too;

Lands he could measure, times and tides presage,

And e’en the story ran that he could gauge

As I have commented on a number of occasions in the past, although most people only know Johannes Kepler, if they have heard of him at all, as the creator of his eponymous three laws of planetary motion in fact he published more than eighty books and pamphlets in his life covering a very wide range of scientific and mathematical subjects. One of those publications, which often brings a smile to the faces of those not aware of its mathematical significance, is his Nova stereometria doliorum vinariorum (which translates as The New Art of Measuring the Contents of Wine Barrels) published in 1615. A whole book devoted to determining the volume of wine barrels! Surely not a suitable subject for a man who determined the laws of the cosmos and helped lay the foundations of modern optics, had the good Johannes taken to drink in the face of his personal problems?

Because he is now regarded as one of the earliest ‘modern’ mathematicians people tend to forget that Kepler lived not in the age of the mathematician but in that of the mathematical practitioner. This means that as district mathematician in Graz, and later in Linz, Kepler would have been expected to carry out a large range of practical mathematical tasks including surveying, cartography, dialling (that is the design and construction of sundials), writing astrological prognostica, almanacs and calendars and gauging amongst others. We know that Kepler carried out a lot of these tasks but as far as I know he was never employed as a gauger, that is a man responsible for measuring and/or calculating the volume of barrels and their contents.

Nowadays with the wooden barrel degraded to the role of garden ornament in the forecourts of kitschy country pubs it is hard for people to imagine that for more than half a millennium the art of gauging and the profession of the gauger were a widespread and important part of the political and business life of Europe. Wooden barrels first made their appearance during the iron age, that is sometime during the first millennium BCE, iron making it possible to make tools with which craftsmen could work and shape the hard woods used to make barrels. It seems that we owe the invention of the barrel to the Celtic peoples of Northern Europe, who were making wooden barrels at least as early as five hundred BCE, although wooden buckets go back much earlier, with the earliest known one being from Egypt, 2690 BCE. The early wooden buckets were carved from single blocks of wood unlike barrels that are made from staves assembled and held together with hoops of saplings, rope or iron. 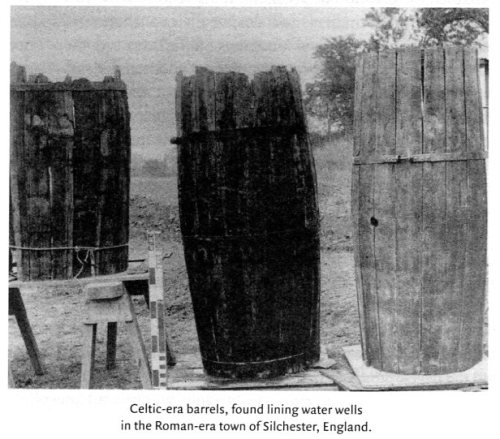 Source: Wood, Whiskey and Wine: A History of Barrels by Henry H. Work

The ancient Greeks and Romans used large clay vessels called amphora to transport goods, in particular liquids such a wine and oil.

However by about two hundred to three hundred CE the Romans, to whom we owe our written knowledge (supported by archaeological finds) of the Celtic origins of barrel making, were transporting wine in barrels. Wooden barrels appear to be a uniquely European invention appearing first in other parts of the world when introduced by Europeans.

By the Middle Ages wooden barrels had become ubiquitous throughout Europe used for transporting and storing a bewildering range of both dry and wet goods including books and corpses, the latter conserved in alcohol. With the vast increase in trade, both national and international, came the problem of taxes and custom duties on borders or at town gates. Wine, beer and spirits were taxed according to volume and the tax officials were faced with the problem of determining the volumes of the diverse barrels that poured daily across borders or through town gates, enter the gauger and the gauging rod.

The simplest method of determining the volume of liquid contained in a barrel would be to pour out contents into a measuring vessel. This was of course not a viable choice for tax or customs official, so something else had to be done. Because of its shape determining the volume of a barrel-shaped container is not a simple geometrical exercise like that of determining the volume of a cylinder, sphere or cube so the mathematicians had to find another way. The solution was a gauging rod. This is a rod marked with a scale that was inserted diagonally into the barrel through the bung hole and by reading off the number on the scale the gauger could then calculate a good approximation of the volume of fluid in the barrel and then calculate the tax or custom’s duty due. From some time in the High Middle ages through to the nineteenth century gaugers and their gauging rods and gauging slide rules were a standard part of the European trade landscape.

The mathematical literature on the art of gauging, particularly from the Early Modern Period is vast. As a small side note Antonie van Leeuwenhoek, the famous seventeenth-century microscopist, also worked for a time as gauger for the City of Delft. 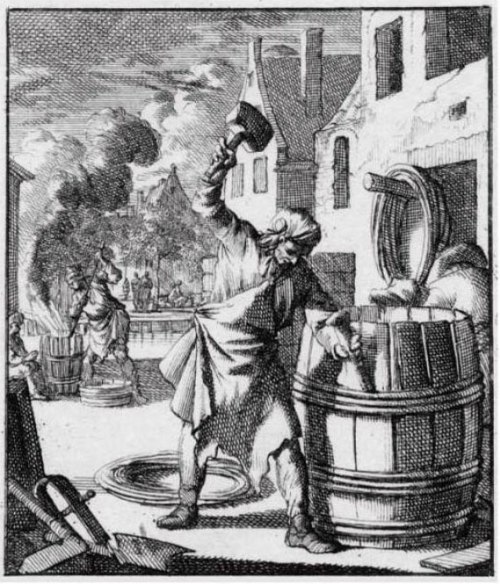 However after this brief excursion into the history of barrels and barrel gauging it is time to turn attention back to Kepler and his Nova stereometria doliorum vinarioru. In 1613, now living in Linz, Kepler purchased some barrels to lay in a supply of wine for his family. The wine dealer filled the casks and proceeded to measure the volume they contained using a gauging rod. Kepler being a notoriously exacting mathematician was horrified by the inaccuracy of this method of measurement and set about immediately to see if he produce a better mathematical method of determining the volume of barrels. Returning to the Eudoxian/Archimedian method of exhaustion that he had utilized to determine his second law of planetary motion he presented the volume of the barrel as the sum of a potentially infinite sum of a series of slices through the barrels. In modern terminology he used integral calculus to determine the volume. Never content to do half a job Kepler extended his mathematical investigations to determining the volumes of a wide range of three-dimensional containers and his efforts developed into a substantial book. Because he lacked the necessary notions of limits and convergence when summing infinite series, Kepler’s efforts lack mathematical rigour, as had his determination of his second law, a fact that Kepler was more than aware of. However, as with his second law he was prepared to sacrifice rigour for a practical functioning solution and to leave it to posterity to clean up the mess.

Having devoted so much time and effort to the task Kepler decided to publish his studies and immediately ran into new problems. There was at the time no printer/publisher in Linz so Kepler was forced to send his manuscript to Markus Welser, rich trader and science patron from Augsburg, who initiated the sunspot dispute between Galileo and Christoph Scheiner, to get his book published there. Unfortunately none of the printer/publishers in Augsburg were prepared to take on the risk of publishing the book and when Welser died in 1614 Kepler had to retrieve his manuscript and make other arrangements. In 1615 he fetched the printer Johannes Plank from Erfurt to Linz and paid him to print the book at his own cost. Unfortunately it proved to be anything but a best seller leaving Kepler with a loss on his efforts. In order to make his new discoveries available to a wider audience Kepler edited a very much simplified German edition in the same year under the title Ausszug auss der Vralten Messkunst Archimedis (Excerpts from the ancient art of mensuration by Archimedes). This book is important in the history of mathematics for provided the first German translations of numerous Greek and Latin mathematical terms. Plank remained in Linz and became Kepler’s house publisher during his time there. 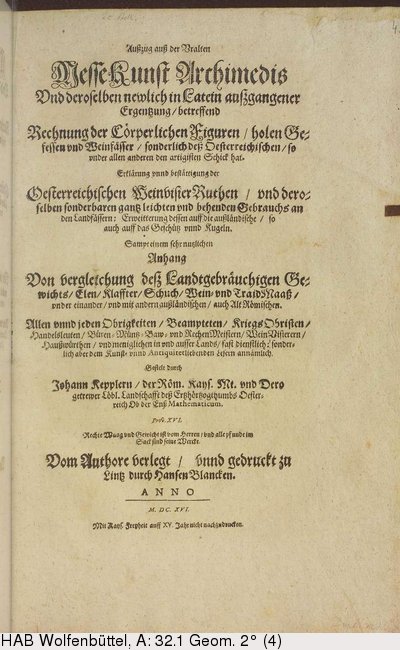 Although not one of his most successful works Kepler’s Nova stereometria doliorum is historically important for two different reasons. It was the first book to present a systematic study of the volumes of barrels based on geometrical principles and it also plays an important role in the history of infinitesimal calculus.