A misleading book title that creates the wrong impression

A new biography of Johannes Kepler has just appeared and although I haven’t even seen it yet, let alone read it, it brings out the HistSci Hulk side of my personality. What really annoys me on David Love’s book, Kepler and the Universe[1], is the title or rather the subtitle, How One Man Revolutionised Astronomy. Now, I for one have for many years conducted a private campaign to persuade people not to claim that we live in a Copernican Cosmos, a standard cliché, but that we live in a Keplerian Cosmos, because it was the very different elliptical system of Kepler that helped heliocentricity to its breakthrough and not the system of Copernicus. However Love’s subtitle immediately evokes the spectre of the lone genius and for all his undoubted brilliance Kepler was not a lone genius and especially not in terms of his cosmology/astronomy. 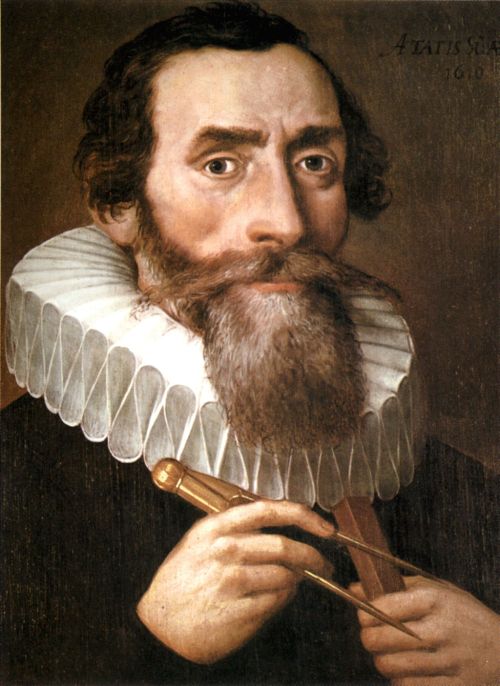 A 1610 portrait of Johannes Kepler by an unknown artist
Source: Wikipedia Commons

Even a cursory examination of Kepler’s road to his system will immediately reveal his intellectual debts and his co-conspirators, both willing and unwilling. First off is naturally Copernicus himself. Kepler did not conceive a heliocentric system from scratch but was, on his own admission a glowing admirer or even acolyte of the Ermländer scholar. This admiration is one of the principle reasons that we don’t truly acknowledge Kepler’s achievement but tend to dismiss it as having just dotted the ‘Is’ and crossed the ‘Ts’ in Copernicus’ system, a demonstrably false judgement. Kepler, of course, didn’t help the situation when he titled the most simple and readable version of his system, and the one that together with the Rudolphine Tables had the most influence, the Epitome Astronomiae Copernicanae. Not a smart move! Whatever, we are already at two men who revolutionised astronomy.

Kepler did not discover Copernicus himself but was introduced to him by his teacher Michael Maestlin at the University of Tübingen. Usually Maestlin gets mentioned in passing as Kepler’s teacher and then forgotten but he played a very important role in Kepler’s early development. In reality Maestlin was himself one of the leading European astronomers and mathematicians in the latter part of the sixteenth century, as well as being by all accounts an excellent teacher. He was also one of the very few supporters of both Copernican astronomy and cosmology. This meant that he gave Kepler probably the best foundation in the mathematical sciences that he could have found anywhere at the time, as well as awakening his interest in Copernican thought. It was also Maestlin who decided Kepler would be better off becoming a teacher of mathematics and district mathematician rather than training for the priesthood; a decision that Kepler only accepted very, very reluctantly. Even after he had left Tübingen Maestlin continued to support the young Kepler, although he would withdraw from him in later years. Maestlin edited, corrected and polished Kepler’s, so important, first publication, the Mysterium Cosmographicum. In fact Maestlin’s contributions to the finished book were so great he might even be considered a co-author. Some people think that in later life Kepler abandoned the, for us, rather bizarre Renaissance hypothesis of the Cosmographicum, but he remained true to his initial flash of inspiration till the very end, regarding all of his later work as just refinements of that first big idea. Maestlin’s contribution to the Keplerian system was very substantial. And then there were three.

Tycho! Without Tycho Brahe there would be no Keplerian System. Tycho and Kepler are the Siamese twins of elliptical astronomy joined at the astronomical data. Without Tycho’s data Kepler could never have built his system. This duality is recognised in many history of astronomy texts with the two, so different, giants of Renaissance astronomy being handled together. The popular history of science writer, Kitty Ferguson even wrote a dual biography, Tycho and Kepler, The Unlikely Partnership that Forever Changed our Understanding of the Heavens[2], a title that of course contradicts Love’s One Man. Her original title was The Nobleman and His Housedog, with the rest as a subtitle, but it seems to have been dropped in later editions of the book. The ‘housedog’ is a reference to Kepler characterising himself as such in the horoscope he wrote when he was twenty-five years old.

Tycho invited Kepler to come and work with him in Prague when the Counter Reformation made him jobless and homeless. Tycho welcomed him back when Kepler went off in a huff at their first meeting. It was Tycho who assigned him the task of calculating the orbit of Mars that would lead him to discover his first two laws of planetary motion. It has been said that Tycho’s data had just the right level of accuracy to enable Kepler to determine his elliptical orbits. Any less accurate and the slight eccentricities would not have been discernable. Any more accurate and the irregularities in the orbits, thus made visible, would have made the discovery of the elliptical form almost impossible. It has also been said that of all the planets for which Tycho had observation data Mars was the one with the most easily discernable elliptical orbit. Serendipity seems to have also played a role in the discovery of Kepler’s system. The high quality of Tycho’s data also led Kepler to reject an earlier non-elliptical solution for the orbit of Mars, which another astronomer would probably have accepted, with the argument that it was not mathematically accurate enough to do honour to Tycho’s so carefully acquired observational data.

Tycho was anything but a one-man show and his observatory on the island of Hven has quite correctly been described as a research institute. A substantial number of astronomer, mathematicians and instrument maker came and went both on Hven and later in Prague over the almost thirty years that Tycho took to accumulate his data. The number of people who deserve a share in the cake that was Kepler’s system now reaches a point where it become silly to count them individually.

Our list even includes royalty. Rudolph II, Holly Roman Emperor, was the man, who, at Tycho’s request, gave Kepler a position at court, even if he was more than somewhat lax at paying his salary, official to calculate the Rudolphine Tables, a task that would plague Kepler for almost thirty years but would in the end lead to the acceptance of his system by other astronomers. Rudolph also appointed Kepler as Tycho’s successor, as Imperial Mathematicus, after the latter’s untimely death, thus giving him the chance to continue his analysis of Tycho’s data. Rudolph could just as easily have sacked him and sent him on his way. Tycho’s heirs did not assist Kepler in his struggle to maintain access to that all important data, which belonged to them and not the Emperor, causing him much heartache before they finally allowed him to use Tycho’s inheritance. After he had usurped his brother, Rudolph, in 1612, Matthias allowed Kepler to keep his official position and title as Imperial Mathematicus, although sending him away from court, a fact that certainly assisted Kepler in his work. Being Imperial Mathematicus gave him social status and clout.

Kepler described his long and weary struggles with the orbit of Mars as a battle, but he did not fight this battle alone. In a long and fascinating correspondence with the astronomer, David Fabricius, Kepler tried out his ideas and results with a convinced supporter of Tycho’s system. Kepler would present his ideas and David Fabricius subjected them to high level and very knowledgeable criticism. Through this procedure Kepler honed, refined and polished his theories to perfection before he submitted them to public gaze in his Astronomia Nova, Knowing that they would now withstand high-level professional criticism. David Fabricius, who never met Kepler, nevertheless took a highly active role in the shaping of the Keplerian system[3].

Monument for David and Johann Fabricius in the Graveyard of Osteel

Even after Kepler’s death the active participation of others in shaping his astronomical system did not cease. Jeremiah Horrocks corrected and extended the calculations of the Rudolphine Tables, enabling him to predict and observe a transit of Venus, an important stepping-stone in the acceptance of the elliptical astronomy. Horrocks also determined that the moon’s orbit was a Keplerian ellipse, something that Kepler had not done.

Stained glass roundel memorial in Much Hoole Church to Jeremiah Horrocks making the first observation and recording of a transit of Venus in 1639. The Latin reads “Ecce gratissimum spectaculum et tot votorum materiem”: “oh, most grateful spectacle, the realization of so many ardent desires”. It is taken from Horrocks’s report of the transit

Cassini, together with Riccioli and Grimaldi, using a heliometer determined that either the orbit of the sun around the earth or the earth around the sun, the method can’t determine which is true, is an ellipse another important empirical stepping-stone on the road to final acceptance for the system. 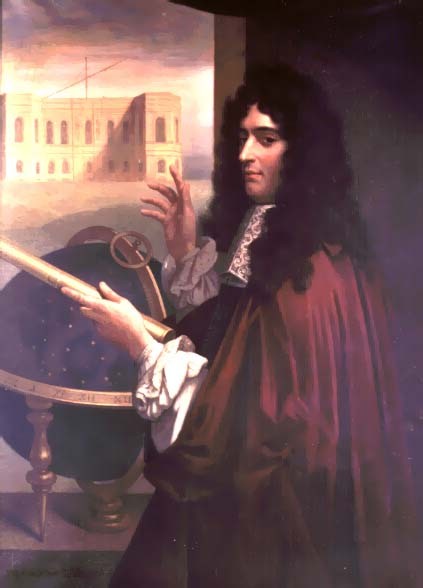 Nicholas Mercator produced a new mathematical derivation of Kepler’s second law around 1670. Kepler’s own derivation was, as he himself admitted, more than a little suspect, viewed mathematically. The first and third laws had been accepted by the astronomical community fairly easily but the second law was a major bone of contention. Mercator’s new derivation basically laid the dispute to rest.

Cassini in his new role as director of the Paris observatory showed empirically that the satellite systems of both Jupiter and Saturn also obeyed Kepler’s third law extending it effectively to all orbitary systems and not just the planets of the solar system.

Lastly Newton derived Kepler’s first and second laws from his axiomatic system of dynamics giving them the true status of laws of physics. This led Newton to claim that the third law was Kepler’s but the first two were his because he, as opposed to Kepler, had really proved them

As we can see the list of people involved in revolutionising astronomy in the seventeenth century in that they replaced all the geocentric systems with a Keplerian elliptical system is by no means restricted to ‘one man’ as claimed in the subtitle to David Love’s book but is quite extensive and very diverse. There are no lone geniuses; science is a collective, collaborative enterprise.

[1] David Love, Kepler and the Universe: How One Man Revolutionized Astronomy, Prometheus Books, 2015

[2] Kitty Ferguson, Tycho and Kepler, The Unlikely Partnership that Forever Changed our Understanding of the Heavens, Walker Books, 2002

[3] For a wonderful description of this correspondence and how it contributed to the genesis of Astronmia Nova see James Voelkel’s excellent, The Composition of Kepler’s Astronomia nova, Princeton University Press, 2001

Filed under History of Astronomy, Myths of Science, Uncategorized