The Phases of Venus and Heliocentricity: A Rough Guide

The word planet comes from the Greek word for wanderer. When people first started observing the heavens most of those points of light that we call stars appeared to remain fixed in place relative to each other, although the whole bowl of twinkling points appeared to revolve around the earth once every twenty-four hours, hence they became known as the sphere of fixed stars. With time however the early observers noticed that some of those points of lights behaved very differently to the vast majority, appearing to wander somewhat randomly around the heavens and these maverick stars became the planets. Further observations showed that the movement of the wanderers were in fact not random but followed a regularity that could, over suitably long periods of time, be recorded and then predicted in advance and planetary astronomy was born, however the behaviour of the various wanderers differed.

The Sun and Moon, which were both regarded as planets, have very special geocentric orbits and delivered the basics of timekeeping, the year and the day – the Sun – and the month and possible the seven day week (the phases of the moon) – the Moon. In the most common order of the planets, Moon, Mercury, Venus, Sun, Mars Jupiter and Saturn moving outwards from the Earth the remaining five planets were divided into the inner and outer planets with the Sun’s orbit providing the dividing line. The outer planets – Mars, Jupiter and Saturn – display a rather curious behaviour. They trundle along quite regularly in one directions then halt, reverse direction for a short period, halt again then reversing direction once again continue as before. This brief period of reversed motion is called retrograde motion and I’ll deal with its history and significance for heliocentricity in another post.

The two inner planets – Mercury and Venus – display a completely different orbital behaviour viewed from the Earth. Firstly they never stray very far from the Sun. They disappear for periods of time first being one side of the sun then reappearing on the other side and lastly their orbits around the Earth is exactly the same as the Sun’s i.e. one year. This combination of phenomena led some astronomers in antiquity to hypothesise that Venus and Mercury do not orbit the Earth but the Sun, being carried with it on its annual journey around the Earth. This model became know as the Egyptian or Heracleidian system. It was also presented in late antiquity by Martianus Capella in his De nuptiis Philologiae et Mercurii (“On the Marriage of Philology and Mercury”) a text that was very well known and popular in the Middle Ages and so the Heracleidian model was also well known in the Early Modern Period. 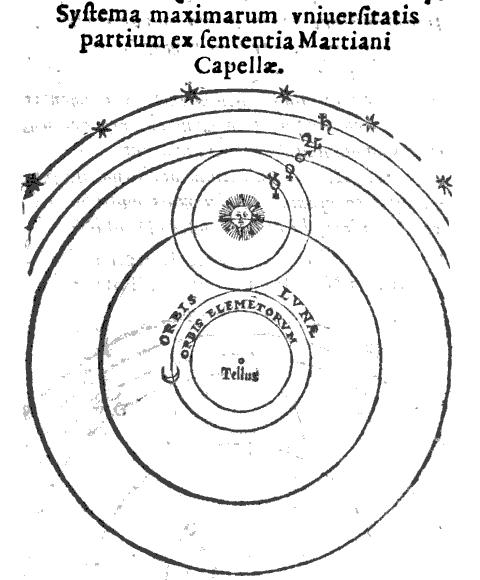 In the sixteenth-century the Danish astronomer Tycho Brahe seeing the advantages of Copernicus’ heliocentric astronomy but very unhappy about a moving Earth extended the Heracleidian system in that he let all five of the planets orbit the Sun, which in turn orbited the Earth. 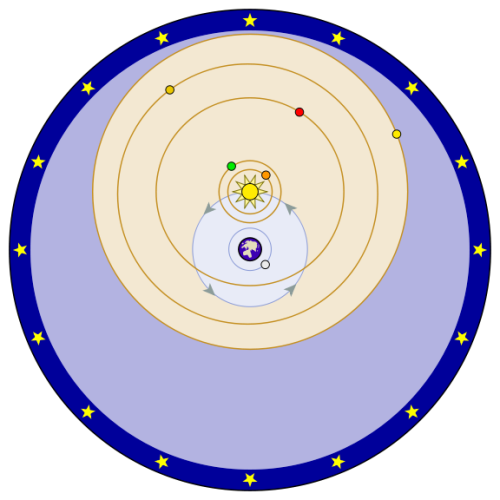 The telescope made its public debut in Holland in September 1608. Within a year Thomas Harriot in London, Simon Marius in Ansbach, Galileo Galilei in Padua, and the Jesuits Odo van Maelcote and Giovanni Paolo Lembo in Rome were all using the new instrument to make astronomical observations and ushering in a new era in our understanding of the cosmos. Famously, Galileo was the first in print with his Sidereus Nuncius, the impact of which I’ve dealt with here. The earliest known reference to the possibility of Venus having phases occurs in a letter sent by the mathematician Benedetto Castelli to his old teacher Galileo in December 1610. Referencing thoughts of Copernicus from chapter ten of book I of De revolutionibus, Castelli enquired if the telescope would make it possible to observe phases of Venus. This enquiry makes two assumptions, firstly that Venus orbits the sun and secondly that it is lit by reflected light from the sun and is not a light source itself.

Galileo experts are divided as to whether Galileo had already been considering the question before he received Castelli’s letter or whether he appropriated the idea without giving his onetime student the credit he deserved. Whatever, shortly after receiving this letter Galileo wrote to Kepler in Prague enclosing the following anagram announcing a new sensational discovery:

This reads in translation, “I am now bringing these unripe things together in vain, Oy!” It was common practice for researchers in the Early Modern Period to announce their new discoveries in the form of anagrams to establish their priority in an age that knew no patents or copyright in the modern sense. Kepler was unable to decipher Galileo’s message and had to wait until the Tuscan astronomer revealed his sensation to the world. Deciphered the anagram read as follows, in Latin:

In English translation this reads as, “The mother of love [Venus] copies the forms of Cynthia [the Moon]”. In other words Galileo had discovered that Venus has phases like the Moon and therefore must orbit the Sun and not the Earth. Also in 1610 Galileo informed his friend and former patron Christoph Clavius in Rome of his discovery. He included his discovery in his first letter on sunspots written and distributed privately in 1611/12 but which wasn’t published until 1613.

Actually having phases was not a sufficient proof of Venus’ heliocentricity; the matter is in reality somewhat more complicated. If Venus were to orbit the Earth in a geocentric system between the Earth and the Sun, as proposed by Ptolemaeus, then it would also display phases. However the phases of the two configurations differ substantially so the accurate observation of those phases is a true experimentum crucis, in Francis Bacon’s sense, between a geocentric and a heliocentric Venus. What Galileo had in fact observed were phases consistent with a heliocentric orbit for Venus.

The Phases of Venus in both systems

Independently of Galileo, Harriot, Marius and the Collegio Romano astronomers also observed the phases of Venus so there was no doubt that Venus and, by analogy, probably Mercury, (the phases of Mercury were first observed by the Jesuit astronomer Giovanni Battista Zupi in 1639) orbited the Sun and not the Earth. Harriot as usual did not publish, Marius sent his discovery to Kepler who published it in the preface of his Dioptrice in 1611. Odo von Maelcote included the Jesuit confirmation of Galileo’s observations in his speech during the banquet to honour Galileo at the Collegio Romano in 1611.

This discovery put an end, once and for all, to a pure geocentric system à la Ptolemaeus but did not as Castelli thought, in his letter to Galileo, provide definitive proof of Copernicus’ heliocentric system. Both the ancient Heracleidian and Tycho’s helio-geocentric systems would display the same, newly discovered, phases of Venus. This situation is illustrated on the famous title page of Riccioli’s Almagestum Novum (1651), which shows Ptolemaeus lying on the ground with his system, feebly claiming, “I will rise again” whilst Urania weighs the merits of the Copernican heliocentric system against those of Riccioli’s own semi-Tychonic system. In Riccioli’s system Mercury, Venus and Mars orbit the Sun, which in turn, together with Jupiter and Saturn, orbits the Earth. As far as I know, nobody other than Riccioli ever propagated this strange beast. 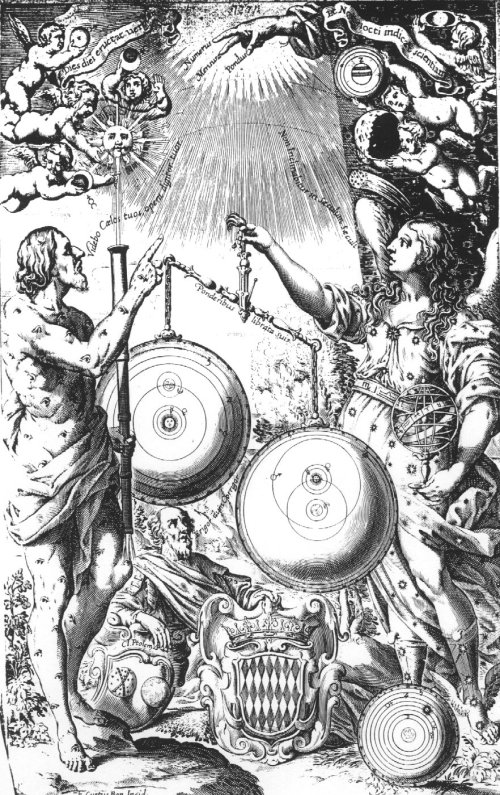 Although the phases of Venus were not decisive in deciding the conflict between the supporters of geocentricity and those of heliocentricity they did provide an important step along the twisting road towards the eventual acceptance of a heliocentric model, Kepler’s, for the then known cosmos.

h/t to my #histsci soul sister Rebekah “Becky” Higgitt whose questions on this topic on Twitter inspired this post.

Filed under History of Astronomy, Myths of Science

11 responses to “The Phases of Venus and Heliocentricity: A Rough Guide”