The seventeenth century polymath Robert Hooke, who was born   18th July 1635, is a complex and problematic figure in the history of science. Undoubtedly immensely talented and endlessly ingenious he did fascinating work in a vast number of different directions. However in spreading his interest and abilities over so many different fields he seems never to have produced any real major developments in any of them and so remained a minor figure in the pantheon of scientific gods. There are those of his fan club who argue that he was a victim of Newton’s enmity and had he not been sabotaged by his evil and all-powerful rival, he would have got the recognition he deserves. This argument suffers from two problems. Firstly it was Hooke who attacked Newton, not once but twice, and not the other way round. Secondly his scientific work is known to us and whilst it contains many an ingenious idea there is really nothing to compare with Kepler’s laws of planetary motion or Galileo’s laws of fall that would promote Hooke into the premier league of seventeenth century scientific investigators. There is however one piece of Hooke’s work that deserves much more recognition than it usually receives and which although it contains no real scientific breakthroughs in the sense of new laws, theories etc. does represent a major advance in the history of science, his Micrographia published in 1665. Hooke’s Micrographia is to microscopy what Galileo’s Sidereus Nuncius is to astronomical telescopy. The publication of Micrographia was the big bang in microscopic studies!

Science is our attempt to describe and to understand our world, our cosmos. This description is fundamentally empirical, that is we examine the world in which we exist with our senses. What does it look like, sound like, feel like, smell like and taste like. With respect to the last I’m often surprised that earlier medical and chemical investigators didn’t do themselves more harm with all the things they examined with their taste buds. At the beginning of the seventeenth century this empirical investigation changed radically with the twin invention of the telescope and the microscope. For the first time investigators had instruments available to extend, strengthen, make more powerful one of those senses, their sense of vision.

Although we are relatively well informed about the origins of the telescope, the origins of the microscope remain largely unknown. Many texts repeat the claim that the microscope was invented by Zacharias Jansen who is also credited with being an inventor of the telescope. This claim is based on a highly questionable posthumous report and modern historical research has shown that Jansen could not have been a co-inventor of the telescope and is thus also not the inventor of the microscope. The invention of the microscope is also credited to Galileo and although he never claimed to be the inventor he was probably an inventor. He describes how he discovered the magnification effect when he accidentally put his telescope to his eye the wrong way round. He then proceeded to specifically build microscopes using different lenses to those used in his telescopes. His story suggests that the microscope probably had several inventors who all made the same mistake as Galileo. We do know that the first person to build a Keplerian microscope, that is with two convex lenses, as opposed to the Galilean microscope, one convex and one concave lens, was the Dutch inventor and instrument maker Cornelis Drebbel in 1621.

The first known mention of a functioning telescope was of Hans Lippershey in September 1608 and already in 1609 Thomas Harriot, Simon Marius and Galileo Galilei were all undertaking fairly systematic telescopic astronomical observations. Harriot made the first telescopic drawing of the moon and of sunspots, Marius and Galileo discovered the largest moons of Jupiter almost simultaneously, their discoveries separated only by one day. Galileo stole a march on his competitors when he published his Sidereus Nuncius in March 1610. Although more a of popular than a scientific publication Sidereus Nuncius with its spectacular washes of the moon and its announcement of the Jupiter moon was an overnight sensation, elevating its author from an unknown insignificant professor of mathematics to the leading researcher in Europe and establishing the telescope as the scientific instrument of the day. Nothing similar happened with the microscope.

The first illustrations made with a microscope are attributed to Francesco Stelluti on a pamphlet published by the Acccademia dei Lincei to celebrate the election of Maffeo Barberini as Pope in 1623. The bees were the Barberini family emblem. 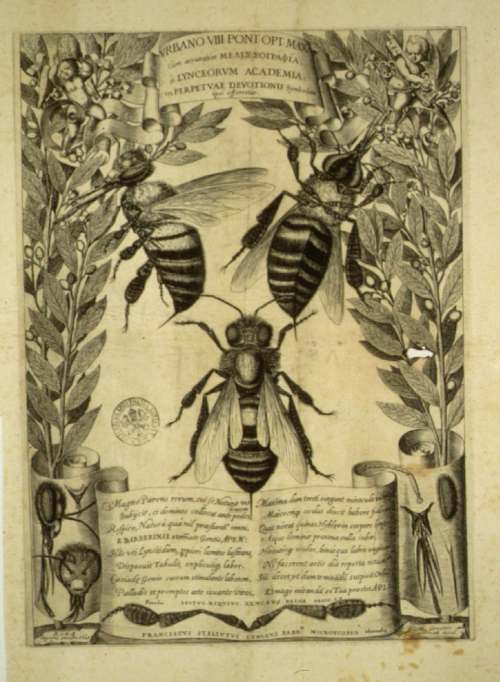 Stelluti published further microscopic studies of bees in a Tuscan translation of an obscure Latin poem in 1630. 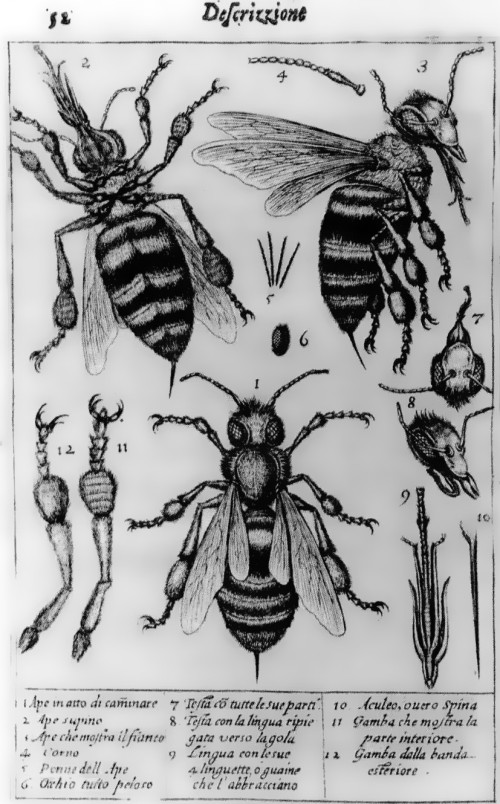 Both publications were only distributed to a very small circle and had little or no impact. In 1644 Giovanni Battista Odierna published a pamphlet of his microscopic studies of the fly’s eye, his L’Occhio della mosca. 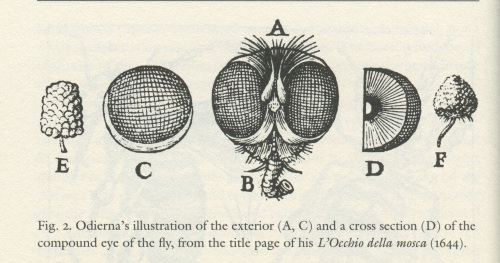 In 1656 Pierre Borel published a collection a collection of a hundred miscellaneous microscope observations, his Observationum microscopicarum canturia.

Both publications failed to make any real impact. Both only had minimal distribution and Odierna’s pamphlet is thought to have been too specialised, whereas Borel’s drawings are almost childish in their primitiveness. The originals are actually much smaller than the scan shown above.

Public demonstrations of the microscope by Drebbel and other instrument makers were very popular throughout the seventeenth century but these also failed to launch the microscope in the way Sidereus Nuncius had launched the telescope, why? Interested participants would acquire an, anything but cheap, instrument, set it up in their living room, look through the eyepiece and see absolutely nothing! Anybody who can remember their first childhood experience of looking through a modern, optically good quality microscope should remember their initial difficulty in discerning anything at all. Visual perception through a microscope is very different to unaided visual perception and has to be learnt. Lenses in the seventeenth century were notoriously very, very bad quality making telescopic observations difficult enough. The problem was considerably worse for early microscopes. Faced with these optical problems most purchases simply gave up. In 1660, fifty years after Galileo’s Sidereus Nuncius had launched the telescope on its scientific journey the microscope had made next to no impact on the scientific world. This would change dramatically just five years later with the publication of Hooke’s Micrographia.

Various seventeenth century natural philosophers had experimented with the microscope and one of these was Christopher Wren who had made various microscopic studies, which he had not attempted to publish. Charles II got to see Wren’s drawings and requested his newly founded Royal Society to follow up on Wren’s investigations. For whatever reason Wren had no interest in the project and so the Royal Society commissioned their curator of experiments, Robert Hooke, to take up the Royal request. Having first determined that Wren, who had been Hooke’s earlier employer, had no objections Hooke took up the challenge. Each week he would investigate a new object with his microscope making excellent drawings of his efforts and then present the results to the Society at their weekly meetings. Some of the investigations were his own and some where suggested by the Society’s members. Over the months Hooke thus accumulated a large collection of such studies.

In its early years the Royal Society suffered under a problem of public perception. Who were these funny men who met once a week to discuss science and what was the sense of their discussions? Many of the answers to these questions were anything but complimentary. To improve their public image the society went on the offensive. One result of this was Thomas Sprat’s The History of the Royal Society of London, for the Improving of Natural Knowledge (1667), which was more a work of justification than history. As a concrete example of their endeavours to improve natural knowledge the Society decided to publish Hooke’s collection of microscopic studies. This work, the Micrographia, was actually published in 1665 two years ahead of Sprat’s history.

The Micrographia is a masterpiece, a magnificent scientific coffee table book, which contains many of Hooke’s thoughts on science, scientific method and nature but what really makes the book and made it into the scientific bestseller which launched the microscope is Hooke’s stunning illustrations. 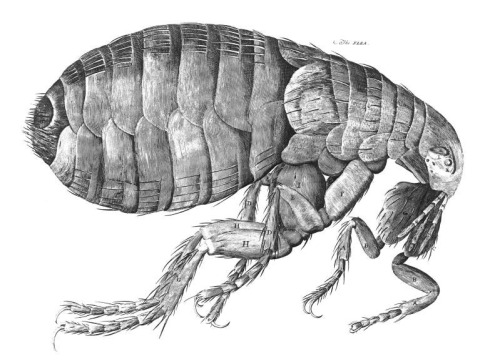 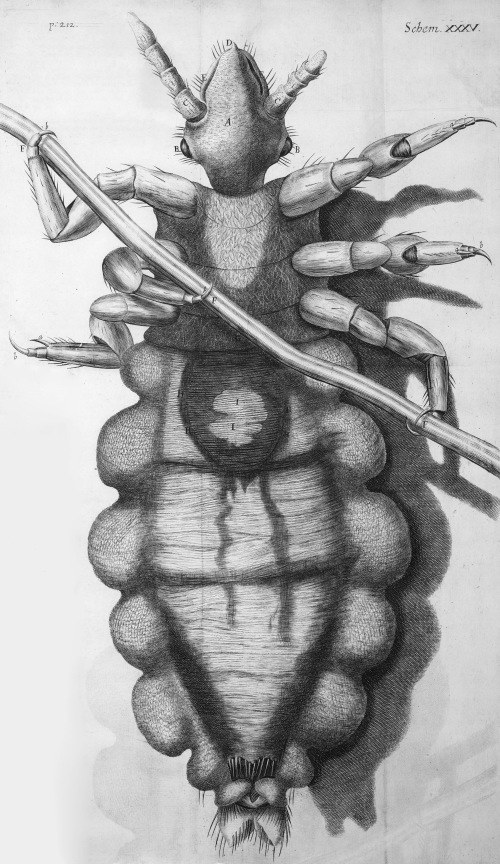 The book hit the scientific book market like a bomb, to quote Matthew Cobb from his excellent The Egg & Sperm Race:[1]

Micrographia or Some Physiological Descriptions of Minute Bodies Made by Magnifying Classes with Observations and Inquiries thereupon, to give Hooke’s book its full title, was an instant and hugely influential success. Pepys saw the unbound sheets in a bookshop and immediately decided to buy a copy. When he eventually got his hands on it, on 21 January 1665, he wrote in his diary: ‘Before I went to bed, I sat in my chamber, reading of Mr Hooke’s Microscopical Observations, the most ingenious book that ever Iread in my life’. The Dutch astronomer Christiaan Huygens had to tear himself away from reading in order to write a letter to London congratulating the Royal Society on the amazing quality of the observations. Pepys and Huygens were right. Hooke’s book is simply astonishing.

Matthew is right. Hooke’s book is truly astonishing and it certainly helped to improve the Royal Society’s public image. The book also signalled an astonishing period of microscopic activity by Macello Malpighi in Italy, Jan Swammerdam and Antonie van Leeuwenhoek in the Netherlands and Nehemiah Grew in London all of whom, interestingly, published all or some of their results through the Royal Society. The microscope had truly arrived as a scientific instrument.

[1] Matthew Cobb, The Egg & Sperm Race: The Seventeenth Century Scientists Who Unravelled the Secrets of Sex, Life and Growth, The Free Press, 2006.