The other professor of mathematics at Wittenberg.

Anybody who knows a bit about the history of astronomy in the early modern period or who has wasted their time and money reading Dava Sobel’s last perversion of the history of science will know that Copernicus was finally persuaded to publish his De Revolutionibus by Georg Joachim Rheticus who was professor of mathematics at the University of Wittenberg. To be precise he was appointed professor for the lower mathematics, i.e. arithmetic and geometry, by Phillip Melanchthon in 1536. In the same year Melanchthon appointed Erasmus Reinhold, who was born on 22nd October 1511, professor for the higher mathematics, i.e. astronomy and music. Like his colleague Rheticus, Reinhold made a significant, but less well-known, contribution to the reception of Copernicus’ heliocentricity.

Reinhold was the son of Johannes Reinhold, a tax collector, from Saalfeld in Thüringen. He entered the University of Wittenberg as a student in the winter semester 1530/31 graduating MA in 1535 and as already noted above being appointed professor in 1536. He remained in Wittenberg the rest of his life serving terms as dean of the faculty of arts and as rector of the university. He died in 1553 probably of tuberculosis. He was respected as a practicing astronomer and was considered and excellent teacher.

To understand Reinhold’s contribution to heliocentricity one first has to consider the function of mathematical astronomy. Since at least the first algebraic astronomical models of the Babylonians up to the seventeenth century the main function of mathematical astronomy was to supply accurate predictions of the positions of celestial bodies and the occurrence of celestial phenomena such as lunar and solar eclipses; this data then being utilised by astrologers, navigators, cartographers and others. The mathematical models of the cosmos produced by Ptolemaeus and others described and traced the movement of the various heavenly bodies, in order to make the positional predictions those movements had to be turned into data tables showing the weekly/daily/hourly positions of those bodies; these list of data are known as planetary tables or ephemerides. Various sets of tables that had been calculated for the geocentric models were already in existence and their inaccuracies were one of the major driving forces behind moves to reform mathematical astronomy throughout the fifteenth and sixteenth centuries of which Copernicus’ De revolutionibus was one result. Copernicus had not calculated planetary tables for his heliocentric model and this task fell to Erasmus Reinhold.

Using modified versions of the models supplied by Copernicus, in his magnum opus, Reinhold calculated the first ever set of heliocentric planetary tables, financed by and dedicated to Albrecht Duke of Prussia, they were titled the Prutenicae Tabulae Coelestium Motuum, which translates as the Prussian Tables of Celestial Motion. They were originally destined to be published by Johannes Petreius, who had published De revolutionibus, but he died before they were finished and so the first edition was published by Ulrich Morhard in Tübingen in 1551. Morhard’s widow produced a reprint of the first edition in 1562. A second edition was edited by Michael Maestlin, Kepler’s teacher, in Tübingen in 1571. A third edition was published in Wittenberg in 1585. 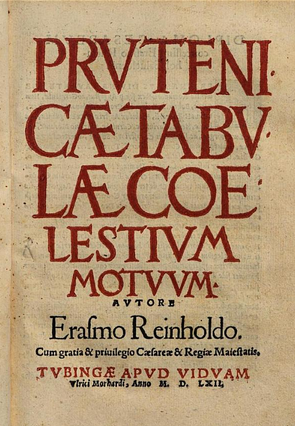 The tables were eagerly awaited by the sixteenth century astronomical community, irrespective of whether they believed in heliocentricity or not, with the hope that Copernicus’ new mathematical models would deliver more accurate predictive data than the older tables based on the geocentric models. Unfortunately this proved not to be the case. In some aspects the new tables were better than their predecessors, in others about the same and in some even worse. This failure to deliver was due to the fact that the data on which the Copernican models were constructed was the same defective or inaccurate data as that on which the earlier geocentric models had been constructed. It also severed to slow down the acceptance of a heliocentric cosmology.

The inability of both the geocentric and the heliocentric planetary tables to deliver accurate celestial predictions is what started off a young Tycho Brahe (who died 24 October 1601) on his twenty-plus years programme of astronomical observation in order to obtain a new accurate set of basic data on which to construct planetary orbit models. It was using Tycho’s vast collection of data that Kepler was able to construct his elliptical heliocentric astronomy. The tables that Kepler then calculated using his models and Tycho’s data, the Tabulae Rudolphinae or Rudolphine Tables named after the  römisch-deutsche Kaiser Rudolph II who financed them, finally did the trick. Compared with all of their predecessors the Rudolphine Tables were extremely accurate and they were the major factor in persuading people to adopt a heliocentric cosmology and in fact a Keplerian elliptical world view and not a Copernican one as is often falsely claimed.

12 responses to “The other professor of mathematics at Wittenberg.”