Sometime ago I wrote of the 18th century French astronomer Guillaume Le Gentil and the misfortune that he suffered in his attempts to observe the transits of Venus in 1761 and 1769. Although nobody could possibly compete with him when it comes to bad luck in pursuit of science he was not alone in suffering adversity whilst trying to capture the goddess of love in her brief journey across the face of the sun. The American clock and instrument maker David Rittenhouse, who was born 8th April 1732, has also gone down in the annals of the history of astronomy as one of Venus’ ill-starred victims. 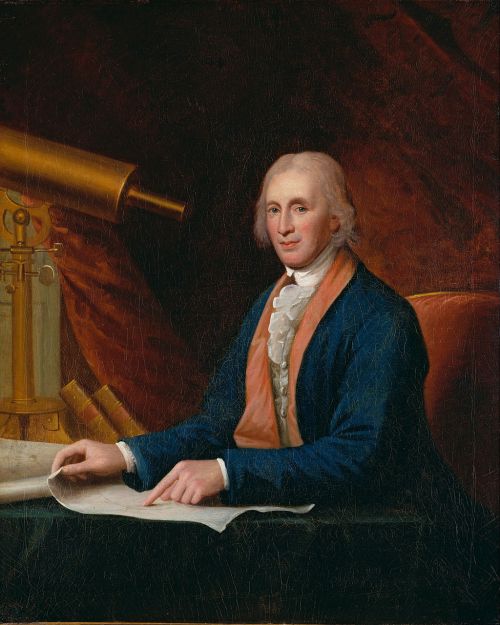 The Venus transit of 1761 had not been visible from the British Colonies on the American Eastern Seaboard. This meant that the still relatively young American Philosophical Society of Philadelphia was all the more keen to make a good showing in observing the 1769 transit. One of those who agreed to set up an observing station was David Rittenhouse who lived someway outside of Philadelphia on his farm.

Rittenhouse was an enthusiastic amateur astronomer and the transit was without doubt a highpoint in his life as a scientist and so he invested an extraordinary amount of effort in preparing for the occasion. He built a temporary observatory on his land that he preceded to equip with the finest instruments, all of which, with the exception of the telescopes, he constructed himself. He designed and built a new super accurate clock with which to time the transit as well as a set of precision astronomical instruments. He worked long hours every day for a year preparing for the great event. In the month before the transit his overwork took its toll and he fell ill with a chill.

On the 3th June 1769 a team of three observers including Rittenhouse took their stations at their instruments in Rittenhouse observatory to wait for the start of the heavenly spectacle. Weakened by illness, exhausted by a years worth of strenuous work and exited by the once in a lifetime event he was about to witness, as the transit was about to commence Rittenhouse fainted! By the time he had recovered his senses he had completely missed the, for the determination of the astronomical unit (the distance between sun and earth), so important first contact between Venus and the sun. He was able to observe and record the rest of the transit without incident.

David Rittenhouse’s home as it appeared c. 1919. From its lawn, in 1769, Rittenhouse observed the transit of Venus, or rather didn’t! Source: Wikimedia Commons

Rittenhouse and his team actually produced the best transit observation results in the colonies but their detailed report contained no mention of Rittenhouse’s misfortune. Rittenhouse made many important contributions to the scientific life of the young American States and is regarded as one of America’s important early scientists but he’ll also be always remembered in the history of astronomy as the man who worked so hard to witness a once in a lifetime event and then missed it.