James Gregory did not invent the reflecting telescope.

Now it might be argued that the one who was first is entitled to say that he invented the reflecting telescope but even this would not be correct. Gregory published his design for his reflecting telescope in 1663 but failed in his attempts to produce a working model of his device. Newton produced the earliest known function model of a reflecting telescope in about 1668, presented one to the Royal Society in 1671, which led to his election to that august body and published a paper describing his design in the Philosophical Transactions of the Royal Society in 1672. In the same year Jean-Baptiste Denys published a letter in a French journal claiming that Cassegrain was the first to design a reflecting telescope much to the annoyance of Newton. All three designs were distinctively different and Newton’s was the only one of which a working model existed, although it would be more that fifty years before John Hadley succeeded in producing working copies of Newton’s telescope and would then go on to do the same for the Gregorian. It would be quite late in the 18th century before working models of the Cassegrain were produced. 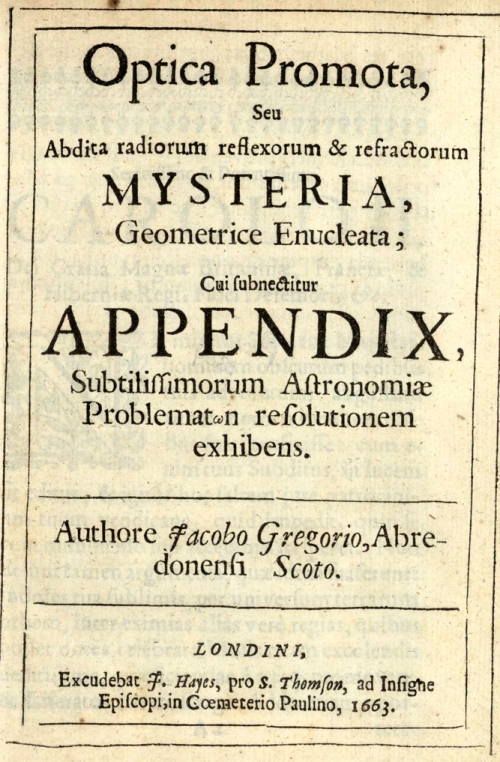 James Gregory’s Optica Promota (1663), which contained the first publication of the design for his reflecting telescope

Now one could argue for Newton as the inventor of the reflecting telescope as he produced the first functioning example of one but there is no denying that Gregory and possibly Cassegrain preceded him with the concept of the reflecting telescope. However if one were to take the concept rather than the realisation as criterion then none of our 17th century trio would take the laurels, as the concept has a long history stretching back to at least the 1st century CE.

The earliest known presentation of the optical principle of the reflecting telescope can be found in the catoptrics of the 1st century Alexandrian mathematician, engineer and inventor Hero. He clearly demonstrates the fact that a concave parabolic mirror focuses parallel rays reflected from its surface at a point, creating an image. In our times one can see Hero reflecting telescopes on the roofs and balconies of numerous buildings in all of the towns and cities of the world in the form of television satellite dishes. This telescopic property of parabolic mirrors was well known to Leonardo who discusses it in one of his unpublished manuscripts. In the early 17th century, after the introduction of the refracting or lens telescope, the Jesuit mathematician and friend of Galileo Niccolò Zucchi constructed a simple reflecting telescope with a bronze mirror in 1616 but was unable to construct and polish his mirror accurately enough to produce a usable image. In fact Zucchi’s failure illustrates the major problem in the construction of reflecting telescopes. Mistakes in the curvature or surface of the mirror distort the image to the point of uselessness with a factor of six greater than similar errors in the polishing of lenses. It is a mark of Newton’s abilities as a technician and craftsman that he succeeded in constructing and polishing a functioning mirror. Around 1640 Marin Mersenne also published several designs for reflecting telescopes but never tried to realise them, probably because he was aware of the technical problems involved.

I hope you can see from my very brief outline of the history of the reflecting telescope that claiming one individual as the inventor is to say the least problematic, not least because one first has to decide if the originator of the concept or the producer of the first working model is actually the be considered the inventor, and as a historian it is preferable to refer to the originator of one or other of the various models as an inventor of the reflecting telescope.

13 responses to “James Gregory did not invent the reflecting telescope.”