In the early 18th century the whole of France was in the grip of Cartesian physicists, the whole of France? No! A small centre of Newtonian resistance existed on the country estate, Cirey-sur-Blaise, of Gabrielle-Émilie Le Tonnelier de Breteuil, Marquise du Châtelet. Apart from du Châtelet the group consisted of her lover François-Marie Arouet better known as Voltaire, the polymath Pierre Louis Moreau de Maupertuis and todays birthday boy the mathematician and astronomer Alexis Claude Clairaut who was born in Paris on 7th May 1713. 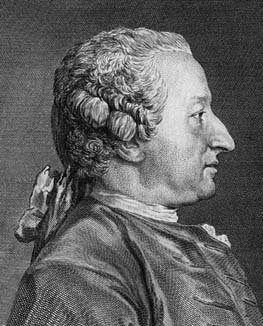 The son of a mathematician and the only one of twenty children to survive into adulthood Clairaut was a child prodigy who started studying calculus at the age of eleven and read his first original paper before the Paris Academy at the age of fourteen. Proposed for membership in 1729 he became the youngest ever member of the Paris Academy of Science when elected in 1731. Here he became friends with the older Maupertuis, a friendship that would contribute significantly to the acceptance of Newtonian physics in France.

In the 1730s Clairaut accompanied Maupertuis on the expedition to Lapland in order to measure a meridian arc to settle the dispute between the Newtonians and the Cartesian Cassinis as to the shape of the earth the results of this expedition and a second one to Peru proving Newton right and delivering an indirect proof for the diurnal rotation of the earth. The definitive account of this Newtonian victory was delivered by Clairaut in his Théorie de la figure de la Terre published in 1743.

Having struck a decisive blow for the Newtonians, Clairaut almost scored an own goal. During his attempts to determine the orbit of the moon, which because it is pulled in two different directions at once by the earth and the sun is a very complex problem that even Newton failed to solve, Clairaut thought he had proved that Newton’s law of gravitation was wrong. Having checked his results he published a paper with his conclusions that were even accepted by the best mathematical physicist of the age, Leonard Euler.  Fortunately for Clairaut but less so for Euler he discovered his own error before anybody else did and before the Cartesians had even finished celebrating this blow against the enemy and published a second paper showing that Newton was right after all and that his data had been at fault.

Using the knowledge won from his calculation of the moon’s orbit Clairaut next re-calculated the orbit of Comet Halley and was able to determine its date of perihelion in 1759 to within one month of the correct date a level of accuracy that ensured Clairaut’s fame and proved the turning point in the acceptance of Newton’s gravitational theory; as a final service to Newton Clairaut was very actively involved in du Châtelet’s translation of the Principia into French.

Beyond his championing of Newtonian physics Clairaut made many significant contributions to the development of mathematics in the 18th century and certainly should be honoured as one of the great mathematicians of that age.

9 responses to “A Gallic Newtonian”