The lunatic who invented fizzy pop.

Darin at PACHS has a nice post about the Anglo-American chemist, educationalist, theologian and historian Joseph Priestley. In his brief description of Priestley’s multifarious activities he left out two of the most fascinating aspects.

Firstly Priestly was “lunatic” that is he was an active member of possibly the most fascinating scientific society that ever existed, The Lunar Society. This 18th century group of science fans and practitioners centred around Charles Darwin’s maternal and paternal grandfathers, Josiah Wedgwood and Erasmus Darwin, met monthly at full moon to facilitate the members journey home in the dark. Apart from Priestley, Darwin and Wedgwood notable other members, some corresponding, were Boulton and Watt of steam engine fame, Benjamin Franklin, James Hutton, Joseph Banks, William Herschel and a host of other scientific worthies.

Secondly it was Priestley, the chemist, who put the fizz into carbonated water thus laying the foundation for the fizzy pop industry, with his Directions for Impregnating Water with Fixed Air from 1772. 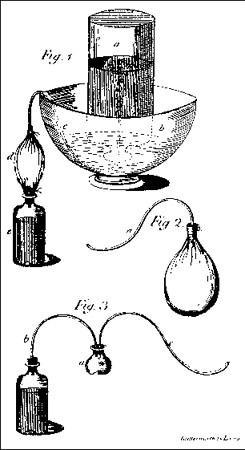 It should be pointed out that Priestley’s life not all sweetness and light. Because of his very vocal support of the French Revolution a conservative mob burnt down his house and church forcing him to flee, which is why one of England’s greatest 18th century scientists became am American.

Filed under History of science

7 responses to “The lunatic who invented fizzy pop.”