Joining up the dots

As a historian I’m a synthesist, which means that I am interested in big pictures not small details. Naturally the small details I use to create my big pictures have to be, as far as possible, factually correct but in general I rely on other historians doing so-called micro-studies to deliver the elements out of which I then create my narratives. One of my central concerns as a synthesist is the breaking down of the artificial barriers that other historians create between disciplines, countries, ages etc. In normal practice the histories of architecture, linear perspective, cartography, exploration, astronomy, typography and printing are treated as separate disciplines in what follows I want to sketch how this all hang together in Italy and Germany in the 15th century. 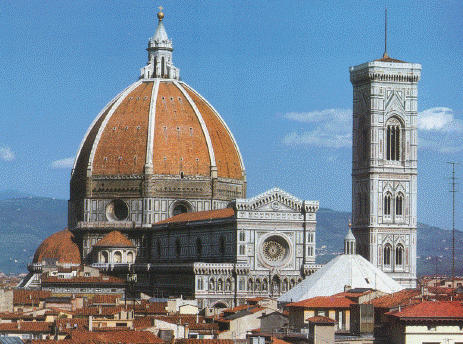 .His other claim to fame in the histories of art and mathematic was his discovery (re-discovery) of the mathematical principles of linear perspective. I wont go into the details of his fascinating perspective demonstrations but that he earns the honours, as the first artist to demonstrate linear perspective in the Renaissance is not in dispute. Now Brunelleschi was by no means the only innovative multi talent in Florence at this time and another one was Brunelleschi’s mathematics teacher Paolo dal Pozzo Toscanelli (1397 – 1482) who is famous for his so-called Columbus letter in which he, as the leading cartography of the age, advised the Portuguese court of the viability of Columbus’ proposed journey to the Spice Island’s, sailing westwards. 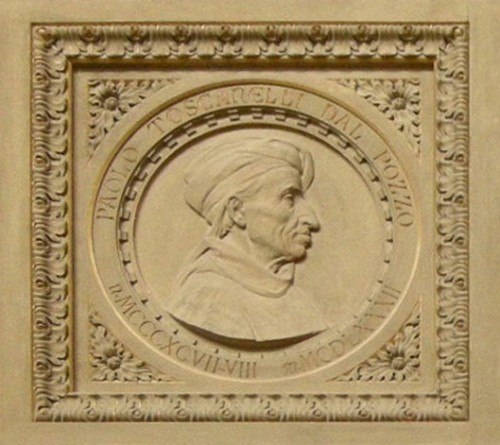 Toscanelli was a well-known mathematician and humanist and received many visitors, one of whom was a young Austrian named Georg Aunpekh (1423 – 1461) who was introduced into the mysteries of astronomical observation by Toscanelli who was also an astronomer. Aunpekh returned to Vienna where he studied, as a mature student, at the university and went on the become a professor and who was regarded under his toponym, Georg Peuerbach as the leading European mathematician and a central figure in the Renaissance of mathematical astronomy.

But back to Florence, where another member of Brunelleschi’s circle was the architect Leon Battista Alberti (1404 – 1472). Now Brunelleschi discovered the mathematical principles of linear perspective but did not publish them, a task that was left to Alberti who wrote and published the first book on the subject.

Now all of the Italians in our story so far were humanists and were active members of one of the humanists circles establish in Italy by the Greek, church diplomat Cardinal Basilios Bessarion (1403 – 1472). 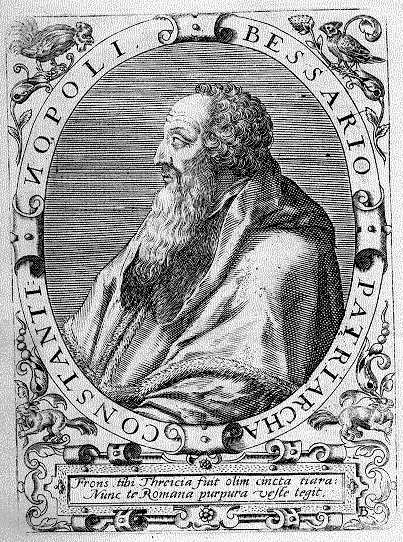 Making a little jump in the chronology of our story, it was Bassarion who in the 1465 established the very first printing press in Italy, near Rome, in order to print and publish humanist literature. For this purpose he imported two printers from Germany, Schwynheim and Pannartz, to carry out the project but it was decided that they would not use Guttenberg’s Gothic type face but that humanist literature required its own distinctive Antiqua type face that was then designed by Alberti.

Meanwhile back in Vienna in 1450, Peuerbach had acquired his most famous pupil Johannes Müller, known to history as Regiomontanus (1436 – 1476).

Having acquired his MA in 1457 Regiomontanus became Peuerbach’s colleague and the two of them set about an extensive research programme in observational astronomy, instrument design and construction and the modernisation and development of mathematics. In 1460 Bessarion came on a diplomatic mission to Vienna where he immediately sought out Peuerbach and requested him to produce a new Latin edition of Ptolemaeus’ Syntaxis Mathematiké (the Almagest). He also invited Peuerbach to join his entourage and accompany him back to Italy when his business in Vienna had been completed. Peuerbach acquiesced to both wishes on the condition that Regiomontanus would also accompany them, which Bassarion agreed to without hesitation. Unfortunately Peuerbach died and so Regiomontanus alone accompanied Bassarion back to Italy where he was introduced to all the leading humanist mathematicians including Peuerbach’s old friends Nicolas Cusanus (with whom Peuerbach had lived together in Rome) and Toscanelli. After ten years of wanderings, study and the collecting of scientific manuscripts in Italy and Hungary, under Matthias Corvinus also a major centre for humanist studies, Regiomontanus returned to Germany and together with Bernard Walther set up a programme of observational astronomy and the worlds first scientific publishing company introducing the humanist Antiqua typeface into Germany. Among the books that they published was Regiomontanus’ Ephemeredes, which Columbus took on his journey to America. Unfortunately his press was very short lived as Regiomontanus died in 1476 but Walther continued their programme of observations up till his own death in 1504 and some of those observations were used by Copernicus in his De Revolutionibus.

Returning to Florence another member of the Toscanelli, Brunellschi, Alberti circle was the painter Piero della Francesca (1415 -1492) who as well as being a famed Renaissance artist was also an excellent mathematician.

He wrote three very good maths textbooks for his patron that included a much deeper and more advanced analysis of the mathematical principles of perspective than that of Alberti. These books were however never published and della Francesca’s work on perspective might have been lost to history if they hadn’t been pirated at the beginning of the 16th century by yet another mathematical member of the group Luca Pacioli (1446 – 1417) who was actually born in the same village as della Francesca. 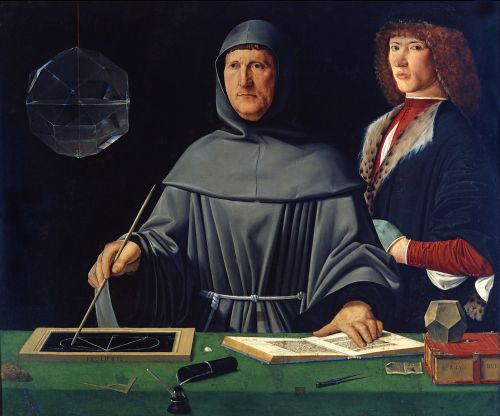 Pacioli’s book on proportion in art was famously illustrated by his own mathematics student Leonardo da Vinci.

During the 15th century perspective painting remained an almost exclusively Italian exercise a fact that was changed at the beginning of the 16th century by Albrecht Dürer who brought the secret of perspective north of the Alps. Dürer travelled from his native Nürnberg to Italy expressly to learn the mathematical art of perspective and although he never revealed who it was that taught him this art, some experts argue that it was Pacioli. After his return to Nürnberg Dürer who was a big fan of mathematics bought the house of Bernard Walther and several books from the collection of Regiomontanus including one of his Euclid manuscript’s. In 1525 Dürer published his knowledge of the geometry of perspective in the first ever mathematics book printed in German, his “With Straight Edge and Compass”. This book was printed in a fraktur typeface designed by Johannes Neudörffer (1479 – 1563) and although this was not the first fraktur typeface it became the model for all future ones. Neudörffer was a writing and reckoning master in Nürnberg who also managed the printing house of his brother in law Johannes Pertreius (1497 – 1550) who printed and published Copernicus’ De revolutionibus in 1543. Copernicus by the way learnt his astronomy from the books of Peuerbach and Regiomontanus, which he quotes extensively in his magnum opus.

Often joining up the dots in history takes one on a strange journey.

8 responses to “Joining up the dots”