An important anniversary in the history of science.

The 24th of November is a very significant date in the history of science. On this date an event took place that would contribute to a major change in the way humanity viewed the world and its place in it. On this day in 1639 the British astronomers Jeremiah Horrocks and William Crabtree became the first observers to record a transit of Venus. *

If people list the supposedly great astronomers who made major contribution to the evolution of astronomy in the 17th century they almost never mention Horrocks but they should. Born in 1618 in Toxteth Park, now part of Liverpool, Horrocks he went up to Emmanuel College Cambridge in 1632. Whilst in Cambridge he became interested in astronomy and because the mathematical sciences where not taught at that time he acquired the astronomical texts of the age and taught himself mathematics and astronomy. Wanting to acquire the most modern astronomical tables he obtained a copy of those of Philip Landsberge but soon determined that they were inaccurate. Looking for better tables he came across the then still relatively unknown Rudolphine Tables calculated by Johannes Kepler from the data collected by Tycho Brahe. Realising that these were far superior to Landsberge’s Horrocks became a convinced Keplerian and later with Crabtree and William Gascoigne, who introduced the cross-hairs into the telescope ocular, he formed a group calling themselves “Nos Keplari” dedicated to propagating the elliptical astronomy.

However even Kepler’s calculations were far from perfect and Horrocks, still a teenager, set about correcting errors in the Rudolphine Tables. He realised that Kepler had made an error in his calculation of the orbit of Venus and that there would be a second transit of Venus in 1639 eight years after the one predicted by Kepler for 1631. Having left Cambridge in 1635 Horrocks was installed as a private tutor to the Stone family in Much Hoole in Lancashire and it was here that he made the first ever observation of a transit of Venus. This proved that Venus like Mercury, whose transit had been observed by Pierre Gassendi in 1631, orbited the Sun and not the Earth a highly significant step on the way to the acceptance of heliocentricity. 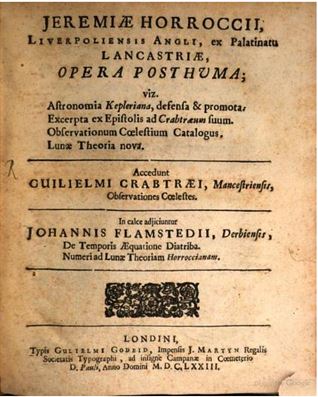 If this had been Horrocks’ only achievement it would place him in the top grade of 17th century astronomers but there was considerably more. Based on a rather dubious piece of Keplerian number mysticism Horrocks used a parallax measurement made during the transit observation to calculate the size of the astronomical unit, the distance between Earth and Sun, and although his figure of 59 million miles was way below the real figure of 95 million miles it was significantly larger that all previous estimates and played a role in the reconsideration of the dimension of the solar system that took place in the 17th century. Horrocks also tackled the problem of the Moon’s orbit. Kepler had not included the Moon in his elliptical astronomy because had he done so it would have caused him great problems with his astrophysics in which he claimed that the planets were moved by a magnetic force emanating from the Sun. Horrocks now provided the missing Keplerian elliptical orbit for the Moon, a model that was taken over by Flamsteed and also by Newton in his Principia. The Moon’s orbit is highly irregular and extremely difficult to capture mathematically and although still deficient Horrocks’ Moon model was the best one produced up till the 18th century; the problem of the Moon’s orbit was finally solved by Laplace. Horrocks’ also made significant contributions to that which would become the theory of gravity.

All of this would be highly impressive for any 17th century astronomer but it should be noted that Horrocks died in 1640 aged only 22! There has been much speculation as to what he might have achieved if he like Newton had lived into his eighties.

** Actually it’s not the same date as Horrocks made his observation on 24th of November by the Julian calendar and Darwin’s book was published on the 24th by the Gregorian calendar.

19 responses to “An important anniversary in the history of science.”